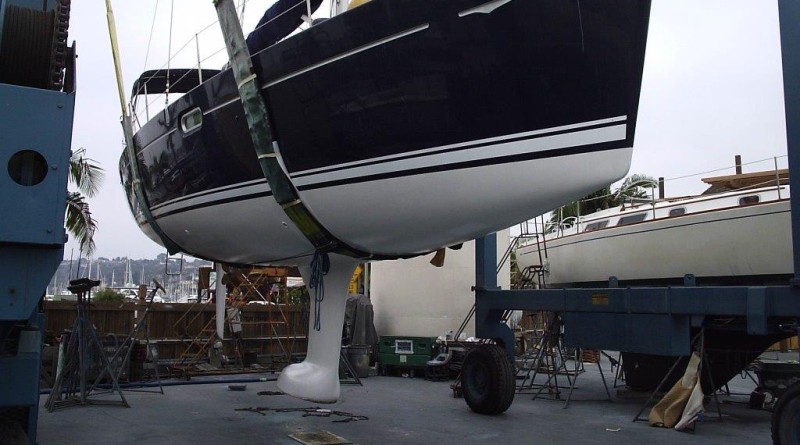 The Port of San Diego is ahead of schedule in reducing copper but acknowledges more work needs to be done. Several vessel owners have participated in the 319h Hull Paint Conversion Project in an effort to lower the amount of copper in the bay. Port of San Diego photo

Port of San Diego is ahead of schedule in reducing copper but acknowledges more work needs to be done.

SAN DIEGO — Copper levels in Shelter Island Yacht Basin have significantly been reduced since a San Diego water quality board established a Total Maximum Daily Load (TMDL) mandate for recreational boaters, marinas, yacht clubs and hull cleaners in 2005 – but work still needs to be done during the next six years to sustain current progress.

The Port of San Diego’s Board of Port Commissioners received an update of Shelter Island’s TMDL progress during its June 15 meeting.

Karen Holman, the port district’s principal of planning and green port, told commissioners the combined efforts of boaters and port vendors have helped the district compile more accurate data to monitor progress toward the mandated 76 percent reduction in TMDL levels by 2022.

The Unified Port District of San Diego, as reported in the June 3 edition of The Log, claimed it met its 40 percent TMDL reduction ahead of the San Diego Regional Water Quality Control Board’s 2017 deadline.

“If the program continues on track copper levels should stay at or below the targets,” said Holman who added that while the path is promising more work still needs to be done to ensure the district realizes the 76 percent daily load reduction by 2022.

She explained the port district’s tracking of vessels at Shelter Island to monitor efforts to reduce copper levels in the yacht basin have progressed since 2005, when the water quality board’s mandate went into effect.

There are seven monitoring stations – six within the Shelter Island basin and a seventh placed in the harbor for comparative purposes.

“We collect surface water from each station and then we come up with a basin average. We compare this basin average to previous years and to the baseline,” Holman said, adding the data is showing, over time, reductions in daily load of copper and improvements in water quality within the basin.

She added 1,037 out of 2,175 vessels at Shelter Island assisted in the copper load reduction effort in 2015. Of the 1,037 participating vessels 641 used aged paint, while 204 opted for low-leach (or Category I) paints approved by the Department of Pesticide Regulation. Another 142 boaters used non-copper paints and 50 vessels were painted with low-copper formulas.

Laurie Walsh of the San Diego Regional Water Quality Control Board acknowledged the port district is ahead of schedule but still needs to be proactive to make sure it arrives at the mandated goals by 2022.

“The district is required to annually assess our progress on reducing copper in the basin. We do this by tracking load reductions from vessel conversions and the uses of hull cleaning best management practices,” Holman told commissioners.

She added the port district realized several key initiatives in 2015, including the development of an updated paints list, completion of a hull paint conversion grant and “improved scientific understanding of copper inputs to the basin.”

“Our five-year hull paint transition grant was completed and this project converted 41 boats to non-biocide paints, and this helped reduce copper loading into the basin by 38 kilograms per year,” Holman said.

Port officials also worked with the Department of Pesticide Regulation to identify paints meeting low-leech rate criteria and had the information released to the public.

The final phase of the Regional Water Quality Board’s 17-year TMDL plan will go into effect in 2018.

Port staff stated it would evaluate strategies of how to continue reducing copper while improving ecosystems in San Diego Bay.

“Such strategies include activities that can improve the waters and sediments such as testing pilot concepts for copper remediation, assessing the feasibility of constructing a culvert between Shelter Island and America’s Cup Harbor to increase water flow within the basin and conducting an enhanced water quality study to better understand the water quality in the basin both at the surface and at depth,” port staff stated.

The port district is also drafting a five-year work plan to execute the final TMDL phase. The work plan would outline estimated costs to ensure the Regional Water Quality Board’s mandate is met by 2022.

While port staff and the Board of Port Commissioners commended each other for a job well done all parties acknowledged challenges still remain as the final phase of the TMDL mandate nears.

“Copper paint remains the paint of choice for boaters and a large component of this reduction was documented to be from aged paint on vessels,” port staff stated in a report to commissioners. “Achieving future paint-related load reductions will be dependent on boaters either delaying the repainting of their vessels, using [Department of Pesticide Regulation] Category I paints, or transitioning to alternative paints, a concept which, to date, has been challenging.”

The port’s fleet of boats use non-copper paints; about 136 slips were vacant in 2015.

While the Shelter Island Yacht Basin was the first California marina to be subject to TMDL restrictions other cities and counties soon faced similar cooper-reduction mandates.

In 2014 the Los Angeles Regional Water Quality Control Board required Marina del Rey to reduce its copper load by 85 percent through 2024.

The program would give boaters an incentive to purchase inflatable boat lifts.

“The inflatable boat lifts will raise the boats out of the water when docked, which stops passive copper leaching while the boats are not in use,” a January 2016 county report to the Board of Supervisors stated, adding each lift would cost between $3,000 and $5,000.

Implementing this program could help reduce the copper load in Marina del Rey’s waters by about 5 percent, according to county staff.

Meanwhile the Santa Ana Regional Water Quality Control Board is working to implement a TMDL plan for boaters, boatyards and marina operators in Newport Harbor. In 2015 the Santa Ana water quality board proposed a TMDL plan to reduce copper discharges from boat hulls by 83 percent within 15 years.

The proposal is still being vetted and must be approved by the State Water Board and U.S. Environmental Protection Agency (EPA) before going into effect.

Shelter Island Yacht Basin, Marina del Rey and Newport Harbor are the only three boating venues in Southern California where a TMDL plan with restrictions on hull paints for recreational vessels in place or in development.