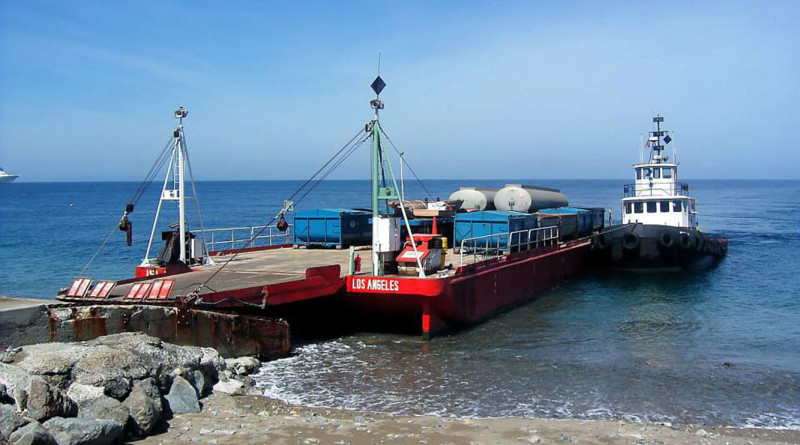 AVALON — The company handling shipments of food and other essential goods to the residents and visitors of Catalina Island could be replaced by another freight line in 2016 and the change has some people crying foul.

Catalina Freight Line has delivered inventory for markets, restaurants and other important goods to the island for more than 40 years. Since then, it has been the only company to ship packages, food, furniture, appliances, vehicles, small boats, fuel, heavy equipment, pets and waste to and from Catalina.

The Santa Catalina Island Co., which owns the warehouse and docks where the freight line arrives daily, solicited proposals from eight companies to provide shipping services to Avalon, Two Harbors and other island locales for the next 29 years.

Now, it is proposed that Avalon Freight Services replace Wilmington-based Catalina Freight Line as the shipping company of record as of April 1, 2016.

A representative of the Santa Catalina Island Co. said the selection process was competitive and resulted in Avalon Freight Services outbidding Catalina Freight Line and six other shipping companies to service the island.

Santa Catalina Island Co. Senior Vice President Kris Wilhelm said his company had the option to extend its lease with Catalina Freight Line but instead opened up the lease opportunity to other vendors, making the process competitive.

“In our minds there was a competitive process,” Wilhelm said at a recent City Council meeting. “All eight of the bidders understood what that competitive process was. Nobody complained about the process. Everyone understood there would be one selected tenant for the warehouse space. We feel like it was very well vetted. There was a broad representation of firms that were bidding for the service.”

Two council members asked whether the marketplace was as competitive as the selection process. Could two shipping companies co-exist at the shipping dock instead of one?

The amount of space available for freight services to the island only allows for one vendor to operate, Wilhelm said, potentially making it too crowded for multiple carriers to safely operate.

Council member Joe Sampson said allowing only one shipping company to and from the island constituted a monopoly on the marketplace.

“I’ve had absolutely unanimous support for a competitive freight service to Catalina,” Sampson said during the April 21 City Council meeting. “I haven’t had one person that I know of come up to me and say, ‘I want a monopoly for a freight service.’ We’re trying to make a commitment to a freight service for the next 29 years. I think it’s important we select the right option here.”
Steve Bray, who operates Steve’s Steakhouse and Maggie’s Blue Rose on Crescent Avenue, said he has millions of pounds of food delivered to his restaurants aboard the freight vessels and supports a competitive shipping marketplace to help manage his costs. He pondered whether he would not have been allowed to open Maggie’s Blue Rose, a Mexican restaurant, last year because Coyote Joe’s, which serves Mexican food, has operated in Avalon for decades.

“In a free market place you have two grocery stores, you can go to either one and find the best deal or you can pick whatever deal you want. I think a lot of people in the community say, why can’t we have that when it comes to freight service,” Marshall rhetorically asked during the April 21 council meeting.

An attorney for the shipping company wrote in a letter to Port of Los Angeles staff in November 2014 that the only agency with power to terminate Catalina Freight Line’s service to Avalon was the California Public Utilities Commission (CPUC).

“CPUC is the only agency or entity with the legal authority to terminate Catalina Freight Line, Inc.’s right to transport freight to and from Catalina Island, not the Los Angeles Harbor Department or the Santa Catalina Island Company,” attorney Daniel Reidy said.

The CPUC ruled in 2007 it supports “expanded competitive access” of shipping services to Catalina Island.

“This commission has long supported expanded competitive access to Catalina boat service operators,” the commission stated in its decision, citing a 1982 CPUC ruling promoting competition in the water vessel industry.

Commissioners ruled in 1982 it would “not limit carrier entry into the water vessel market simply to protect the interests of existing carriers.”

“We will allow competition whenever to do so is not adverse to the public interest,” the commission ruled in the case of Pacific Towboat and Salvage.

Another CPUC ruling in 1997 said the market for Catalina shipping was ripe for competition.

“Even though the market appears to be relatively finite, competition for the Catalina service has historically been vigorous, with new entrants appearing from time to time, sometimes successfully and sometimes not,” the commission stated in its 1997 ruling of a matter involving Catalina Explorer Co. and Island Navigation Co.

Reidy, however, contended Avalon Freight Services could not be allowed to be the sole shipping company to Catalina Island because his client’s bottom line would be adversely affected.

“Since the CPUC has adopted policies that favor competition of common carriers as being in the public interest, that agency may not issue a Certificate of Public Convenience and Necessity to Avalon Freight Services, LLC to become a vessel common carrier for the transport of freight to and from Santa Catalina Island because of the predatory adverse effects on Catalina Freight Line’s established and authorized freight transport service,” the Catalina Freight Line attorney said.

A website petitioning residents to support a competitive marketplace for freight services, nomonopoly4avalon.com, suggests the allowance of one shipping company to and from Catalina constitutes a monopoly and, if allowed, could result in higher costs, poor customer service and limited drinking water options.