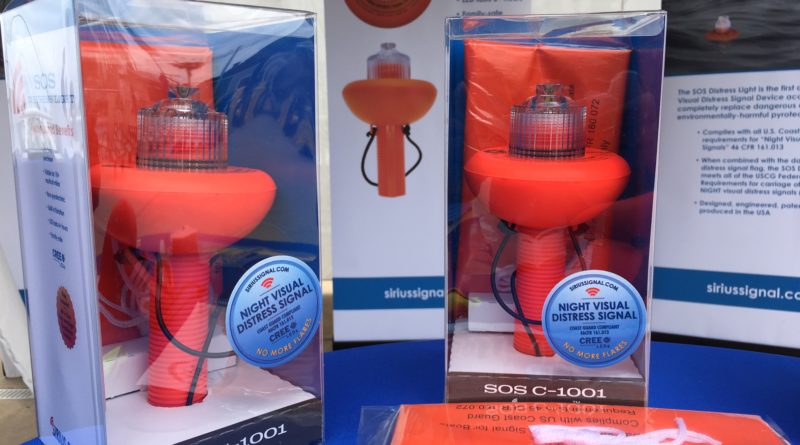 SAN DIEGO — Flares are bad for the environment and do not give boaters the best chance to be rescued in a distress situation. This is the message Sirius Signal is transmitting to boaters as the San Diego-based company officially debuted its non-pyrotechnic SOS Distress Light during a launch event held May 21 at Sunroad Resort Marina.

The SOS Distress Light was introduced in conjunction with National Safe Boating Week as an alternative to marine flares. According to Sirius, the distress light is Coast Guard compliant, does not have an expiration date and, with C batteries, can remain lit for more than six consecutive hours. The high-powered LED light, which has a lifespan of 10,000 hours, can be seen within a 10 mile radius.

Covelli added the SOS Distress Light is highly visible and remains visible significantly longer than pyrotechnic flares. Distress lights similar to the one offered by Sirius have existed for a few years now. However, boaters will be able to take an SOS Distress Light aboard their respective vessels in place of pyrotechnic flares, a non-existent option prior to Sirius’ product launch.

“You can see it for a long, long way,” said Capt. Ann Kinner, owner of Seabreeze Nautical Books in Point Loma. “It’s not something where it’s up there for a couple minutes then it’s completely gone. “The fact it isn’t something you throw is really important. The longer that light stays with you, the more likely you are to be found when you have a problem out there.”

“Flares are dangerous and you can’t dispose of them easily. What if it misfires when you don’t use it?” Stubbs said. “I think [the SOS Distress Light] is the future.”

John Adriany, a principal scientist and environmental engineer who serves as a board member of the Clean Marinas Program, said pyrotechnic flares negatively impact our drinking water.

“Picking these [flares] up, one would know nothing about the chemistry of a flare nor realize there might be an affect to drinking water,” Adriany said.

He emphasized pyrotechnic flares contain perchlorate, a chemical element harmful to water. Perchlorate is virtually impossible to remove from water once the two are mixed, Adriany added.

A statement issued by Sirius Signal pointed out pyrotechnic flares constantly need to be replaced and, when disposed, contribute to toxic waste.

“We’re doing what we can to make boaters realize this is a good thing,” Behun said. “We’ll be putting these [lights] in our marina vessels [and] promoting this amongst our group.”

San Diego Marine Exchange was announced as the first distributor of the SOS Distress Light. According to Covelli, Sirius Signal spent 15 months developing the distress light from concept to product launch, including the Coast Guard certification process and field tests.

The distress light is available for purchase. Covelli said the suggested retail price is $99.95.

Boaters across the United States are expected to dispose of as many as 30 million flares within the next three years, Covelli said.