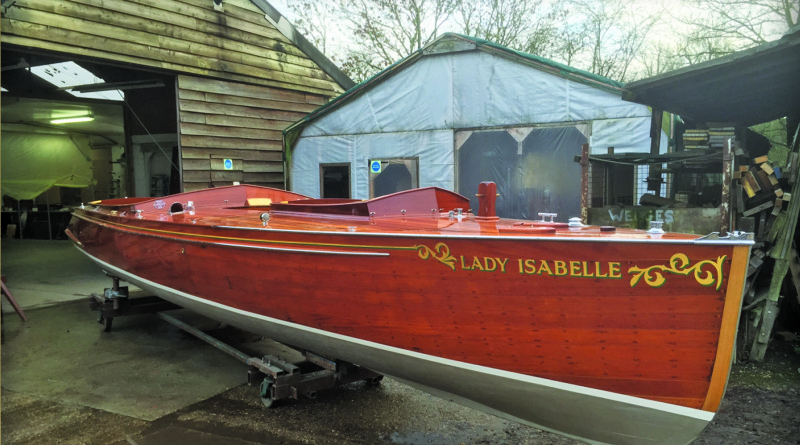 A Slice of History: Lady Isabelle became a part of World War II lore when it was one of several boats used to help evacuate the British Expeditionary Force from Dunkirk, France as part of “Operation Dynamo.”

At least 700 private boats, including Lady Isabelle, navigated the southwestern edge of the North Sea and the English Channel between the United Kingdom and France to save British troops as part of a large-scale evacuation in May 26-June 4, 1940.

Allied troops were reportedly surrounded by the Germans near the France-Belgium border when “the little ships of Dunkirk” came to the rescue and helped evacuate hundreds of thousands of troops during a 10-day stretch.

British troops and their allies were in Dunkirk to help protect the French from German invasion during the early stages of WWII. Germany had already captured Poland in 1939 and advanced through The Netherlands and Belgium en route to France in 1940, sparking the military conflict (and eventual withdrawal) at Dunkirk.

The Back Story: Victoria Fash currently owns Lady Isabelle and first met her while working in London. She also found Humble, a fireboat used during WWII, on the Thames.

“I was based in England for many years with my corporation, and had a home on the Thames River, west of London. Both Lady Isabelle and Humble were moored on the river in my backyard,” Fash said. “My fiancé and I would pack a picnic lunch, and hop aboard Lady Isabelle, and slowly go up and down the river while having our picnic. The English call this ‘Rivertime’ –when you can just forget all your cares.

“Our other favorite thing to do was motor up to Windsor Castle, to a fabulous restaurant there which had a boat mooring, tie her up, and go have high tea,” Fash continued.

“Lady Isabelle was shipped to my home in Newport Beach, via container ship thru the Panama Canal, just in time for the Wooden Boat Festival this year,” Fash said. “We have already had her out several times for champagne and caviar, cruising around the bay. She is a lovely boat to spend time on, as she is open, and has a good amount of space in the main cabin.”

In addition to the Wooden Boat Festival Lady Isabelle will also be on display at the Old Fashioned Day in the Park at Marina del Rey.