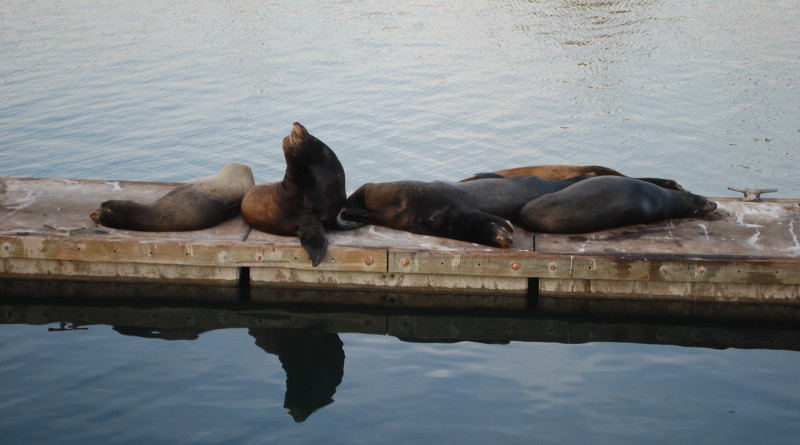 Sea lions lounging on Oceanside Harbor docks is a common sight in the waterway as the pinnipeds continue to occupy spaces in Southern California harbors.Parimal M. Rohit photo

Pinnipeds exist at every harbor, but each city or county addresses the issue in its own unique way.

SOUTHERN CALIFORNIA — Dana Point Harbor recently made headlines when Orange County officials deployed a few air dancers in an attempt to deter sea lions and seals away from guest docks. The plan worked for a while but it is unclear whether air dancers will keep pinnipeds away over the long term.

Nonetheless presence of sea lions and seals at Dana Point Harbor serves as a reminder that boaters must co-exist with marine life. As demonstrated in recent years the pinniped population fluctuates. Each year it seems as if news outlets identify a different harbor as the new area where the local pinniped population shoots up dramatically.

The California sea lion are found along the North American coast between Vancouver Island in Canada to the southern tip of Baja California in Mexico. Male sea lions can reach a top weight of 850 pounds and measure seven feet long. Comparatively female sea lions can weigh up to 220 pounds and grow to 6 feet in length, according to The Marine Mammal Center.

The current California sea lion population, the Marine Mammal Center added, is about 238,000.

Below is a quick look at how sea lion and seal populations have fared at Southern California harbors and marinas.

Perhaps the most unique attempt to manage how pinnipeds interact with humans occurred most recently in Dana Point, where air dancers (commonly found at car dealerships as a means to draw attention to the lot) were placed on boat docks to deter seals and sea lions from freely moving around the harbor and potentially interfering with local boaters.

A spokesperson with O.C. Parks, the county agency that manages Dana Point Harbor, said the air dancers proved to be effective at the beginning but needs to be combined with other measures to minimize pinniped activity in high human traffic areas.

“The air dancers are one element of deterrent options, and initially the air dancers had an immediate effect on the docks where they were placed. The sea lions avoided the area around the air dancers. Sea lions would jump on a dock and, upon seeing the air dancers, would immediately leave,” said O.C. Parks Public Information Officer Marisa O’Neil.

She added over time the air dancers became “less effective” but the county began looking at how the multiple obstacles can be used in tandem to keep seals and sea lions away from docks.

The city of Newport Beach has a dedicated web page to address sea lions and seals in the harbor.

It is not uncommon to see pinnipeds resting on a derelict vessel or on swim steps of boats in the harbor. The city’s web page says sea lions and seals have charged kayakers or regularly target vessel with easy access or without deterrents to enter.

City and harbor officials listed a series of deterrents boaters can use to prevent sea lions or seals coming aboard their vessels. For example equipping a vessel with rollers on railings makes it difficult for pinnipeds to gain traction as they try to climb aboard.

Other deterrents are snow fencing, white netting, and creative uses of physical barriers.

Various attempts to scare away sea lions or seals by loud noise (such as with a firecracker or underwater white noise device) might be effective when first used. However pinnipeds can learn to avoid or ignore the noise over time.

The city also has contracts with two local companies for sea lion abatement.

Oceanside is one of at least two Southern California harbor cities to have a designated space for pinnipeds. The local harbor manager did not believe sea lions and seals pose too great a problem at the boating venue.

“We constructed a dock for them,” said Oceanside Harbor Manager Paul Lawrence, adding seals and sea lions mostly spend time at the designated area but sometimes meander to other docks.

“People love seeing them,” he said.

Pinnipeds have actually provided Oceanside Harbor’s locals and visitors with plenty of photo opportunities, according to Lawrence. Perhaps the most common annoyance is the occasional need to clean up after a pinniped.

Seals and sea lions might make for great photo opportunities today but news reports by KPBS in 2011 and San Diego Union-Tribune in 2012 stated the pinniped population had proliferated and overran Oceanside Harbor.

One reader of The Log expressed his frustration with the high number of seals in the harbor in 2012 (Aug. 30, 2012 issue) stating, “… when we last did get to our boat, we found seals (six of them) on the dock beside our boat. Our boat was covered with seal dung — even up on top of the deck. They spray far and wide, and the smell — OMG! Then, we tried to sleep, with the seals barking all through the night. No sleep for us. I went to shoo the seals away, and one charged at me. Talk about being scared!”

Today the city has a dedicated web page addressing the nuances between seals and sea lions, as well as how to interact with pinnipeds and a reference to the federal law governing human interference with the fin-footed mammal’s natural behavior.

In 2015 it was Redondo Beach’s turn to be the center of media attention, as pinnipeds at King Harbor became a hot topic.

The pinniped population at King Harbor, according to a Daily Breeze report in April 2015, was “out of control.” Shortly thereafter the city of Redondo Beach borrowed a page from Oceanside Harbor and installed a floating dock specifically for sea lions and seals.

Thomas Spencer, who works at Redondo Beach Harbor’s Tarsan Standup, said the floating dock is occasionally populated with sea lions but the pinnipeds still make it to the guest docks.

He recalled one incident where someone informed him a sea lion was giving birth on a dock, though the baby died by the time Spencer arrived at the scene.

Spencer added sea lions are meant to be in colder waters and with climate change it is becoming more common to find young pinnipeds struggling to survive at local harbors.

Tarsan Standup itself initiated a “Save Our Sea Lions” program to recruit volunteers and raise funds to help sick sea lion pups and otherwise assist pinnipeds at Redondo Beach Harbor.

The sea lion population at Marina del Rey has fluctuated in recent years, according to county staff. Pinniped populations were high enough at Los Angeles County’s largest recreational boating harbor a few years ago to cause destruction to older docks.

Currently a few sea lions and seals pop up here and there but overall pinnipeds have not been much of a problem at Marina del Rey right now, the local harbor patrol confirmed.

NOAA’s published report added there is not one proven way to deter sea lions or seals and multiple non-lethal measures must often be employed.

The full report, including limitations on the public and governmental authority, can be found at bit.ly/2bzPgDH.

El Niño conditions and warmer waters off Southern California’s coast have been attributed for the uptick in sea lion and seal activity at local marinas and harbors. Current environmental conditions, according to NOAA and the Marine Mammal Center, have changed what fish species are found in local waters. Accordingly where sea lions or seals might have search for their favorite foods elsewhere could now be finding the same meals along the Southern California coast.

Last year NOAA reported an unusually large increase in the number of sea lion pups stranded on Southern and Central California beaches. There were 3,340 stranded sea lion pups between Santa Barbara and San Diego during the first five months of 2015, according to NOAA, compared to 862 for the same period in 2014 and 1,262 between January and May 2013.