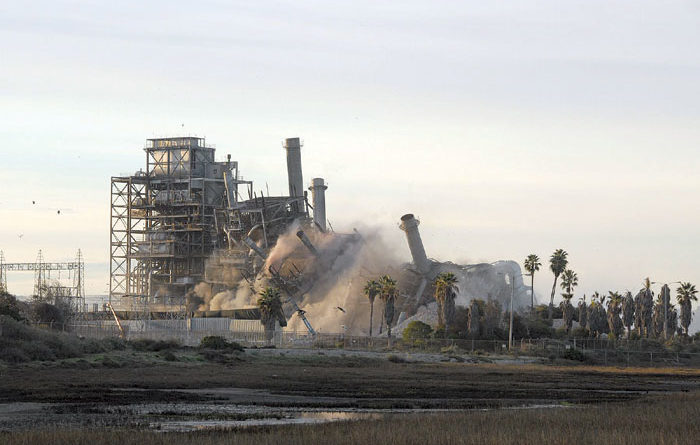 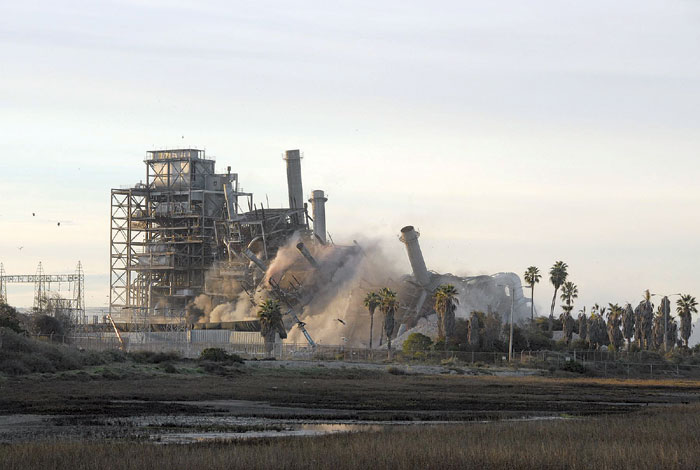 CHULA VISTA — In a matter of minutes, small, controlled explosive charges placed within the decommissioned South Bay Power Plant brought the 165-foot-tall steel-framed structure crumbling down in front of thousands of spectators, on the morning of Feb. 2.

Residents, city officials and other onlookers — several on kayaks — cheered as the plant collapsed during the long-awaited and very public event. Demolition of the plant, long considered a local “eyesore,” marks a new era for the Chula Vista Bayfront and the fulfillment of a promise made by the Port of San Diego.

“The removal of the South Bay Power Plant is a critical step in redeveloping the Chula Vista Bayfront,” said Tanya Castaneda, public information officer for the Port of San Diego. “It eliminates an eyesore, opens up land for future public parks and paves the way for economic development.

“The redevelopment of this site will allow the people of Chula Vista and the San Diego region to finally enjoy access and benefit from the Chula Vista Bayfront,” she said.

“The demolition of the South Bay Power Plant marks the end of an era for a structure that has, famously and infamously, stood on our waterfront for half a century,” Mayor Cox said. “The plant’s implosion was a dramatic example of the progress that has been made over the years to realize the opportunity we have on our portion of San Diego Bay and create the world-class destination our region deserves.”

The implosion plan was carried out by the plant’s former operator, Dynegy South Bay LLC. It followed comprehensive measures to ensure the safety of the public, air and water quality and the environment, according to a statement from the port.

The port acquired the power plant several years ago and pledged to remove the old facility “for the betterment of the San Diego region.”

The site is part of the “shovel-ready” Chula Vista Bayfront Master Plan, designed to provide a makeover for more than 500 acres of waterfront property. Created and developed by the port, the city of Chula Vista and property owner Pacifica Companies, with extensive public input, the plan includes a 24-acre public park, an industrial business park and a mix of residential and retail development. In all, the plan includes more than 240 acres of parks and nature preserve.

Dynegy South Bay LLC’s contractor began removing the metal and other debris on Feb. 4. The demolition is estimated to have generated approximately 25,000 tons of debris, which take about 10 weeks to remove. The port anticipates the vast majority of the material will be recycled or reused.

Cleanup is expected to be completed by the end of 2014.