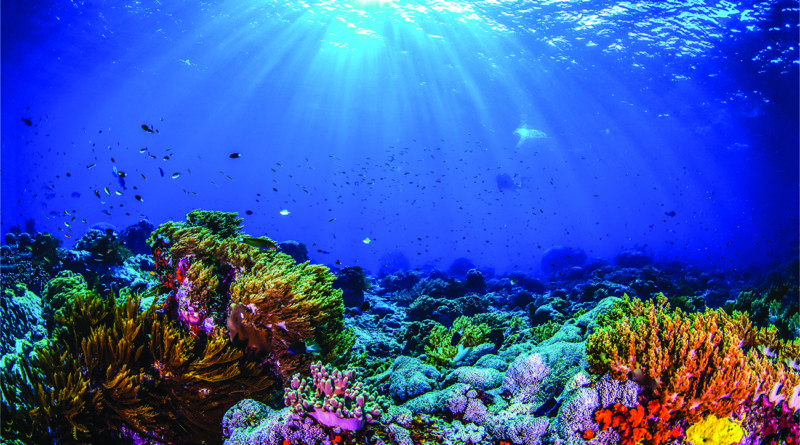 The California Department of Fish and Wildlife began exploring artificial reefs to enhance sportfishing in 1958. There are now 32 CDFW reefs along the California coast and the department is currently evaluating who is using them – and for what purposes.

SOUTHERN CALIFORNIA—Bait, cast, wait, wait some more and sometimes, catch. That’s the fishing experience above the surface. The California Department of Fish and Wildlife (CDFW) has long researched and implemented programs aimed at maintaining sportfishing success in the face of the cumulative effects of increasing fishing pressure as well as negative impacts on the near-shore ecosystem.

Artificial reefs came into the picture in the late 1950s, when CDFW instituted a study to see if things such as automobiles could be dropped in flat, sandy or muddy areas near the shore to imitate rocky coasts and reefs in order to draw more sport fish, such as kelp bass and sheephead, to provide recreational anglers with small boats better fishing closer to harbors.

In 1958 when the study began, little to no full-scale scientific evaluation of artificial reefs had been made, according to an article titled “Artificial Habitat in the Marine Environment,” which was published in CDFW’s Fish Bulletin 124 in 1963. CDFW was working off long-known information that greater numbers and kinds of fishes inhabited rocky coasts, reefs, and banks compared to smooth, unbroken sandy or muddy bottoms.

Divers, during a spread of years following May 1958, performed routine dives to observe and obtain information on kelp growth, numbers and species of fish and invertebrates and other observations. Over the course of 29 dives between May 1958 and November 1960 at the Paradise Cove reef, a high of 24,000 semi-resident fishes was counted, with the average being around 4,200, according to the “Artificial Habitat in the Marine Environment” article. In October 1958, the first naturally seeded young giant kelp plants were discovered and by Jan. 1959 some had grown to 2 feet.

According to the findings published in the “Artificial Habitat in the Marine Environment” article, various perch species made up the greatest number of fishes on the reef, accounting for 74.5 percent of the total, followed by kelp and sand bass, señorita, rockfish, and sheephead.

A similar study was conducted at the Redondo Beach Street car reef, where divers found over 2,800 fishes were concentrated within 25 months, according to the “Artificial Habitat in the Marine Environment” article. After 27 months, the average fish population on the reef consisted of 35 percent kelp bass and sand bass, 26.3 percent miscellaneous seaperch, 11.6 percent gobies, 9.7 percent blacksmiths, and 17.4 percent all other species combined, according to the same report.

In 1960, the department began a study in Santa Monica Bay looking at materials used for artificial reefs, hoping to determine the relative attractiveness for fishes of various materials and the relative life of these compared to cost. Streetcars, auto bodies, quarry rock, and concrete shelters were tested. Observations over several years indicated concrete boxes were the most effective in attracting fishes, with quarry rock a very close second, according to “A Guide to the Artificial Reefs of Southern California” (1989), a booklet authored by Robin D. Lewis and Kimberly K. McKee about CDFW’s artificial reefs. A few years later, CDFW started building more artificial reefs in Southern California with most made of quarry rock, although some were made with concrete blocks or rubble, pier pilings, car tires and ships.

Artificial reef construction and research became one aspect of the department’s new Nearshore Sport fish Habitat Enhancement Program in the 1980s. The program’s goals were to rehabilitate and enhance stocks of certain living marine resources, improve recreational fishing opportunities and evaluate the potential of using artificial reefs as mitigation/compensation for the loss of certain habitat and associated living resources. The California Legislature enacted Assembly Bill 706 (Fish and Game Code, Article 2, Section 6420-6425) in 1985, formalizing CDFW’s status as the lead agency in California’s reef building process. It authorized CDFW to construct additional reefs and administer reef studies with cooperation and assistance from the California university systems and other appropriate academic institutions and organizations.

CDFW, in all, built 32 artificial reefs in the state – 30 between Santa Barbara and the international border with Mexico – most between 1962 and the early 1990s.

Brian Owens, a senior environmental scientist with CDFW, said the program came to a halt in the 2000s due to a lack of funding.

Owens said CDFW does still get requests from parties interested in building artificial reefs and not just for sportfishing reasons.

CDFW is not developing any artificial reefs at the moment. The department is, however, looking to develop a statewide artificial reef maintenance plan.

“We do have interest in developing our statewide management plan,” Owens said.

The department is currently surveying people who use the reefs, hoping to build a picture of how and why artificial reefs are used by anglers and divers, how frequently these reefs are visited by each recreational user group and qualitatively describe the fishes and invertebrates living on the reef. Owens said the surveying will take place through March.

“It should give us a little better picture of whose using the reefs and why,” Owens said.

The survey is also intended to evaluate if the reefs are still in place and determine their conditions.

CDFW built reefs off the coasts of Marina del Rey, Redondo Beach, Santa Monica, Huntington Beach, Newport Beach, Oceanside, Carlsbad, Mission Beach, Pendleton and one near the international border with Mexico. Owens said of the bigger ones, including one near the Bolsa Chica Wetlands in Huntington Beach, appear on some fishing maps. Owens said the data gleaned from the survey will hopefully give a sense of if the artificial reefs were successful in growing the sportfish population.

“I think if you talk to fishermen they would say it’s successful,” Owens said.

The results from the survey CDFW is currently conducting will be used in developing a statewide artificial reef plan and will also help guide strategies for possible future reef developments in California.

Discussions not connected to CDFW have also sprung up about turning soon-to-be decommissioned oil and gas platforms into artificial reefs. There are 27 oil platforms along the Southern California coast nearing the end of their working lives, which are set to shut down. The decommissioning of the platforms has stirred up both supporters of turning oil rigs into reefs and opponents.

Time will tell what, if anything, is next for artificial reefs in California.