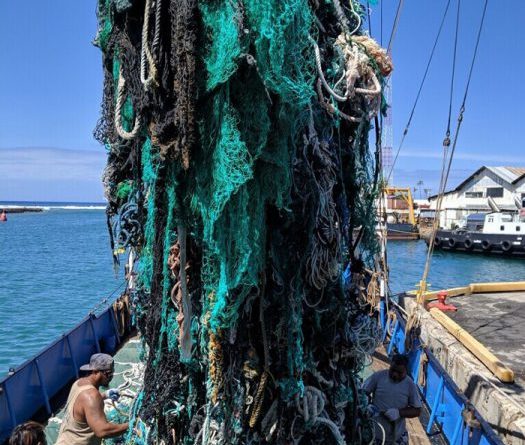 SAN DIEGO―Efforts to clean up the “plastic vortex”, a gyre of marine debris particles in the north central Pacific Ocean, will be the topic of a presentation at the Maritime Museum of San Diego on Nov. 22. Mary Crowley, the founder of Sausalito-based Ocean Voyages Institute (OVI), will be speaking on the non-profit organization’s efforts in that cleanup.

Those efforts include a 25-day mission this past June where more than 42 tons of fishing nets and consumer plastics were removed from the Pacific Gyre, which sits where four ocean currents meet between California and Hawaii.

OVI was founded in 1979 by a group of international sailors, educators, and conservationists with a mission of teaching maritime arts and sciences and preserving the world’s oceans. OVI launched a project in 2009 to focus on major ocean clean up and to raise awareness of the global problem of marine debris.

The Port of San Diego and the San Diego Port Tenants Association are partnering with the Maritime Museum of San Diego for the special event. Yacht designer Ron Holland will also join the discussion; he is an avid supporter and participant with Ocean Voyages Institute’s cleanup efforts. Holland will be sharing some experiences from his voyage this summer to the Arctic aboard ROSEHEARTY, a sailing yacht he designed.

Admission for the lecture is complimentary but a minimum $5 donation per person at the door is suggested. Visitors that purchase general admission tickets to the museum on Nov. 22 may attend free. The event takes place aboard the McKinney deck of the National Historic Landmark, the 1898 steam ferry Berkeley. Doors open at 5:30 p.m. and the lecture begins at 6:15 p.m. The event will end with a special book signing by Holland for his published memoir, “All The Oceans”. Published in 2018, it is a Foreword Reviews, 2018 INDIE Book of the Year Awards Winner taking silver in the travel category.