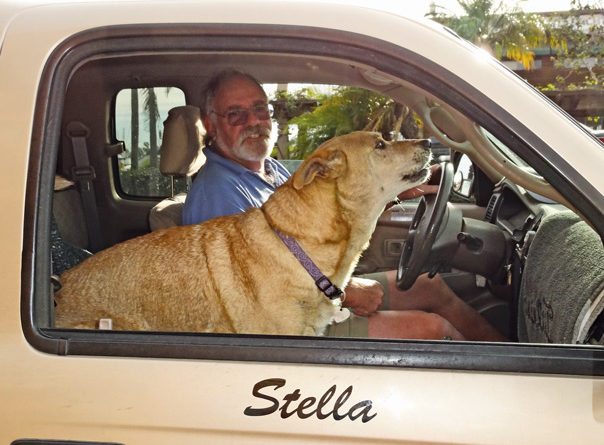 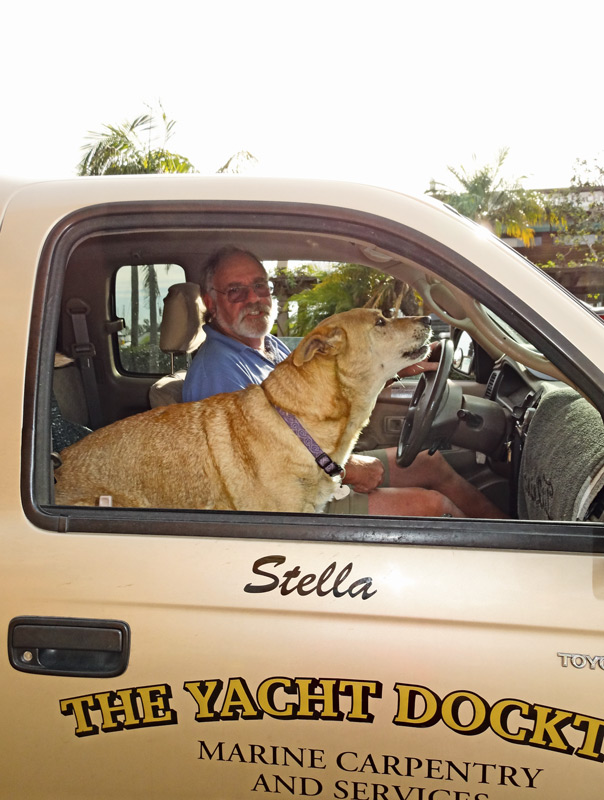 You may have seen — and heard — them rollicking along Shelter Island Drive, San Diego, marine carpenter Randy Spicer with his devoted companion Stella. Spicer drives his white pickup with his Yacht Docktor logo emblazoned on the side, while Stella, her head hanging over her name painted on the passenger’s door, serenades everyone with her distinctive howling before barking loudly.

“They hear her as we go by,” bringing smiles to her fans’ faces, he said.

You may have met Stella at January’s Sunroad Boat Show, where the badge-wearing dog drew potential customers into the Yacht Docktor’s booth, just as she does at her Shelter Island base. She’s turned Spicer’s shop into a mecca for the island’s dogs and dog-loving local kids and adults who stop by to see her.

Stella has been a well-beloved Shelter Island character since she and Spicer bonded at a pet adoption event in Balboa Park in September 2003. Spicer had planned to adopt a dog from the sponsoring rescue group. He looked at every dog unloaded from their van, but none seemed like “the one.” Then a final dog emerged just when he’d given up hope.

“She was filthy, grungy and badly matted, about a year and a half or 2 years old. She clearly had just had a litter, since her nipples were hanging to the ground,” Spicer recalled. But he connected with the sweet, well-mannered medium-sized golden dog with indeterminate breeding. The two have been inseparable since she moved into his Point Loma home, following her spay, and assumed her role as greeter and secretary for his marine woodworking business, even bringing in new business and closing sales.

Although she doesn’t bark much, she is known for her distinctive vocalization, each howl and bark different when riding in the truck, chasing skateboarders or playing with other dogs.

Their mornings start with a neighborhood walk.

“She picks the way we go. She has about half a dozen routes she chooses from,” he said. They used to go for Sunday romps at Dog Beach in Ocean Beach until she tore ligaments in two knees, now healed, but the injuries slowed her down and left her arthritic. “She hasn’t said, ‘Let’s go to the beach.’ She’s a creature of habit,” Spicer explained.

Stella, now 13, spends her days outside Spicer’s Shelter Island Drive shop, sitting on her bed under her name board or in her truck’s shadow, waiting to greet clients or passersby. She makes her rounds of neighboring offices along the street, checking to see what’s happening, who needs canine affection and who might spare a treat for a friendly dog.

“She’s a real treat hound,” heading straight to the source of treats, Spicer explained, whether it’s the Marine Exchange’s upstairs offices or the nearby Pacific Western Bank’s tellers. Polite, well-trained Stella never helps herself, just “window shops” until getting permission to accept a treat.

After suffering a glancing blow from a car while chasing a skateboarder, Stella learned to stay off busy Shelter Island streets unless accompanying Spicer on business calls or client visits. She always goes along to marinas but never boards clients’ boats. As long as she knows which boat he’s aboard, she’ll wait patiently nearby in a shady spot on the dock.

Friendly Stella, Spicer observed, is “faithful and true, the perfect example of what a rescue dog can become.”

“She’s such a character, a staple of the island. Stella’s a jewel, the jewel of Shelter Island,” Kelley-Foy said.