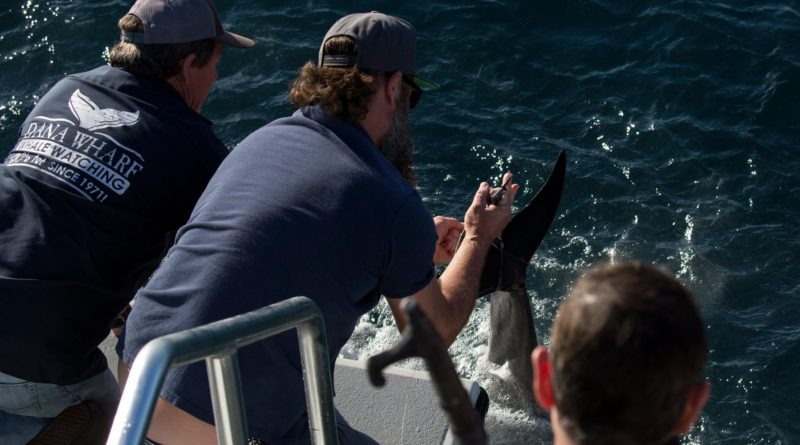 DANA POINT — Whale watching adventures often lead to the sighting of other creatures such as sea lions and dolphins, but one cruise from Dana Point Harbor lead whale watchers to see a truly spectacular, and nail-biting, event.

On Jan. 13, passengers aboard an excursion out of Dana Wharf Sportfishing and Whale Watching witnessed a heroic effort that saved a common dolphin’s life.

Capt. Frank Brennan became aware of a distraught dolphin while looking through his binoculars on the whale-watching vessel. Brennan thought this was very odd.

“I saw the dolphin’s nose poking up out of the ocean,” Brennan said. “Seeing one dolphin is extremely rare. Usually they travel in pods of 100 to 3,000.”

As the boat approached the dolphin, Brennan noticed it was having difficulty swimming due to a string or line of some kind that had become ensnared around its tail.

“The dolphin was carrying about 10 feet of rope with a really big knot at the end,” Brennan, who believes the string could have come from a kite that blew into the water, said.

Acting quickly, Brandon Endo, the vessel’s deckhand, cut the lines away allowing the dolphin to swim to safety. At this time, Brennan and Endo also realized the dolphin had been cut very badly from the line; they knew if they didn’t intervene this dolphin would not have lived much longer.

“The dolphin cooperated with us,” Brennan said. “It was almost like he knew we were going to help him.”

Brennan continued, “He could have been shark food.” Mako sharks dwell in those waters off the coast of Dana Point and it’s not uncommon for them to eat dolphins that drift away from their pod.

Once the dolphin was freed, he stopped to breath and then began swimming away.

Passengers of the whale-watching boat were standing by and took photos and video of the rescue.

Brennan is no stranger from helping marine life. In the past, he has been active with the Orange County branch of NOAA’s Disentanglement Team, having helped a Pacific gray whale that was caught in a lobster trap around 15 years ago but never a dolphin.

“I’ve touched a dolphin at SeaWorld, but I’ve never touched a wild dolphin before,” Brennan told The Log.

Donna Kalez, general manager at Dana Wharf Sportfishing and Whale Watching, said beach visitors need to be careful about leaving their trash behind and this event is an example of what could potentially happen to marine life that encounter human discards.

“Please be careful what you throw in the water,” she said. “It may harm sea life!”