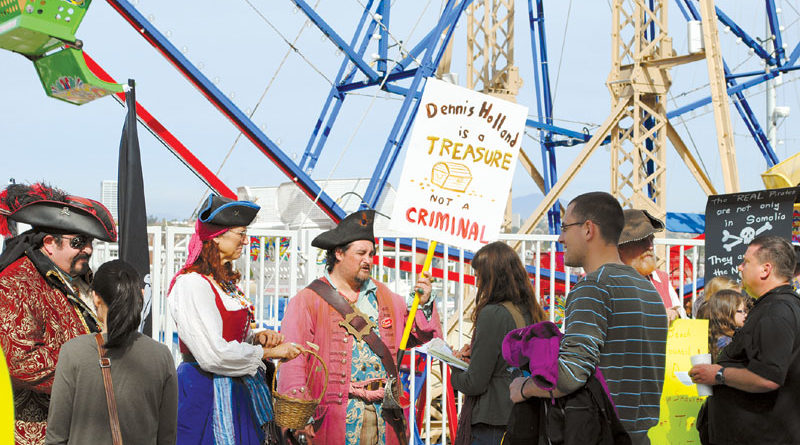 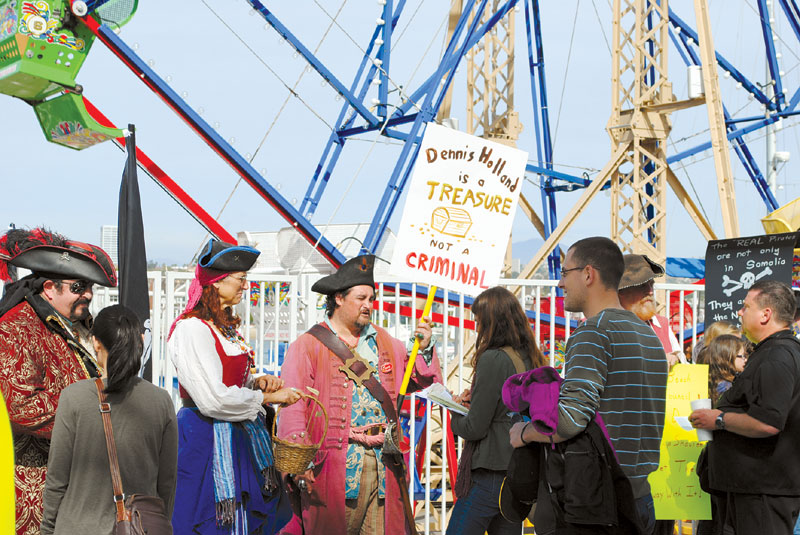 NEWPORT BEACH — While no grog or pillaging appeared to be on the docket, a group of “pirates” in full garb appeared March 24 in front of Balboa Peninsula’s Ferris wheel, singing songs and holding signs to rally support for Newport Beach resident Dennis Holland’s backyard boat restoration project.

Adorned in pirate hats and coats, with some carrying guitars and even pet rats, the group assembled in Balboa from throughout Southern California, rallying from 3 p.m. until sunset.

The group chanted “Save the Shawnee,” and passersby gathered to read their protest signs — including “Dennis Holland is a treasure, not a criminal” and “The Newport Beach City Council wants to destroy the tall ship Shawnee — Don’t let them get away with it.”

The rally is just the latest turn in an ongoing battle between shipwright Holland and the city of Newport Beach — with Holland fighting to carry on rebuilding a historic vessel he has been working on since 2006 and the city working to remove what some residents have called “neighborhood blight.”

Holland came to pirate rally, making the crossing on the Balboa Ferry to see the support for his project firsthand.

“It just gave me a lot of encouragement to see that,” Holland said. “This project is what I believe in, because it’s right. It’s good to see people helping you along the way.”

The vessel, a 72-foot 1916-built wooden ketch, named Shawnee, has drawn the ire of Holland’s neighbors over the course of the the years-long restoration project. The city, which initially permitted the vessel to be built in Holland’s side yard, enacted a citywide ordinance prohibiting long-term projects in residential areas in 2009 — an ordinance Holland believes was aimed directly at him.

The latest turn led to the issuance of a preliminary injunction by Orange County Superior Court Judge Gregory Munoz March 1. It gives Holland until April 30 to remove the wooden boat from his property, or face daily fines of up to $1,000 per day and possible jail time.

Rally organizer Christine Lampe, who goes by “Jamaica Rose” during pirate events, is editor of No Quarter Given — a magazine and clearinghouse for information on tall ships on the West Coast.

“I think it really gave him a shot in the arm to see the support,” Lampe said. “And, hopefully, it helped him be not so depressed about dealing with city hall.”

Following the March 1 court ruling, Newport Beach deputy city attorney Kyle Rowen said the city hopes Holland will comply with the court’s order and move the boat to a suitable location that is consistent with applicable laws — meaning a boatyard or storage facility outside of a residentially zoned area.

Holland contends that moving the boat in its current state will seal its fate, as the keel has been separated from parts of the hull as Holland works to restore replace rotted planks and rusted bolts.

“I would need a custom cradle and lift to move it safely right now, and I don’t have the funds for that,” Holland said.

At his current work pace, Holland said Shawnee wouldn’t be safe to move from his side yard for another three years.

“Them asking him to move the ship when it’s the most disassembled and in its most fragile condition is really a threat to the ship,” Lampe said. “The city council gave him permission to do this project and now — midstream — they’re telling him to abandon the boat. It seems he should have been grandfathered in.”

The pirate supporters, many of whom frequent tall ship festivals, said the significance of tall ships like Holland’s Spirit of Dana Point — a 118-foot brig Holland built at his former Costa Mesa home in the 1980s — are what keep maritime history alive for those interested today.

Allan Malloy, also known as “Capt. Sebastian,” sees the city’s action as a hindrance to a historically significant project.

“I’m sick and tired of politicians telling people what they can and can’t do on their private property,” Malloy said. “There is a lot of history with this boat, and it shouldn’t be forgotten.”