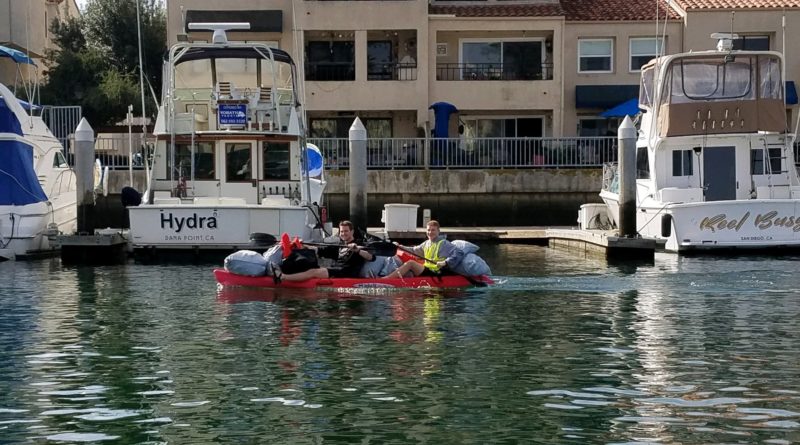 On the first Sunday of every month, Surfrider organizes volunteers and Huntington Harbour Boat Rentals donates small crafts so volunteers can collect trash from the waterways.

HUNTINGTON BEACH—Huntington Harbour is a picturesque view, a neighborhood of winding water trails dotted with boats and kayaks. Intruding on this picture is often plastic water bottles, food wrappers, polystyrene foam and even discarded shoes and clothing. Volunteers for years have been dedicated to painting a cleaner picture of the harbor, all while having some fun.

For the past six or seven years on the first Sunday of each month, volunteers have collected outside Huntington Harbour Boat Rentals around 8:30 a.m. ready to paddle the waters surveying for floating wrappers and Styrofoam bits and trek the muddy shoreline collecting bottle caps and discarded chip bags.

Huntington Harbour Boat Rentals donates about 30 kayaks, stand up paddle boards (SUPs) and Duffy boats to volunteers for the harbor cleanup, which is organized by the Huntington/Seal Beach Surfrider Foundation.

“You have people that are doing this stuff that the city should recognize,” Larkin said.

Huntington Harbour Boat Rentals and Huntington/Seal Beach Surfrider Foundation were recognized with the award at the March 2 City Council meeting.

“I think it’s fantastic that you get our high school students involved in this effort and all the other volunteers because part of the Making a Difference Award is inspiring others to do more good works,” Semeta said while delivering the award.

Semeta created the award to recognize selflessness, volunteerism and exceptional community service in Huntington Beach. This was the second time the award has been handed out.

Huntington/Seal Beach Surfrider Chair of the Harbor Program Shane Coons said interest from individuals and groups, such as high schools, wanting to volunteer in the harbor cleanups has grown over the years. Coons said they started with about just a dozen volunteers and now they have about 40 and a waitlist. He said he is encouraged by the number of young people interested in volunteering.

“Now we have to do reservations six months in advance,” Coons said. “We have more people that want to participate than we have kayaks.”

Coons got involved with Surfrider and beach cleanups after noticing the problem first hand while out on water surfing.

“Generally there seems like there’s a never ending supply of polystyrene,” Coons said.

About six/seven years ago Coons said the Huntington Beach chapter started having discussions about adding a cleanup further up the watershed in the harbor, in the same way Newport Beach was doing.

Now, it is a monthly occurrence, taking place on the first Sunday of the month. Volunteers with the harbor cleanup spend about two-and-half to three hours collecting trash from kayaks and paddle boards as well as along the harbor shoreline. Coons said on average, every person collects about 6.6 pounds of debris. The Surfrider beach cleanups around Huntington/Seal Beach are held every Saturday, with volunteers spending about four hours collecting trash. Coons said on average each person at those cleanups collects about one pound of trash.

Coons said the goal is to do something good for the environment and hopefully impact people’s decision making process.

“I think it’s a good example of the problem in general,” Coons said. “It shows people maybe they don’t need to get a plastic bag for their bag of oranges at the store.”

Coons, who, when not surfing or volunteering with Surfrider, works as an attorney, said his years of volunteering in the cleanups has led to a shift in his own life. In 2018, with three other Surfrider volunteers, Coons started 4 Blue Waves – a distributor of food and beverage packaging made of only reusable, recyclable, compostable, and biodegradable products.

“Trying to create a market for turning this waste into a commodity,” Coons said.

For example, he said their coffee cups could be made into a shoe box or a clothing tag. Zach’s HB and Secret Spot Café have used their products, according to Coons. He also said 4 Blue Waves is launching a new ocean degradable straw this year and hoping to expand to more restaurants. He said the company’s ultimate goal is to close the loop to make sure restaurant products don’t end up in a landfill or in coastal waters.

“It’s been rewarding to share the message,” Coons said.