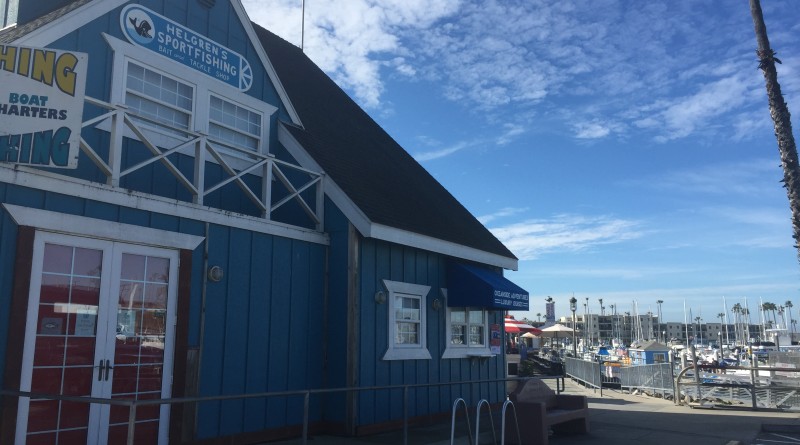 UPDATE, April 20, 9:30 a.m.: Helgren’s Oceanside Sportsfishing will remain at its landing location at least for now. Oceanside City Council unanimously approved Helgren’s lease extension at its April 19 meeting. The lease has been extended through November, as confirmed by Oceanside City Manager Michelle Lawrence. Complete coverage of the lease extension – and what it means for the planned Oceanside SEA Center – will be published in The Log‘s May 5 issue.

OCEANSIDE ― The future of a landing at Oceanside Harbor remains uncertain with a vendor lease expiring on May 5. As the expiration date for Helgren’s lease approaches, the anticipation grows in regards to what will happen next at the landing in Oceanside.

Helgren’s Sportfishing, who has been leasing the landing space from the city for the past 39 years, is in jeopardy of losing the property to another vender after Oceanside City Hall issued a Request for Proposals (RFP) last year, giving another vendor an opportunity to redevelop the area with a community center.

Despite the upcoming lease expiration, Helgren’s team disputes the city’s handling of the RFP process. Resolution of who will be allowed to operate at the landing moving forward is likely to be decided at the April 19 Oceanside City Council meeting.

“What we proposed is…very unique. It’s very timely. We are combining sportfishing, science and education all under one roof. It meets the current market need,” Cacciola stated.

The RFP from OSC was approved in August 2016 and negotiations on a lease began.

With a second meeting scheduled for further lease discussions, OSC suddenly received notification about a “glitch” in the process. There was no further explanation given at the time.

“We actually started our first negotiation meeting on Sept. 7. Then we were scheduling a meeting for the following week, a second exclusive negotiating meeting,” Cacciola told The Log. “It was on Sept. 8 that we got that email from city property management telling us there was a glitch in the process.

“We found out through the press and other sources that the city was back negotiating with Helgren’s. At that time, we weren’t really told why they were doing that.” Cacciola continued.

The Log asked Joseph Helgren if he disputed the decision on the RFP.

“Yes, we did [dispute the decision],” Helgren confirmed. “When they put the RFP out, they needed to notify us in writing certified, and they were supposed to give us 60 days exclusive negotiations between the city and us. If we couldn’t come to an agreement, then after that they had the right to put it out to a third party.”

Despite this, Helgren participated in the entire RFP process.

“Helgren’s attorney, Michael Duff, was quoted in a couple news articles saying that Helgren’s objected to the process and to the selection. Now mind you, this was after that fact that we were selected. It wasn’t before. It was after they lost that they objected.” Cacciola pointed out. “That is one of our major concerns that they actually accepted the whole process of the RFP, participated in it, had no objections then and had no objections to the interview that was required. The only thing that they objected to is the outcome.”

The Log reached out to the City Manager inquiring why the Small Craft Harbor District Board of Directors, which also serves as the City Council, did not approve city staff’s selection of Oceanside SEA Center and has now been trying to accommodate both parties.

“The selection of the Oceanside Sea Center was accomplished at a staff level, subject to Harbor Board approval. When the matter was presented to the Harbor Board for consideration, Helgren’s had made it clear that it wished to remain in business in the Harbor. I cannot speak to the reasons underlying each Harbor Board member’s decision to direct staff to attempt to accommodate both Helgren’s and Oceanside Sea Center. However, staff has communicated extensively with both parties since that direction was given in September and has considered multiple options to accommodate both operations,” Oceanside City Manager Michelle Lawrence replied in an email to The Log.

Cacciola did say city staff has been trying to reach some sort of concession.

“City staff has been directed to reach some kind compromise to accommodate both the SEA Center and Helgren’s someplace in the harbor,” Cacciola said. “It doesn’t necessarily mean that we both have to occupy the same space, but there is a limited amount of dock space that a tenant can accommodate large passenger boats within Oceanside Harbor.”

Both parties (Helgren’s and OSC) as well as the harbor manager confirmed there have been a lot of back and forth correspondences.

“City staff and the City Attorney’s Office have been negotiating with Helgren’s and with Oceanside SEA Center and their attorneys since receiving direction from the Harbor Board in September to attempt to accommodate both parties in the harbor,” Oceanside Harbor Manager Paul C. Lawrence stated. “There have been several proposals and counter-proposals exchanged over that time period, with the understanding that final approval of terms on behalf of the Harbor District lies with the Harbor Board. Staff is preparing to bring options forward to the Harbor Board for consideration prior to the expiration of Helgren’s current lease.”

“They could give Helgren’s a lease extension until a certain period of time. They could award us exclusively a lease for the building and the dock. They could award Helgren’s some kind of lease accommodation within the harbor, and they offer our lease,” Cacciola stated. “We don’t know exactly what’s scheduled for April 19. What we do know is some action is going to be needed to be taken.

“We firmly believe that they should be voting on the terms of our lease for the building and the dock. Now if they take some other action on Helgren’s end, so be it, but we expect them to consider our lease terms, and we are very much optimistic that they will approve it,” Cacciola continued.

Helgren is hoping for an extension on his current lease of the landing with the city.

“It’s been a long year and half. I’m hoping our extension will go through,” Helgren said.

Why the city staff approved OSC’s RFP and the Harbor Board did not remains unclear. Both Paul Lawrence and Cacciola pointed out Oceanside City Council also serves as the Oceanside Small Craft Harbor Board.

“Here we have a leaseholder that’s been stuck for years in a protected monopoly, and this is the first time that they have had to compete. They lost. They’re protesting.” Cacciola stated.

Joseph Helgren confirmed there has been an exclusivity clause in the lease agreement all these years.

“Some people think it’s a monopoly, but it’s really not,” Helgren told The Log.

The reason ports have an exclusivity agreement is to keep some of the liability off of the city, according to Helgren. He pointed out it has been like that since his parents got awarded the contract in 1978.

City Manager Michelle Lawrence confirmed the matter of Helgren’s current lease will be on the consent calendar at the April 19 meeting in Oceanside.