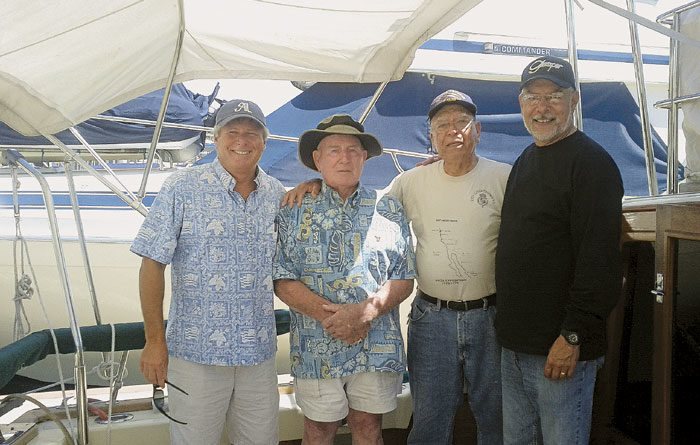 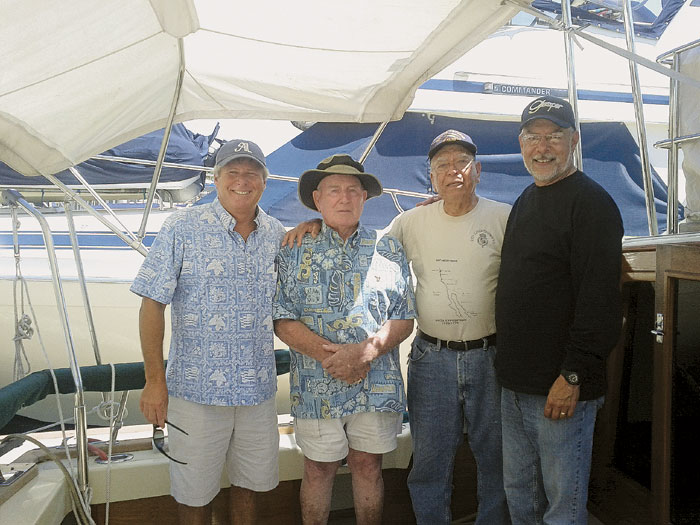 LONG BEACH — Patrick Walsh was a celebrity of sorts one weekend this summer, when two “fans” of his craftsmanship and ability to build and maintain a classic Glasspar boat met one afternoon on the boat.

Humble and not one to talk up his talents, Walsh offered a smile and quiet chuckle when asked how it felt to be praised for his work.

“They loved it,” said Walsh who is selling the boat. “They went nuts.”

Robb Webb, a yacht broker with Flying Cloud Yachts in Long Beach — who is selling the boat for Walsh — set up the meeting between Walsh, Eddie Grijalva, who worked for Glasspar from 1952 to 1962, and George Bell, a member of the Glasspar Owners Association. They all wanted to meet the man who built his own 2003 Custom Glasspar 32 Sport Sedan, more than three decades after Glasspar stopped producing boats.

Founded in the 1950s by Bill Tritt, Glasspar was one of the first companies to build boats out of fiberglass instead of wood or metal — building boats in the 8- to 21-foot range. At the time, lightweight, rot-proof fiberglass was considered a “miracle” material.

“It was one of the first fiberglass boats at that time, in the 1950s,” Grijalva said. “It was well made, and its construction really set it apart from others.”

Grijlva worked in several departments in the Glasspar company, moving up from the sanding department to painting, applying gelcoat, molding and working on the assembly line —  before being promoted to the research and development department, where he helped construct the mold for Glasspar’s largest craft: a 30-foot boat.

Walsh built his own 32-foot Glasspar Sport Sedan in his packaging warehouse in Garden Grove, after purchasing the boat molds in the 1980s.

Walsh’s grew up in England and Ireland. His entry into boating began when he joined the British military at age 18. He operated PT boats for three years.

He moved to California in 1957 and formed an international packaging company. He created cradles for ships and large items to be transported, such as missiles and planes, in his Garden Grove warehouse.

The entrepreneur decided to enter the world of boat production after seeing the Glasspar 30 boat hull molds offered at an auction in Costa Mesa. He lost it to a higher bidder.

However, fate stepped in, and Walsh was able to purchase the molds about five months later, from a man in Big Bear.

Walsh, who had previously worked on a 30-foot trimaran and a 30-foot Yankee sailboat, purchased the tooling for the Glasspar 30 with an intent to build and sell new boats. He and a partner built two boats. One of them was Celtic Dreamer, which took approximately 15 years to construct.

With the help of employees at the packing company, Walsh rebuilt the vessel’s engines at Golden West College in Huntington Beach, as part of a diesel mechanics class.

After years of construction, Celtic Dreamer was launched in 2003 at Long Beach Shipyard. When finished, the boat was a comfortable cruiser capable of running at 26 knots. Walsh took the boat on several trips to Catalina.

He ultimately decided to sell the tooling to Stacy Duke Akana, who then took the molds to Hawaii, Walsh said.

News that a “brand-new” Glasspar existed spread quickly. That news brought Grijalva, who helped construct the original molds in the Costa Mesa Glasspar factory, out to Long Beach. The 80-year-old Vallejo resident sat with Bell and Walsh on Celtic Dreamer and reminisced about his time at Glasspar.

Grijalva remembered testing Glasspar boats in Upper Newport Bay and said many celebrities were taken with the boats’ classic lines and high-quality construction. Actors John Wayne, Steve McQueen and Eddie “Rochester” Anderson from “The Jack Benny Show” all could all be seen wandering the production room floors from time to time.

“It was pretty thrilling,” he said.

Walsh said once he sells the boat, he will definitely miss it. However, he said, it is time for him to let go.

“The buyer of this boat will appreciate the classic lines and the quality construction of Glasspar,” Webb said.

“He has done a beautiful job on that boat,” Grijalva said.