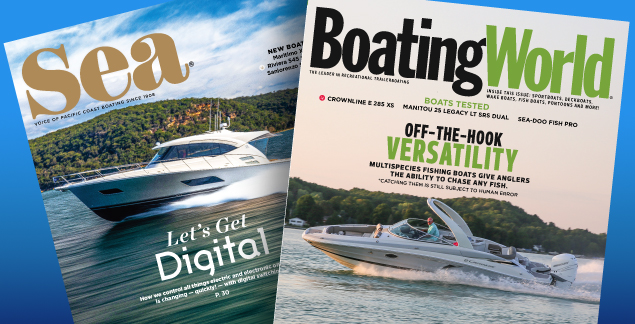 Two long-standing marine publications will no longer be under Duncan McIntosh Co. umbrella – so, what’s next?

FOUNTAIN VALLEY—Let me first start off by writing the words you are about to read weren’t easy to string together. I came into the publishing business almost 14 years ago, fully aware the industry was changing – and not necessarily for the better. Being a news reporter consistently made the list of worst careers to pursue. Print media has been hemorrhaging jobs and revenues for several years now. It’s becoming increasingly difficult for journalists to hold on to a steady job.

I write this op-ed piece as one of the lucky few – a survivor, if you will. Anyone who has read The Log since September 2014 has certainly come across my byline. I’ve spent about one-third of my journalism career as a reporter and editor of The Log. Until two weeks ago I had the honor and privilege of working alongside several “sister” publications – two of those being Boating World and Sea Magazine.

Both of those publications, sadly, are heading out the door, to be published (possibly) by another company in the (hopefully) not-too-distant future. The Log is now the only publication under the Duncan McIntosh Co. banner. Lindsey Glasgow, The Log’s writer and reporter, and I are the only journalists left standing at our company.

Here’s an assurance: Lindsey and I will continue to be the dogged journalists that we are, continuing to report the news and stories you care about the most. Journalism might be dying but it is not dead. The Log is still dedicated to accurately reporting the facts, keeping the powers that be as honest as possible and sharing stories of the people who make the boating industry so special.

Southern California is a boating haven. I admittedly came to The Log in the summer of 2014 with absolutely no idea of what I was getting myself into – I didn’t own a boat or have boating experience, I only went on one fishing trip (a school trip to Catalina in 1987) and I never held a job in Orange County. So covering recreational boating and fishing was completely foreign to me. The learning curve was steep, to be sure – but I learned so much, both about myself and about the worlds of boating and fishing. Fast-forward more than five years and I fully embrace the Southern California boating scene. Every interaction I’ve had with our readers has been special. The stories are always heart-warming, the feedback always candid and the friendships forged, always sincere.

Aiding my learning curve and growth as a maritime writer: having the team who put Boating World and Sea Magazine together every month sit a few feet away from my cubicle – first located in Irvine, and, then, Fountain Valley. As of two weeks ago, Southern California’s maritime journalism space feels … empty. The words I’m writing here, accordingly, are so hard to utter.

The Log is now the go-to publication for Southern California boating (with a dash of sailing and sprinkle of fishing). Losing Sea Magazine and Boating World, however, is no small matter. I’m obviously hopefully another publisher will come along and pick up the pieces like nothing ever happened. The maritime industry can’t afford to lose any publications, especially ones as reputable and long-standing as Boating World and Sea Magazine.

Sea Magazine, for example, has been around for about 111 years and has been the voice of boating trends in the Western United States. The publication provided equipment reports and product news. Boating World, meanwhile, catered toward the lifestyle of boating, covering activities such as cruising, fishing and waterskiing.

Both publications combined for 21 print publications each year. The future of those publications, as we are less than 20 days away from a new decade, remains in flux as we put out this latest issue of The Log. The only thing we can assure you, our readers, is we will use this as an opportunity to expand our coverage. The Log is not an orphan despite losing its immediate family. We are still here, ready to take on a higher calling and deliver our readers the best journalism possible.

Yes, the media business is hurting. We’re not happy about being the last publication standing under our banner. But we still have the resources to continue reporting on the maritime world. The loss of Boating World and Sea Magazine isn’t the end of the road – it’s merely one door closing and another one opening. We hope you’ll continue to trust and support The Log as we step up our game and fill a larger space with quality reporting and meaningful storytelling.