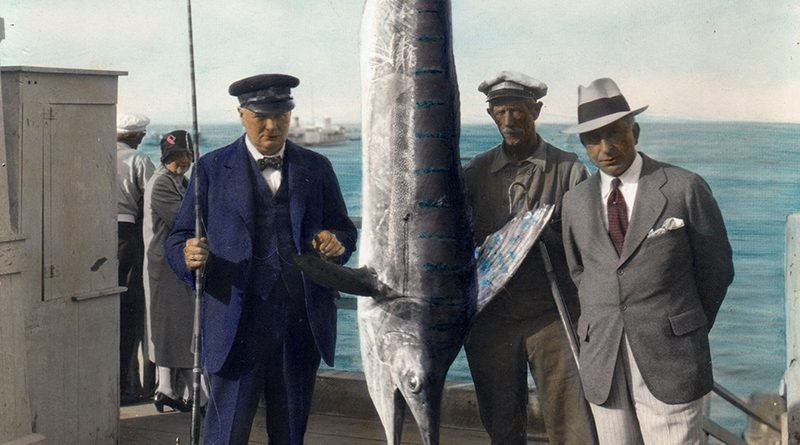 Winston Churchill visited Catalina Island in September of 1929, just after his tenure as the Chancellor of the Exchequer, and left with a notable and bizarre accomplishment.

Within one hour of leaving the dock on the U.R. No. 2, Churchill brought in a 188-pound marlin.

“They had not been out long before the distinguished British statesman hooked the marlin,” said a Sept. 9, 1929, article from Los Angeles Times.  “It took twenty minutes to bring the big fish to gaff. It was gaffed by Capt. Monte Foster and the party retired immediately. Directions were given to ship the fish to the Biltmore in this city, where the Churchill party is stopping, and it was said that this probably means a big fish dinner at the hotel tonight.”

After his position had reached its term-limit and the conservative government had been swept out of government, Churchill embarked on a lecture tour of North America accompanied by his brother John S. Churchill, nephew John S. Churchill, and his son William Randolph Churchill, according to the Los Angeles Times article. This trip was Churchill’s only visit to the West Coast of the United States.

Churchill spent his time in California with William Randolph Hearst, an American and publishing tycoon also responsible for Hearst Castle, who lavished him with entertainment, according to the Churchill and the Great Republic website.

At some point, Churchill was invited out to Catalina Island where he abandoned his group, who wanted to see the submarine gardens on glass-bottom boats and took to the sea from Lee Phillip’s fishing launch where he pulled in the large catch.

A public servant of a foreign nation and a rather talented or at least very lucky angler.