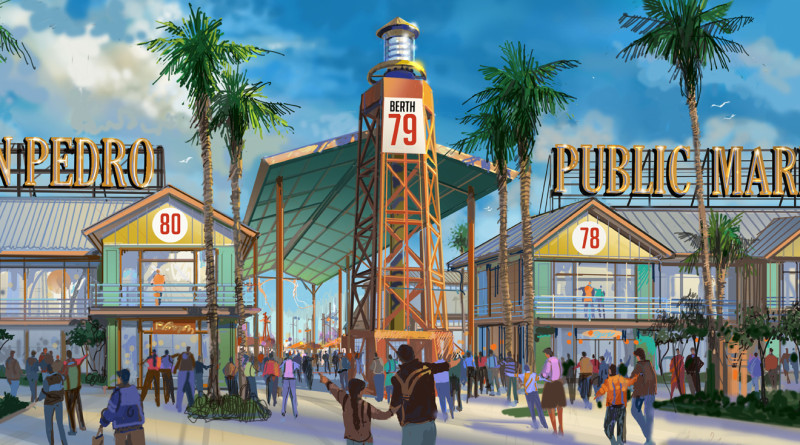 SAN PEDRO— For anyone who has seen “The Unbreakable Kimmy Schmidt,” Carol Kane’s rambunctious Lillian Kaushtupper stands for many lifelong residents who live in colorful parts of town, complete with graffiti, pollution and decrepit housing, but adamantly oppose any alterations that could change his or her beloved hometown, faults and all, to a comical extent. Plans to demolish Ports O’ Call Village, a beloved local hangout, in order to build the new, stylish and gentrified San Pedro Public Market have seen an emotional outburst from members of the community as well as the Port of Los Angeles Harbor Commission.

Construction on the planned San Pedro Public Market, which is expected to replace Ports O’ Call Village, will soon be under construction. The city of Los Angeles plans to spend $100 million on building a Fisherman Wharf-style waterfront marketplace in the shadows of the Vincent Thomas Bridge by 2020.

Eugene Seroka, Executive Director, was the first speaker to introduce the presentation. Seroka regarded the situation that had developed with the current tenants at Ports O’ Call as painful and stated this presentation was an effort to “set the record straight,” as the Harbor Commission had been criticized several times for not being transparent.

All tenants in the area have held month-to-month leases since 2014. While the tenants were disappointed and felt the lack of transparency was unfair, the renovations were mostly desired by the locals and once the process was put in motion it was only a matter of time before construction threatened businesses.

To clarify the plan and acknowledge at least 12 meetings had been held over the years to encourage transparent involvement from the community, Michael Galvin, Director of Waterfront and Commercial Real Estate, gave a PowerPoint presentation outlining the next steps in a detailed, but at times hard-to-follow, presentation.

Among the decision that most devastated locals was the decision not to incorporate the popular Ports O’ Call waterfront restaurant in the current renovation plans. Several members of the community expressed their sorrow regarding the selection process of which tenants will stay and which will go.

While Port of Los Angeles has collectively offered to work with tenants who will be displaced, many have not taken up the agency’s offer. Christian Guzman, president of Central San Pedro Neighborhood Council, spoke out that some tenants felt as though “they had been left behind.”

In the original contract, known as Lease 951, signed on May 19, 2016, there were terms of the contract that locals found troubling, especially language that the waterfront area would need to be completely demolished in order to build the new San Pedro Public Market. While locals and tenants worked together with Central San Pedro Neighborhood Council to submit a resolution, by the end of the meeting Commissioner David Arian stated that he had been working on contract negotiations his whole life and at this point in time, Port of Los Angeles Harbor Commission would uphold the terms of the contract as developers constructed the new waterfront marketplace.

San Pedro Public Market, a new development that will be headed by The Ratkovich Company and Jerico Development, will enter the demolition stages starting as soon as March. Plans for construction can be seen on Jerico Development’s website, inviting the general public for commentary.

Waterfront property, which is highly prized and valued in California, has seen more and more cities making the decision to renovate. In addition to San Pedro, San Diego and Chula Vista areas have already seen plans for projects begin. Redondo Beach is currently entangled in a costly lawsuit as a result of locals rejecting new waterfront developments by a local developer.

For the residents of San Pedro, Ports O’ Call restaurant offered a community gathering place, a kind of sanctuary where some locals even said they spent Thanksgiving. Even among the Harbor Commission, there were discussions of how family events, baby showers and other notable hallmark moments were spent there. In many ways, it is difficult to know the physical embodiments of our memories will no longer stand – that reliable restaurant might not be there anymore or it will change and be replaced by something else that doesn’t have the same historical significance.

Some residents were confused by how the “selection process” of which business would stay and which businesses would go was unclear with a handful even making accusations of nepotism.

San Pedro has had an incredible history and arguably makes up one of the grittiest, most diverse destinations on California’s coast from The Hidden City to a large handmade art exposition center called Crafted and the other matter that Port of Los Angeles has broken records with the number of containers moved in 2017. It’s an eclectic port city with photographs to prove Victorian women walked the beaches at the turn of the century in full, long-sleeved garments popular at the time.

In response to the public comments, Arian heatedly referred to the “crown jewel” of San Pedro as the industrial business that has allowed for the city to see these renovations. Arian stated, “[These are] dollars made by longshoremen moving those containers, not taxpayers.”

Many of the other commissioners seemed to unanimously agree that while there is a sadness tinged with job loss and change, there is also new opportunity coming to San Pedro, which might include better jobs for future generations so they do not have to search elsewhere.

Commissioner Anthony Pirozzi Jr. stated, “Our future is in our hands. And like it had done for my family, it has started on the waterfront.”

Each of California’s beach and port cities has a special identity and is represented by the people who have lived there, sometimes for generations. However, as our communities change, we still have the power to make our voices heard and to be pillars in the community.

Though oftentimes change is known to bring the things we desire – more jobs, renewed housing, better schools, a town that will see generations to come settle there – such change can also go against the very fiber of being various communities and neighborhoods stand against, such as possible increased housing or business rentals, taking away the character from a waterfront town.

In terms of San Pedro, the contract has been signed and the troubling sacrifice of possibly putting some tenants out of business has been made for the hopeful return the greater good could offer.

While Ports O’ Call Village will be completely demolished, this will be the start of laying groundwork for San Pedro Public Market of which current plans are modeled after Fishermen’s Wharf of San Francisco fame. No word has been stated on whether more public mooring will be available to boaters, but San Pedro Public Market may become an impressive tourist destination.

San Pedro Fish Market will continue to operate during the construction as well as a few other select businesses, which have been incorporated into the design. Developers hope to complete construction on San Pedro Public Market by 2020.