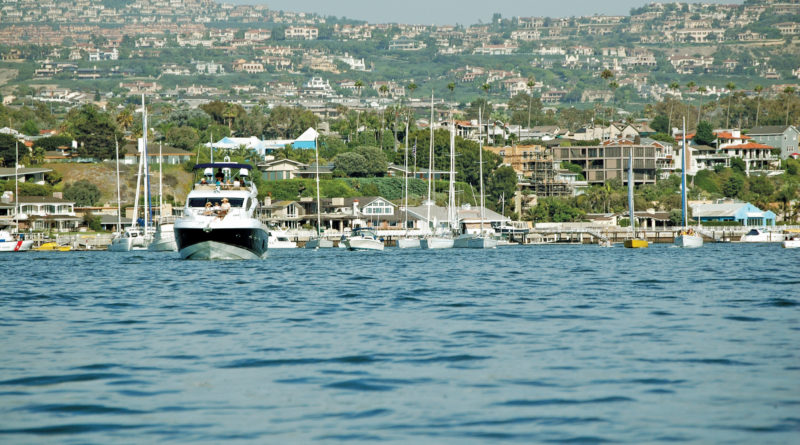 Kurt Bortsing, who previously worked for the Marine Bureau of Long Beach, is tasked with implementing city’s vision for new harbor department.

NEWPORT BEACH — The city of Newport Beach, as it enters 2019, has a new harbormaster. Kurt Borsting, who previously worked in Long Beach, has taken the reins from Dennis Durgan, who had served as the first harbormaster since July 2017.

Borsting started his new position on Monday, Dec. 10 and was given an introduction at the harbor commission meeting the following Wednesday. Borsting, who spoke at the meeting, said he had grown up in Long Beach and had also raised his family there. His most recent job was as the marine operations superintendent for Marine Bureau of Long Beach where he managed three municipal marinas.

City staff worked with Bob Murray & Associates, a Sacramento-area recruiting agency, to fill the harbormaster position. The annual salary for the harbormaster falls between $98,016 and $147,000, according to the job listing for the position. There were other perks for the position including a $400 a month automobile allowance, a monthly smartphone, administrative leave for up to 80 hours per calendar year with permission from the city manager, a $50,000 life insurance policy paid for by the city and a monthly $1,725 cafeteria plan with medical, dental and vision insurance coverage.

The job listing stated: “This newly created position will serve as Executive Director of the Harbor Department reporting directly to the City Manager and serving as a member of the management team. The harbormaster plans, organizes, directs and coordinates harbor related programs and services, including city harbor patrol and code enforcement, moorings administration and management, Marina Park slip rentals, and harbor safety and maintenance activities. He/she will provide responsible administrative staff and assistance to the city manager and Newport Beach Harbor Commission and coordinate with other city departments, including police and fire, and the Orange County Sheriff Department’s Harbor Patrol division, on emergency response and harbor safety and security matters.”

In a description of the ideal candidate, strong leadership skills, a proven track record and transparent communication with the general public, and excellent oral and written communication skills were noted to succeed in this position.

The listing further stated: “The ideal candidate will be a flexible, level-headed individual who is approachable and capable of developing and maintaining a good rapport with staff, community members, and the general public,” emphasizing the newly developed harbor department’s focus on good service.

Durgan had also applied for the permanent position, along with 42 other candidates, but was edged out by Borsting’s experience in a similar position.

Harbor Commission member Paul Blank told The Log in an email he had been part of the interview process to hire the new harbormaster. Blank said in July 2018, after the harbor department was formalized, the city’s human resources department and recruiting agency began a nationwide search to find candidates.

Blank stated: “Five finalist candidates were interviewed in late October. I was one of three community members invited to sit in on interviews. From those broad interviews more detailed ones took place in early November with Grace Leung (city manager) and Carol [Jacobs, assistant city manager] for the top two candidates.”

After detailed background checks and the negotiation period, Borsting emerged as the best fit for the position.

Blank continued: “He [Borsting] was an excellent candidate and I believe he will be an excellent harbormaster.”

Though Durgan had been part of the application process, he was not selected due to not meeting the minimum experience in managing a harbor. Durgan resigned in October, but offered up his expertise during the transition. However, current harbor commissioners still had glowing things to say concerning Durgan’s year as a temporary harbormaster.

Blank stated, “I am a huge fan of Dennis and I will be eternally grateful to him for having taken on an essentially undefined position and making great things come of it—far more than expected.  His instincts and experience as a world-class (and first class) yachtsman are largely responsible for coalescing and convening the processes, resources and capabilities we now have in the Harbor Department and ultimately defining the Harbor Department we wanted and now have.”

Commissioner Chair William Kenney told The Log: “I do want to reinforce Paul’s comments about Dennis Durgan.  He assumed an undefined role, created a cohesive staff, set initial policies in place and showed the City Council and the residents of Newport Beach how important the harbor is to our community and why the takeover of the harbor by the city is so important.  In my opinion, the City Council, the residents of Newport Beach and the boating community owe Dennis a huge thank you for his willingness to take on an undefined role, to devote the long hours which he put in, and for the success he achieved in such a short period of time.  Had it not been for his achievements we may not have a Harbor Department and a new Harbormaster today.”

In a “Week in Review” newsletter sent from Leung on Nov. 30, she stated Durgan is in negotiation to help with Borsting’s transition.

4 thoughts on “There’s a new harbormaster in Newport Beach”