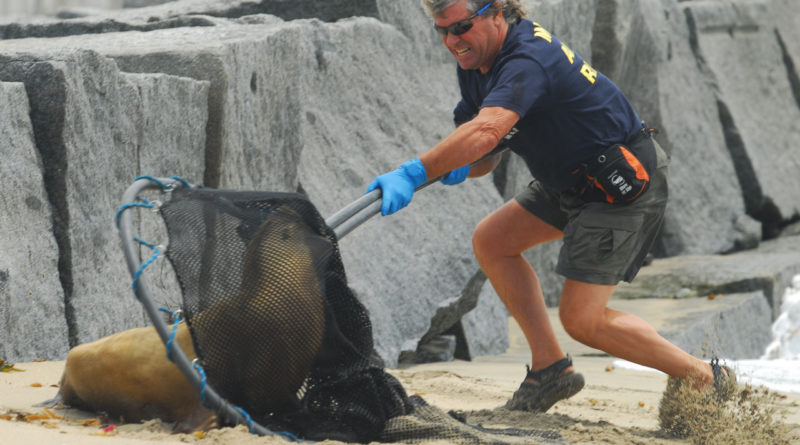 August 11, 2007. Photo by Steve McCrank. Peter Wallerstein quickly wrestles a net around a sealion that beached herself at the outer Cabrillo Beach, near the breakwater, in San Pedro. The adult female appears to be sick and thin and will be brought to the Marine Mammal Care Center in San Pedro.

The Marine Animal Rescue hotline gives boaters, beachgoers and the public someone to call 24-hours a day, seven days a week to report sick and injured marine animals in Los Angeles County and on Catalina Island.

MARINA DEL REY—“I sent somebody down; they got a sea lion on the tug boat?” Peter Wallerstein said to a Port of Los Angeles tug boat owner who called his 24-hour hotline on a rainy Thursday morning in March.

“I have never missed a call in 35 years,” Wallerstein said sometime later after hanging up.

Wallerstein is the founder and president of Marine Animal Rescue (MAR), a 501(c)(3) non-profit organization operating in Los Angeles County and Catalina Island as an emergency rescue group for sick and injured marine wildlife. Calls come in 24-hours a day, seven days a week. He’s helped boaters with sea lions on the dive step of their boats at Marina del Rey’s Burton Chace Park guest docks and helped commercial anglers in the Port of Los Angeles where skinny and hypothermic sea lions seek refuge on deck. He has also cut whales from gill nets off the coast of Palos Verdes, saved sea lions with packing straps around their necks and rescued emaciated sea lions stranded on local beaches.

Calls frequently bring him to Marina del Rey’s Burton Chace Park guest docks – a popular hangout spot for boaters and sea lions alike. Calls to this area often include boaters with sea lions on boats and callers reporting a sea lion with something around their neck.

The same rainy Thursday morning in March, a large group of sea lions were lounging on the docks and Wallerstein pointed to a lethargic sea lion resting near the end of one of the docks.

Wallerstein said sea lions with gill nets or plastic packaging around their necks will eventually die if they are not rescued.

“We’ll eventually rescue him and he’ll be okay,” Wallerstein said.

Once an animal is rescued, it is trucked to a marine animal rehab facility in San Pedro, which treats and releases the animal.

Wallerstein encourages the public to never approach sea lions or other marine animals stranded on the beach or injured on boat docks but to contact his hotline, 800-39-WHALE for emergencies and 310-455-2729 for non-emergencies. Female sea lions typically weigh around 200 pounds, while males can reach as much as 600 pounds; both have a bite that can go down to the bone.

Wallerstein has been rescuing whales, sea lions, seals, dolphins and other marine animals since 1985. He said there was no specific organization in the county dedicated to rescuing marine animals, with the responsibility mostly falling to the county and city services, who Wallerstein said were unknowingly using harmful methods to deal with the marine animals.

“Animals were dying on the beach and I thought that was unacceptable for LA, I thought we could do better than that,” Wallerstein said.

Prior to founding MAR, Wallerstein had been working as the Pacific Director of the Sea Shepherd Conservation Society, an international marine wildlife conservation organization. He said the idea for MAR started when he saw a news program about whales entangled in gill nets.

“I thought it was somewhere far away and it was right off Palos Verdes and Point Dume,” Wallerstein said. “There wasn’t a coordinated response to go out and help the animals, there was nobody doing it. So I bought a boat, bought some kitchen knives and went out there and starting cutting whales out of nets.”

One of his first calls was about a mother whale and her baby entangled in a gill net off the coast of Palos Verdes. He said he bought a boat, got a crew and went out. They were eventually successful, and mother and baby swam off free.

“That rescue motivated me to start it [MAR],” Wallerstein said.

In 1985, Wallerstein founded the Whale Rescue Team, a local skilled response group for whales in Southern California that were becoming entangled in fishing gill nets, a practice that was eventually banned by the state in 1993 after thousands of marine animals were killed. He established a live 24-hour toll-free hotline for reporting marine animals trapped or in distress. He then received authorization from local beach authorities to act as first responder and was granted a Letter of Authorization from the National Marine Fisheries Service to evaluate and rescue entangled marine animals. His efforts started naturally carrying over to all sick and injured marine wildlife and in 2007, Whale Rescue Team was renamed Marine Animal Rescue.

MAR’s office is based in El Segundo and Wallerstein himself, nearby, in an ocean-side RV park on Dockweiler Beach. Wallerstein said he sold his home in Topanga and moved to Dockweiler Beach to be closer to the calls. Marine Animal Rescue is stamped on the side of his RV and everything he needs to make a rescue – his 16-foot rescue boat and pickup truck – is hitched outside.

Wallerstein did, for the most part, rescues by himself for 25 years, devising the techniques to rescue the animals himself.

“Everything I know I taught myself,” Wallerstein said.

He now has a rescue team of three – Artie Wong and Brad Torsone help with rescues in Los Angeles County and Capt. Jon Council handles all the rescues on Catalina Island. They are on call 24/7.

“Sometimes I have to call them in the middle night if a sea lion crosses the street and gets somewhere – in someone’s yard or under someone’s car – I can’t tell the people we’ll be there in the morning,” Wallerstein said.

Wallerstein said lifeguards and harbor patrol are also vital partners in the operation, alerting them to injured marine animals and assisting with rescues.

Wallerstein admitted his age has slowed his ability to personally respond to every rescue. He said at some point in the future he hopes to find a successor to take over MAR, his life’s work. For now, it’s life as usual.

“I just do this,” Wallerstein said. “This is my life.”