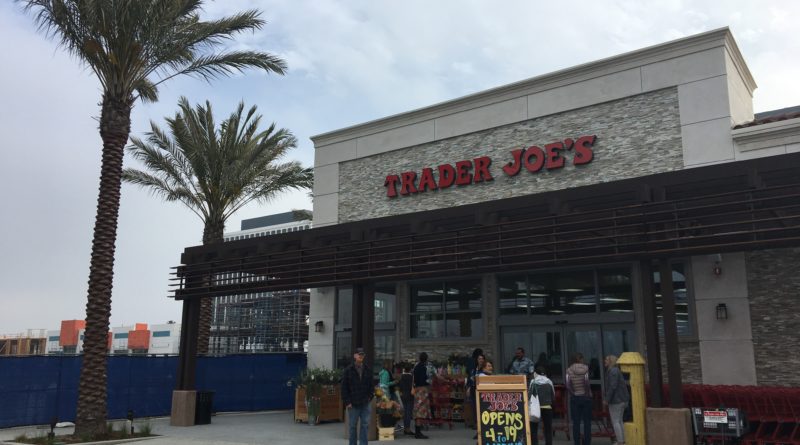 MARINA DEL REY—The delays just kept on coming, one after another … but the Marina del Rey Trader Joe’s, as of April 19, is finally open for business. Trader Joe’s in Marina del Rey was initially scheduled to open on April 12, but the store’s headquarters announced the grand opening was delayed to a date later in the month. An April 19 opening was finally announced – a couple hours before midday on April 18.

Chatter of a Trader Joe’s on the Marina del Rey waterfront goes as far back as 2015, when plans to redevelop Pier 44 began to take shape.

Plans hinted at the waterfront Trader Joe’s including a dock, specifically for boaters who want to shop at the store from the water (as opposed to dealing with traffic and parking issues on land).

This photo, taken shortly after the store opened on April 19, shows work is still underway on portions of Pier 44. Behind the blue fence on the left side of the photo is the store’s waterfront, where boaters would tie up if a dock were indeed installed. The fencing certainly indicates waterside access, at least for now, won’t be available. The Log will monitor the progress of Pier 44’s redevelopment and report on when (or whether) Trader Joe’s will have a dock for boaters to access the store from the water.