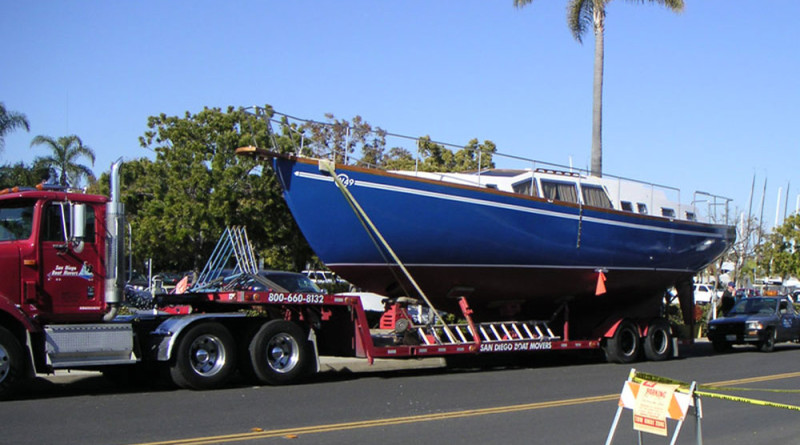 SAN DIEGO — There are more than two dozen marinas in San Diego Bay, Mission Bay and Oceanside. Not all boats navigate into any one of those marinas by way of sea; a handful of vessels are delivered to the water via a moving service.

All sorts of boats move in and out of San Diego Boat Movers’ custody. There are currently four boats on the 3-acre yard being rebuilt, according to company owner Leland Parsons, who bought the company more than three years ago from Larry Woods.

“There has been a lot of interesting boats,” Parsons said. “I tried to buy the company [more than] 40 years ago.”

Parsons’ unsuccessful attempt to become the owner of San Diego Boat Movers in the 1970s came full circle in the 2010s. See, it was about 40 years ago when Woods assumed ownership of the boat haul company. Fast forward to 2005, San Diego Boat Movers helped Parsons launch his 66-foot schooner into the water. Soon after, Parsons told woods whenever he was ready to sell, Parsons was ready to buy.

Parsons jumped at the opportunity a few years later.

Few people would wait as long as Parsons did to buy something they had their eyes on for so long. Then again, Parsons is no stranger to patience; he spent 29 years building the 66-foot schooner he launched with Woods in 2005.

Parsons is also an avid boater, living aboard a vessel with his wife in Half Moon Bay. His passion for boating fuels how he runs his business.

“I am a shipwright myself. I am a boat person. I own about five boats. It’s fun to be a boat owner and a boating enthusiast,” Parsons said. “We do what we can to help [other boaters].”

On average, San Diego Boat Movers haul about 350 vessels per year, according to Parsons. Some are transported on land by trailer. Every once in a while, Parsons is challenged to find a way to get the boat from an inland location to a harbor. One example was a 73,000-pound fishing boat build near Fort Bragg in Northern California.

“It was a 50-foot steel fishing boat, built 4 miles in the woods. We had to get it out of the Redwoods,” Parsons said. “We had three Highway Patrol officers. Once we got it to the harbor, we had to transfer it from trailer to the dollies. It was quite a feat.”

In most situations, however, Parsons has his movers pick up a vessel from a boatyard. The boats are then placed onto a trailer and transported to a harbor, where a travel lift is used to have the vessel dropped into the water.

The boat hauling company primarily transports sail or power boats too big to put on a “normal” trailer.

Large or “behemoth” hauls are also within San Diego Boat Movers’ job description and are done in the middle of the night with utility crews accompanying the transport to assist with overhead wires.

A sampling of vessels transported by San Diego Boat Movers include a 34-foot trawler from Long Beach to Alameda, a 36-foot power boat from the San Francisco Bay Area to San Diego and a 54-foot sailboat delivered from a boatyard in Richmond to a marina in Oakland.

The company also performed custom hauls, such as prepping a 72-foot sloop to be delivered as cargo from the Port of Oakland to the East Coast or removing a mast from a racing sailboat so it could be shipped from the San Francisco Bay Area to Hawaii.

More information about the boat hauling company can be found at sandiegoboatmovers.com. San Diego Boat Movers is located at 6996-A Mission Gorge Road in San Diego.