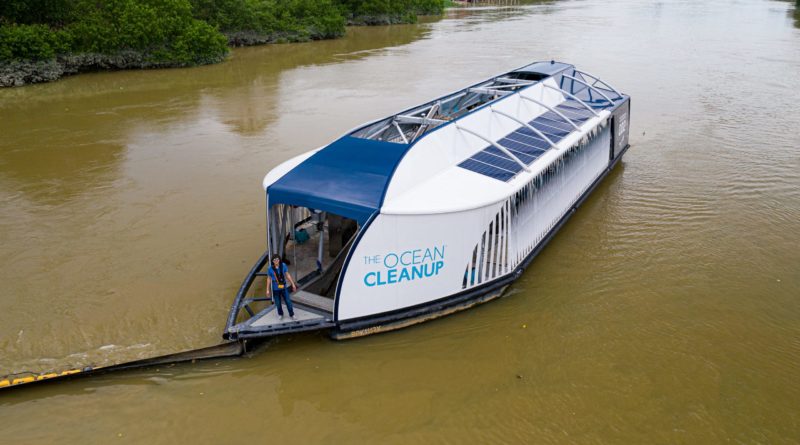 Los Angeles County will be testing out a device called Interceptor in a 24-month pilot program in partnership with Ocean Cleanup, a non-government engineering environmental organization based in the Netherlands.

MARINA DEL REY—Come fall, a section of Ballona Creek in Marina del Rey could have a new solar-powered, trash eating machine. Los Angeles County entered into an agreement with Ocean Cleanup for the Ballona Creek Trash Interceptor Project in late 2019 and pending permits, the trash collecting vessel will be deployed in the fall of this year, according to the county’s Department of Public Works (DPW).

Ballona Creek is an 8.8-mile-long flood control channel, which drains the 130-square-mile Ballona Creek Watershed and provides flood risk management for approximately 1.5 million residents. The waterway runs parallel to Marina del Rey Harbor and dumps into the Santa Monica Bay. DPW Stormwater Quality staff said floatable debris that flows out of Ballona Creek can loop into the marina as well as end up in Santa Monica Bay and the ocean.

Seta Marjanian from the county’s Department of Public Works (DPW) gave a presentation on the pilot project to the Small Craft Harbor Commission on Feb. 12.

“This is a pilot project to test the efficiency of the interceptor in capturing floating plastics and other trash in Ballona Creek,” Marjanian said during the presentation.

The Interceptor will remove debris from the watershed using a barrier, which guides waste towards the opening of the vessel. The water flow then moves the debris onto a conveyor belt, which delivers the waste to the shuttle. The shuttle then automatically distributes the debris across six dumpsters on a separate barge. The dumpsters are then brought to land and items trashed or recycled.

Marjanian said the DPW could look to the Department of Beach Harbors (DHB) for cranes for trash disposal, facilities for collecting and sorting recycling and as a potential site for assembling and launching the vessel.

“The primary focus as far as the partnership goes with any interest with the Small Craft Harbor Commission and DBH is use of DBH’s facility for maintenance purposes and cleanup,” Marjanian said.

County officials hope it will help clean up both local and global waterways. Ocean Cleanup also hopes it helps them realize their goal of reducing floating ocean plastic by 90 percent by the year 2040.

DPW Stormwater Quality staff said it is anticipated the Interceptor will have a monitoring system to track the amount floatable debris that bypasses the vessel and flows into the bay.

If the pilot project is deemed successful, the ownership of the Interceptor will be transferred from The Ocean Cleanup to the Flood Control District free of charge, DPW Stormwater Quality staff said.

The DPW also has other trash abatement measures in place in Ballona Creek. A trash boom has collected debris for the past 10 years at the Lincoln and Culver Boulevard bridges, about 2-3 miles upstream of the mouth of the creek, serving as “last line of defense” for the urban watershed. During the 2019‑2020 storm season (Oct. 15-April 15), DPW Stormwater Quality staff reported approximately 34 tons of floatable debris – including vegetation – has been collected from behind the existing boom as of Feb. 25.

Marjanian said there are enhancement plans in the works to replace the existing boom with a boom with finer mesh and deeper netting.