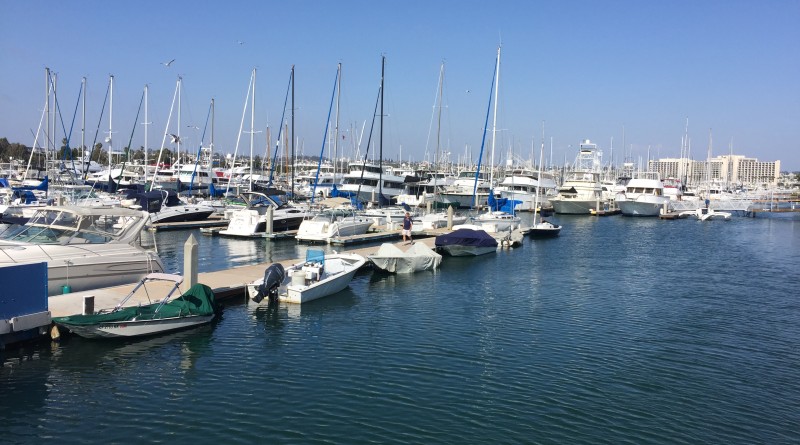 This east-looking view on Harbor Island could soon be filled with a new hotel space and other visitor-serving accommodations after the Port of San Diego backed two developers to pursue redevelopment of boating-themed peninsula.Parimal M. Rohit photo

SAN DIEGO — Some boaters like the fact Harbor Island and its marinas are so close to San Diego International Airport. If they ever want to travel somewhere by air the airport is a very short taxi or Uber drive away. However being so close to a major airport also means having plenty of hotel space nearby to accommodate travelers.

Boaters might have to welcome more hotel rooms at the eastern edge of Harbor Island, complementing the handful of transient occupancy destinations already on the manmade peninsula, as the Port of San Diego’s Board of Port Commissioners green lit a development project involving two local firms on Sept. 8.

Oliver McMillan and Sunroad Enterprises will be splitting portions of a to-be-developed area of Harbor Island and building a new hotel, among other visitor-serving amenities.

The commission chose to go with both development teams despite port staff recommending Oliver McMillan over Sunroad Enterprises.

“These are first-class, world-class developers,” said Commission Chair Marshall Merrifield. “They can get [this] done, these two players. I want them both.”

The port district will pursue exclusive negotiations with both firms, designating most of the land development to Oliver McMillan. Sunroad Enterprises would develop the “elbow” connecting Harbor Island to the mainland.

Port district staff had recommended Oliver McMillan over Sunroad Enterprises as the sole developer and firm most likely to execute the port’s vision for Harbor Island.

However commissioners believed the process – which focused on qualifications, not a proposal – was incomplete. Commissioners acknowledged Oliver McMillan’s concepts were creative but worried a lot of time would be needed to properly vet out and study how the firm’s plans could be executed.

Sunroad Enterprises President Aaron Feldman echoes similar sentiments, telling commissioners he disagreed with the port staff’s recommendation – not because they selected Oliver McMillan but instead the staff report to commissioners lacked some substantive information.

“I generally have a very good working relationship with your staff, but in this case I think they got it wrong,” Feldman told commissioners. “In the report that was presented to you there really wasn’t an analysis of the feasibility or achievability of the different aspects of the project. They didn’t provide with enough history of the site.”

Feldman also told commissioners Sunroad Enterprises paid the port district $40 million in rents during the life of its tenancy. He continued Sunroad Enterprises is qualified to redevelop the eastern portion of Harbor Island because it has historical knowledge of the proposed project site and a “deep understanding of the port process.”

Oliver McMillan’s proposed entering into a 66-year term with the port, investing at least $782 million to revitalize the eastern portion of Harbor Island.

“This is about the water. We see this becoming a destination people want to go to, be at, stay at, like they have at Seaport,” Buss told commissioners.

The final vote was 5-1, with Commissioner Garry Bonelli voting to move forward with a single development team.

“What we’re really getting here is two top quality development companies. We’re getting two for the price of one here,” said Commissioner Dan Malcolm. “We’re getting double the creativity … on an area we’ve identified as a very important development area.”

Commissioner Rafael Castellanos did not participate in the hearing because of a potential conflict of interest; his firm has a relationship with one of the involved parties.