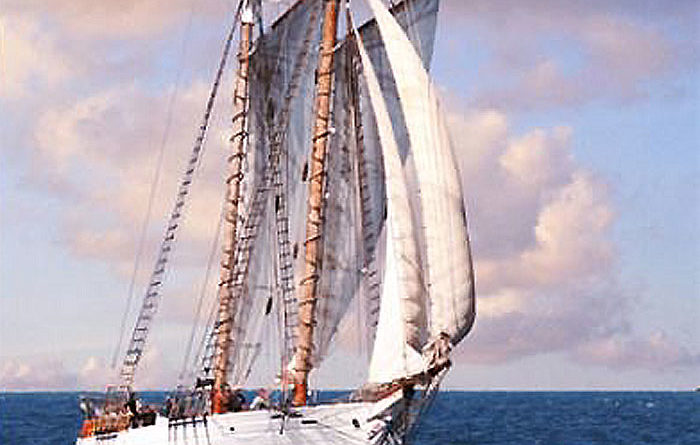 DANA POINT — Two women taking part in a mock cannon battle at a Southern California tall ship festival were hit with real ammunition and left with minor injuries, when buckshot was reportedly loaded by accident into one ship’s cannon instead of blanks.

Amazing Grace, a tall ship based in Gig Harbor, Wash., fired at the vessel Bill of Rights, hitting two people on board during a Dana Point festival that celebrates 19th century seafaring, authorities told the Orange County Register.

One of the women hit, Bill of Rights deckhand Donna Reed, said she and volunteer Laura Huber were struck by multiple pellets.

“It was like a scene from ‘The Exorcist,'” Reed told the Los Angeles Times. “I started to bleed in several different areas.”

Reed said she was still sore four days after the Sept. 9 accident, and still had some of the pellets in her leg because doctors said it was safer than removing them.

Both ships would normally use small cannons that use blank charges that look like common shotgun shells. It was not clear how the buckshot ended up getting loaded into the cannon.

“The plan is to never shoot live ammunition,” Bentley Cavazzi, chief operations officer for the Ocean Institute, which runs the festival, told the Los Angeles Times.

Orange County sheriff’s spokeswoman Gail Krause told the Register her department is awaiting the outcome of an investigation before deciding whether to pursue charges of negligent discharge.

But Reed, a South Carolina native who recently took a job on the ship as a deckhand and public relations representative, said that regardless of the reason, she and Huber hold no grudge against the crew of Amazing Grace. In fact, one crewmember is a nurse who was the first to help them.

“We are both fine and just glad it was not more serious,” Reed told the Register. “Who else can say they have been shot by a cannon?”