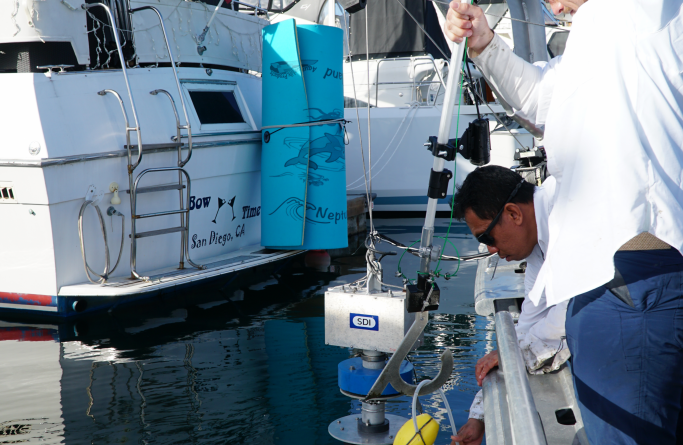 The Port deployed the incubator’s seventh project, ecoSPEARS, which will remove PCBs from contaminated sediments in America’s Cup Harbor; and approved its ninth project, FREDsense, which will provide real-time metals analysis for stormwater monitoring in the bay.

SAN DIEGO—In the same way Silicon Valley made a name for itself in the technology field, some at the Port of San Diego are hoping to do the same for San Diego Bay in the blue economy sector. The Port created the Blue Economy Incubator in 2016 to launch blue tech ventures in the bay and the seventh project to come out of the program was recently deployed and a ninth was recently approved.

On Dec. 14, ecoSPEARS was deployed in America’s Cup Harbor for a two-year pilot project. ecoSPEARS uses a NASA-developed technology, Sorbent Polymer Extraction and Remediation System (SPEARS), to remove toxic contaminants from sediment and will be used in the harbor to remove Polychlorinated Biphenyls (PCBs).

“The goal here is to help develop technologies that will result in a cleaner bay,” Castellanos said.

SPEARS uses a scalable mat-liner of plastic spikes filled with a proprietary reagent to reach contaminated sediment around challenging areas such as piers, harbors, pylons, or sensitive wetland areas where dredging may not be feasible. The technology absorbs PCBs like a sponge without the use of any harmful chemicals or byproducts and without harming the aquatic habitat.

“We expect that this will have a direct benefit in cleaning up our environment in the San Diego Bay,” Castellanos said.

The Port of San Diego also approved a ninth pilot project with FREDsense Technologies Corp to develop a portable five-in-one field-testing sensor device to provide real-time metals analysis for stormwater monitoring. FREDsense will utilize their pre-existing titration platform optimized for the environmental remediation industry to produce an automated testing system for stormwater analysis, which will test the levels of various metals in San Diego Bay including aluminum, copper, lead, zinc and nickel, all of which are currently manually monitored under the Port’s stormwater programs. The project will provide real-time data in the field eliminating the need for laboratory testing, which can take several weeks for results. It is also expected to result in a cost savings for the Port.

“Essentially a portable laboratory that can give us results on whether there are heavy metals in the water within five minutes, real-time basically, as opposed to waiting days and even weeks to get results back from a regular lab, very innovative and will be very, very helpful,” Castellanos said.

During the two-year pilot project, FREDsense will create the first prototype and test the device to monitor stormwater. Results from the pilot project will allow for case study development in preparation for full commercialization and regulatory approvals.

“This is something we hope can be optimized and commercialized for application throughout the world,” Castellanos said.

The Port will provide $200,000 in funding to each project in addition to other support including permit-ready infrastructure.

The Port created the Blue Economy Incubator in 2016 to act as a launching pad for sustainable aquaculture and port-related blue tech ventures by providing funding and support services focused on pilot project facilitation.

“I think this is extremely innovative and I think we’re one of the few ports around the world that are doing this and I think the San Diego region has a reputation for innovation and collaboration and I’m very excited that the Port of San Diego is involved in that innovation,” Castellanos said.