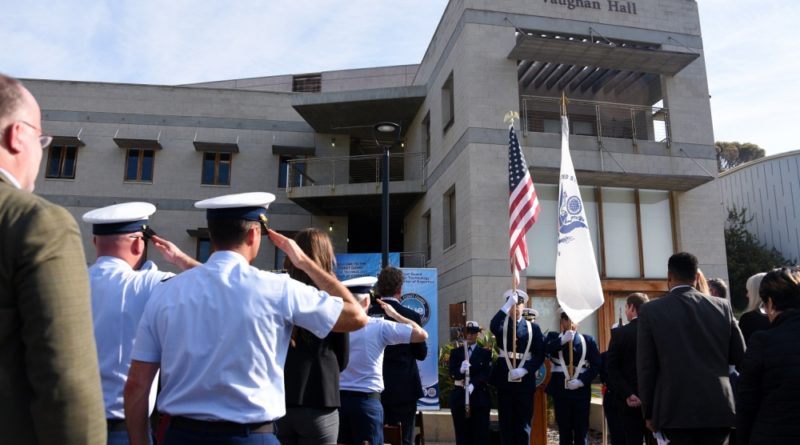 The Coast Guard and Scripps Institution of Oceanography launched the Blue Technology Center of Expertise (COE) on the institution’s La Jolla campus with a ribbon-cutting ceremony and expo Jan. 24.

The Coast Guard was authorized to establish the Blue Technology COE by the 2018 Save Our Seas Act. Blue technology is any technology, system or platform designed for use above, on or below the surface of the ocean that can support or facilitate Coast Guard maritime domain awareness, search and rescue, emergency response, maritime law enforcement, marine inspections and investigations.

“They [Coast Guard] turned to Scripps as being a leader in oceanography,” said Jennifer Ibaven, one of two new program managers at the Blue Technology Center.

The Blue Technology Center is comprised of two offices and two program managers on the campus. Ibaven joined the La Jolla campus in February. Ibaven said the second officer will join in mid to late March.

“Part of our job through the center is to establish relationships with the Coast Guard and academia, other federal agencies, industry, non-profits, to discover blue technologies and see how they can address any challenges the Coast Guard is facing,” Ibavaen said.

The two program managers will serve as liaisons of sorts, talking to the Coast Guard about their needs and Scripps about their research and technology and proposing ways for those technologies to fill Coast Guard gaps.

“The Coast Guard has 11 missions that it tries to achieve,” Ibavaen said. “We’re hoping that we’re going to be able to find some technologies that will help us.”

“Maritime Domain Awareness (MDA) [anything impacting the security, safety, economy, or environment] is currently a high-visibility focus area for the Coast Guard, and any existing technology that will help with MDA is an ideal candidate for consideration via the BTCOE,” said Wendy Chaves, U.S. Coast Guard Chief of Research, Development, Test and Evaluation and Innovation, in an email. “This could include unmanned systems such as unmanned aircraft systems, unmanned surface vehicles, unmanned underwater vehicles, sensors and other technologies.”

Scripps’ fleet of four research vessels—R/V Sally Ride, R/V Roger Revelle, R/V Robert Gordon Sproul, and the new scientific workboat R/V Bob and Betty Beyster, and the famous research platform FLIP – are equipped with state of the art technology, including unmanned technologies such as unmanned aircrafts and underwater robots, among others.

Scripps has researched, worked with and even developed several unmanned vehicles, including wave-gliders – long-duration ocean robots which measure things such as water temperature, salinity, currents and plankton size.

In 2015, one of Scripps’ underwater robots roamed the area near the oil spill off Santa Barbara to collect data to build models to predict how far and where the oil slick would travel.

In 2017, Scripps teamed up with the Icelandic Coast Guard on a groundbreaking study of the extreme ocean surface conditions that characterize the waters off Iceland’s coast to provide ocean condition situational awareness to the ICG for their maritime mission to serve and protect commercial marine traffic. Wave gliders were used in the study to make long-duration mobile measurement platform of the winds and ocean response to the weather.

CDIP has been around since the 1970s. The program runs an extensive network of buoys across the U.S., which monitor waves and other information along the coastline. CDIP Programmer/Analyst Randy Bucciarelli said they have 70 buoys around the U.S., most in the line of sight from the coast. The buoys measure data every second and send a reading every half hour of wave height, wave direction, wave period and sea surface temperature.

“They [Coast Guard] use our data in search and recovery but they also help us if the buoys get hit, and these things are drifting around, they help us go get it,” Bucciarelli said.

The program’s real-time measurements are distributed to thousands of users – harbor masters, lifeguards, mariners, recreational boaters, surfers and beachgoers- each and every half hour through NOAA’s National Weather Service and National Data Buoy Center.

“In the case of this, where there are 20-feet waves, that’s a hazard and you want to know what’s going on,” Bucciarelli said talking about the real-time wave data for Hawaii while giving The Log a tour of the CDIP center on Feb. 10.

While the data can be used by recreational boaters, lifeguards and harbor masters to determine average wave height and direction, the buoys also provide more detailed information used by scientists and engineers.

“At any given moment there could be seven different swells in the water and so these [buoys] break them all down and that’s what of interest to a lot of the wave modelers and scientific engineers, they want to know what the different swells are not just the averages or the peak,” Bucciarelli said.

The data collected from the buoys can be compared to wave prediction models to determine the accuracy of the models; it can also be analyzed by coastal engineers and oceanographers to determine wave direction and energy. The Army Corps of Engineers is a major stakeholder and funding source of the program. The Corps uses the long-term wave climatology to help design decisions along the coast.

The HF-Radar Network delivers near real-time ocean surface current measurements through a network of shore-based radar systems. The radar reads what direction the water is moving and how fast it is moving, as well as eddies – circular currents of water. The system is part of a national network of HF radars facilitated by NOAA’s Integrated Ocean Observing System (IOOS).

“If there were ever someone over board or lost that’s where the circulation and ocean currents get taken into play,” Bucciarelli said.

Most of the remote sensing technology is shore-based, with installations along cliffs and near shorelines. However, in 2010, Scripps installed mapping radar on the BP-operated oil platform Atlantis in the Gulf of Mexico. The radar data has been used to identify and map in near real-time the loop current and eddies in the Gulf. The technology could also provide helpful information for cleanup efforts should an oil spill occur.