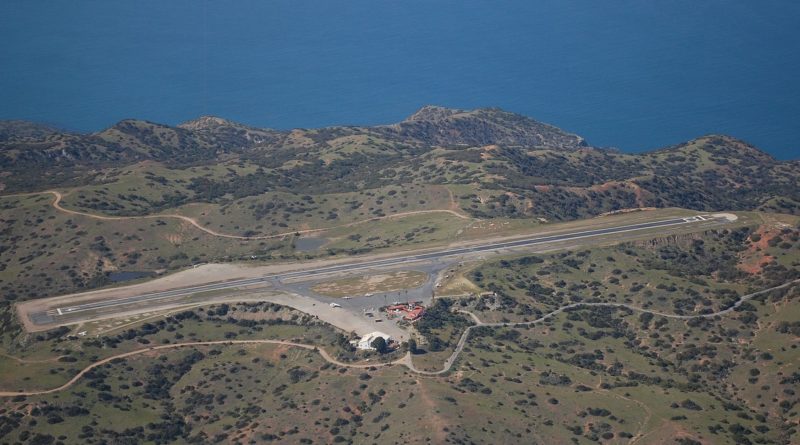 Catalina Conservancy reached out to the military to repair the runway, which the organization had been spending an average of $250,000 a year to patch. California Department of Transportation’s Aeronautical Division informed the Conservancy in Sept. 2018 that update would be needed to keep Airport in the Sky a public airport. (Spartan 7W photo)

Visitors will be able to watch military repair the runway, a $5 million undertaking providing service members with “construction skills and mission essential tasks.”

CATALINA ISLAND—Airport in the Sky does not only serve as an active airport, but is also a much loved tourist attraction on Catalina Island. Countless articles, books and other media have featured this interesting site including The Log. In November 2018, however, it was announced the airport needed a little TLC. Catalina Island Conservancy, coincidentally, found someone up for the task.

The Conservancy, the nonprofit organization overseeing the airport’s operation, struck a deal with the U.S. Marine Corps back in November 2018 to take over the much needed revitalization project. On Catalina there are a long list of projects in need updating and the Conservancy takes on quite a bit; funding can also be a dilemma in some circumstances. The stars, however, aligned for the Airport in the Sky project to come online now.

According to a release by Catalina Island Conservancy: “The Conservancy operates the Airport in the Sky as a public airport that serves the Island’s businesses, 4,000 residents and approximately 1 million annual visitors. The airport is a favorite destination for pilots, who land and take off from the airport about 14,000 times annually.”

In addition, the airport provides access to first responders, visitors, residents, businesses, and, importantly, a package delivery hub for U.S. Mail and other postal services. Emergency and medical supplies reach the Island in an annual amount estimated at 3.5 million pounds via the airport.

The Conservancy had been repairing and patching the airport’s runway, which amounted to about $250,000 a year. In September 2018, California Department of Transportation’s Aeronautics Division informed the Conservancy they would need to have a long-term repair plan to continue to operate as a public airport.

In a timely coincidence, a Navy Seabee happened to be visiting the airport with the Innovative Readiness Training process. The Seabee suggested the Conservancy reach out to military personnel to form a partnership that could see military training benefits, but also make repairs to the runway. The Conservancy worked with the Office of Assistant Secretary of Defense, U.S. Navy personnel and I Marine Expeditionary Force at Camp Pendleton for more than 18 months to forge this partnership.

The release continued: “This partnership is a win-win for all: The Airport in the Sky’s runway will be repaired – adding 75-100 years of life to the Island’s main airstrip – and the Department of Defense, the Marines and Sailors (Seabees) will benefit from the unique training opportunity which targets construction skills and mission essential tasks.”

The runway repair project is quoted at $5 million dollars, which includes an estimated $1 million savings the Conservancy will receive by outsourcing the project to the military.

“Because the Runway Repair Project provides a training opportunity, the Marines and Navy are bringing the equipment, troops, housing, meals and other tools needed for pouring the concrete to the Island and will perform the repairs at no cost to the Conservancy,” said the release.

What should visitors know during construction?

More than 70 U.S. Marines and Navy Sailors arrived on the Island on Jan. 9 in addition to 30 that had arrived the previous week.

While the main runway will be closed for construction, tourists will still have the chance to visit the airport’s restaurant, DC3 Grill, the Nature Center and nearby trails. Another draw is that visitors will be able to watch the Marines and Seabees construct the project.

There will be no disturbances in Avalon as military will be flown directly to the site.

At this time, the Conservancy estimates the runway will be open in April if, of course, weather and other factors cooperate.

A release said, “The Marines and Sailors expect to finish repairs by late March 2019, and the airport is slated to re-open to the public soon thereafter, depending on weather and other factors. The troops will work six days a week and they will rotate on and off the Island over the course of the project, ensuring more Marines and Sailors benefit from the training opportunity.”

Strangely enough, this is a bit of a history repeat and this is not the first time U.S. military forces have occupied the island – military also has connection to the Island during World War II and the Civil War. Famously, Marilyn Monroe lived on the island while her first husband was enlisted.