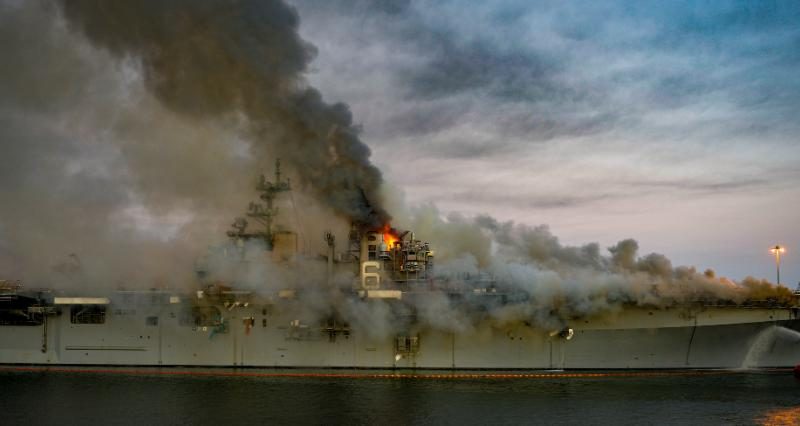 SAN DIEGO—Fire crews from multiple agencies reportedly made substantial progress in putting out a blaze aboard the U.S. Navy amphibious assault ship, USS Bonhomme Richard, in San Diego. The fire began aboard the ship on July 12; flare ups and hot spots persisted through July 15, with hundreds of sailor and firefighters reportedly working to put out the blaze.

USS Bonhomme Richard, which is based in San Diego, is weeks away from its 22nd birthday; the Navy ship was commissioned on Aug. 15, 1998.

The cause of the fire, which started in a lower storage area, is still under investigation, according to news reports.

The Port of San Diego Harbor Police was among the agencies who joined the U.S. Navy in battling the ship fire.

The San Diego Union-Tribune, on July 15, reported 23 civilians and 40 sailors were injured while trying to put out the fire.

A July 13 tweet by the U.S. Navy stated 36 sailors and 23 civilians were being treated for minor injuries, “including heat exhaustion and smoke inhalation.”

The fire was not declared extinguished as of July 15. This story will be updated online at thelog.com.