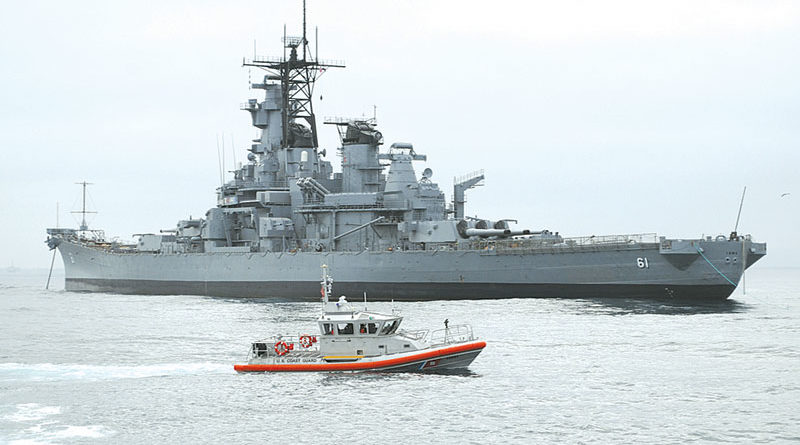 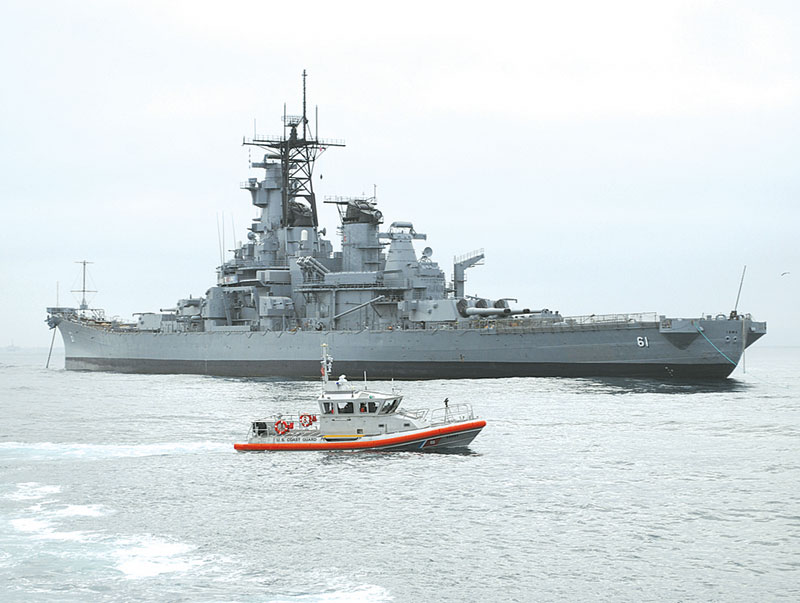 LOS ANGELES — After spending years in the Navy’s Suisun Bay mothball fleet, the 887-foot battleship USS Iowa has completed its final journey down the coast from San Francisco Bay to Los Angeles.

The ship, known as the “Battleship of the Presidents,” is scheduled to be moved at 2 p.m. June 9 to its new home at San Pedro’s Berth 87 along Los Angeles Harbor’s main channel, and will be open to the public as a floating museum.

Robert Kent of the Pacific Battleship Center — the group responsible for getting the ship awarded to Los Angeles — was aboard the 58,000-ton vessel as it began its tow from the Port of Richmond underneath the Golden Gate Bridge on its way south.

“We were on the tug as it went under the bridge, and it was just an amazing sight to see her,” Kent said, who had been overseeing the repairs and repainting being done on the ship over the past few months. “If you didn’t see the towline in front, you would have thought she was in active service, heading out to sea.”

After departing San Francisco Bay May 26, USS Iowa arrived outside of Los Angeles Harbor May 30, where former crewmembers Bryan Moss and Dick Blair got to welcome the vessel to its new port.

Commissioned in 1943, USS Iowa is the last surviving World War II battleship not yet turned into a museum or scrapped. It was finally decommissioned by the Navy in 1990. On July 4, before the general public can go aboard, past crewmembers and veterans will be able to board USS Iowa and remember the ship as it once was.

“We’ll be able to get on the ship when we want to, and how we want to,” Moss said, who was a radioman, first class, aboard the vessel (1952-1953). “We were always safe aboard this guy. Seeing everybody during that reunion will be special.”

After arriving in Los Angeles Harbor, the ship underwent a thorough hull cleaning, and has been cleared to enter the harbor for its June 9 debut at Berth 87.

Once docked, the ship will undergo preparations for its grand opening celebration July 7, when the ship will open to the public for tours.

The ship will serve as an interactive naval museum and living memorial, and tickets can be purchased online at pacificbattleship.com. After July 7, the ship will be open seven days a week, from 10 a.m.-5 p.m.

Boaters looking to get a closer look of the battleship are being cautioned by the Coast Guard to keep a 100-yard safety distance from the vessel as it transits down the main channel, and to maintain a safe distance once the ship is docked.

Those hoping catch a glimpse from land of the vessel coming to port should head to Ports O’ Call Village. Enter from Harbor Boulevard and Sixth Street or 22nd Street and Sampson Way in San Pedro. The park area at the south end, in addition to any of the restaurants or waterside promenade areas, should provide viewing areas.

* In its 50 years of service, USS Iowa welcomed aboard more presidents than any other battleship in United States history.

* Nov. 12, 1943: President Franklin Roosevelt boarded USS Iowa from the presidential yacht at the mouth of the Potomac River for a secret meeting with Winston Churchill, Joseph Stalin and Chiang Kai-shek at the Tehran Conference.

* July 4, 1986: President Ronald Reagan and First Lady Nancy Reagan boarded USS Iowa for Liberty Weekend, the celebration of the restoration and centenary of the Statue of Liberty.

* April 24, 1989: President George H.W. Bush joined the crew and families of USS Iowa at the memorial service for the battleship’s 47 crewmembers who died in an explosion that occurred in the Number Two 16-inch gun turret April 19, 1989.