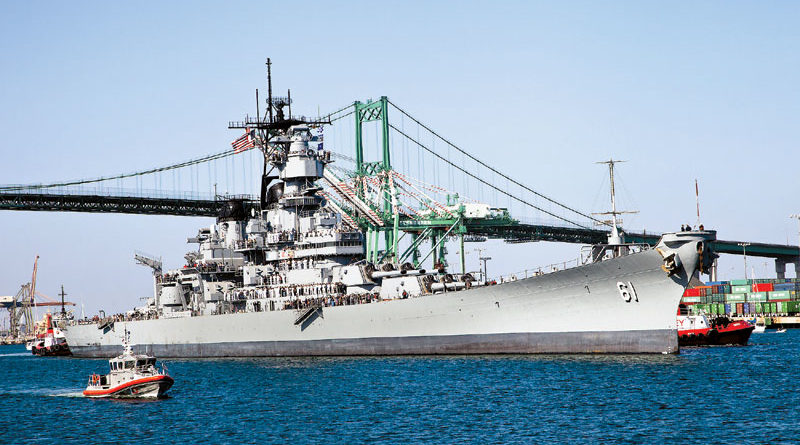 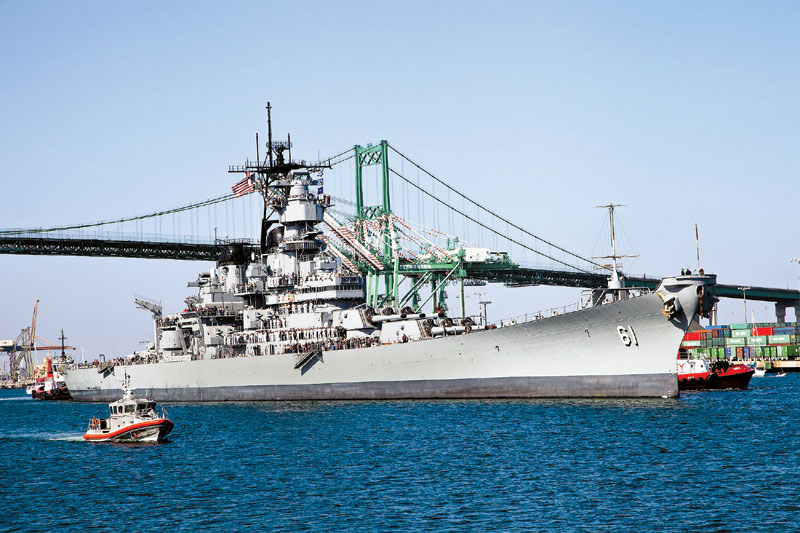 Departing just past 2:30 p.m. from its temporary berth near the Cabrillo Marina entrance, the 58,000-ton ship was towed down the Main Channel, assisted by four Crowley tugs and accompanied by scores of boats — including the brigantine Irving Johnson, Los Angeles’ official tall ship.

More than 800 guests were aboard USS Iowa during its tow to Berth 87, including veterans of the ship, financial donors, Pacific Battleship Center representatives, elected officials and media.

“We are honored to be the home of the USS Iowa and are eagerly anticipating its opening as an interactive naval museum,” said Los Angeles Mayor Antonio Villaraigosa, who was aboard the vessel during its transit. “The ‘Battleship of Presidents’ will have a place of honor in our city.”

The 3.4-mile journey took a little more than an hour to complete. The ship was towed underneath the Vincent Thomas Bridge — where it was turned in the main channel’s turning basin — before coming back down the channel, past the World Cruise Center and finally to Berth 87. There was only about 10 feet of clearance between the antennas atop the ship’s 174-foot mast and the bottom of the Vincent Thomas Bridge.

Known as the “Battleship of Presidents,” USS Iowa had been languishing in the Navy’s mothball fleet in Suisun Bay before the nonprofit Pacific Battleship Center, with president Robert Kent, was awarded the ship for use as an interactive museum in Los Angeles Harbor.

Work on the nearly 72-year-old battleship has already begun. Pacific Battleship Center staff and many volunteers began deck replacement and repainting work while USS Iowa was docked in Richmond.

With the ship now settled in at its new home, Pacific Battleship Center is focused on the public grand opening set for July 7, following a July 4 private celebration for veterans who served aboard USS Iowa.

The ship is scheduled to be open from 9 a.m.-5 p.m. daily, except holidays.

Tickets for the grand opening are now available at the group’s website, priced at $18 for adults ages 18-61, $10 for youths ages 6-17 and $15 for seniors ages 62 or older and retired military. Admission is free to active duty military personnel, including reservists with valid identification.

Commissioned in 1943, USS Iowa is the last surviving World War II-battleship that was not yet turned into a museum or scrapped. It was finally decommissioned by the Navy in 1990.

A bathtub was installed for use by Roosevelt during his transit for the Tehran Conference with Winston Churchill, Joseph Stalin and Chiang Kai-shek. The bathtub is still aboard the ship, and visitors will be able to view this unique feature during select tours.