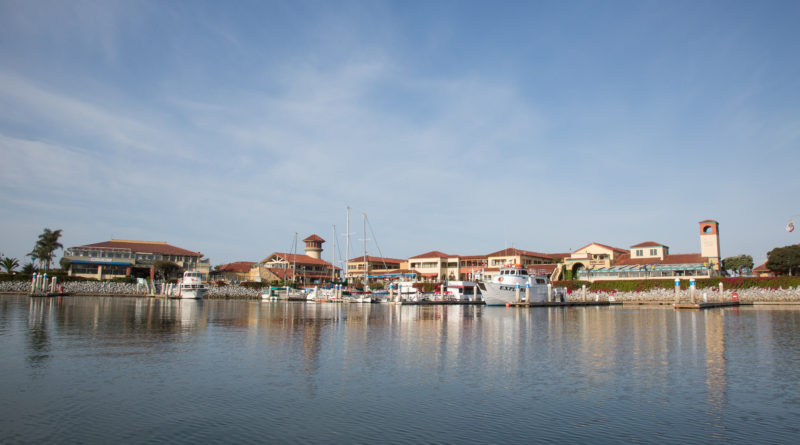 Ventura Harbor Village is getting revitalized just in time for summer.

VENTURA ― Ventura Harbor Village is going through a facelift as frequent village visitors may notice new landscaping and other added design features. As the city of Newport Beach is looking to draw more tourists by developing Mariners’ Mile, Ventura is busy with current and upcoming projects to attract more people to its harbor. Will these changes in Ventura Harbor make this quiet village a bustling tourist destination?

Palm trees, art and seating areas are just a few of the new features being added to the village in Ventura Harbor.

“I was at the village last week, and we have a new grand staircase design that’s being built and it’s starting to take shape,” Port Commissioner James Friedman mentioned.

This particular project provides village and parking lot improvements only. Nothing dockside is being updated at this time. However, there is an element of the nearby islands being added.

“The last piece will be what I call the ‘signature piece.’ There’ll be a circular area that’ll have a map of the Channel Islands. It’ll show each island the way it was hundreds of years ago, and there’ll be a shaded area to show how much bigger they used to be [compared to how] they currently are,” Oscar Peña, general manager of the Ventura Port District, said. “It’s just part of an educational process that we’re trying to convey to the public about the Channel Islands across the Pacific Ocean from us.”

There were some delays with the project timeline due to the unusually heavy rain season Southern California experience early this year. The plan was to have all the updates completed by start of summer.

“We obviously wanted to try to get it done before the heavy season, because the harbor becomes an extremely popular place in the summertime for obvious reasons,” Friedman commented.

The wet weather set the project back a couple months but is expected to be completed by mid- to late-July, according to Peña.

On May 24, the Ventura Port District will select one of two vendors to develop a hotel and restaurants or a fish market on either side of the village. When an RFP is selected, it will be passed onto the City Council for approval.

One frequent patron of Ventura Harbor Village and liveaboard on the harbor, Tony Alcock, thinks the changes being made to the village are a good thing for the businesses there. He did mention, however, the construction is a nuisance while the updates are being made

“I think it’s going to look great when it’s finished. It’s just very disruptive when it’s going on,” Alcock told The Log. “I imagine that most businesses here in the harbor are not really very profitable and now maybe with [the improvements that will] turn around a little bit.”

Alcock also hopes the plans include additional parking as parking is already limited.

“If you add more stuff and don’t provide parking, you’ve got a problem,” Alcock said.

Adding more parking will be necessary with more businesses, but Alcock thinks “it would be a big mistake to start charging parking.”

New restaurants in Alamitos Bay Landing has caused a slew of issues including infringement on boat owner parking in that Long Beach marina, as The Log previously reported.

Additional proposals for further development in the Ventura Harbor are in the works to draw more visitors and patrons to the area, which is the goal of the city.

Plans are being drawn up for several docks to be reconfigured at Ventura Harbor Village, but that project is still a couple years away from having a completed proposal and getting all the necessary approvals.

“So many people say it’s the hidden gem or it’s the unpolished diamond…but I think it’s time we move on and make it the most it possibly can be,” Friedman said about Ventura Harbor.