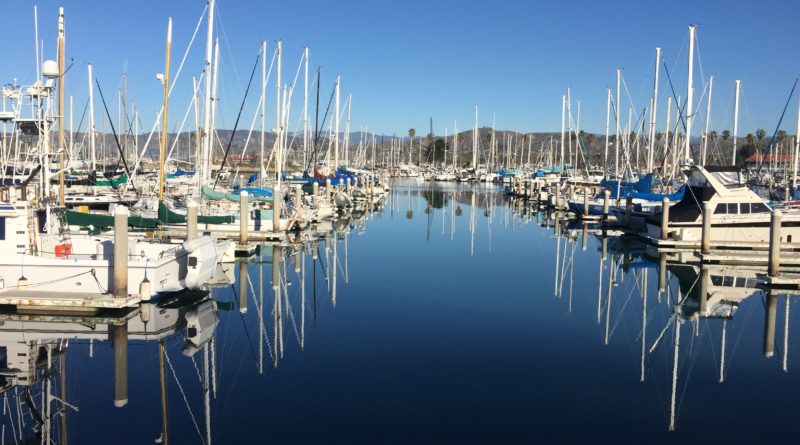 The Thomas Fires consumed local coastal cities, but boaters showed they were prepared to handle such emergencies.

VENTURA COUNTY — The Thomas Fire, which steadily engulfed areas of Southern California in flames, recently made history as the state’s worst fire ever. In an especially horrific year for California fires, many have lost their properties and more during the holiday season, a time when normally families come together in front of the fireplace, not the other way around. Ventura and Santa Barbara counties have recently experienced some of the worst damage in California.

Anthony Alcock, a British ex-patriot and author who lives aboard his yacht in Ventura Harbor, said, “The massive Thomas Fire has created enormous clouds of toxic ash and micro-particles, the distribution of which is totally dependent upon the direction and speed of the winds at any one time.  Much of it is deposited, or dissipates, over the Pacific Ocean due to the current easterly so-called Santa Ana winds.”

He continues, “Here in Ventura Harbor it is a daily crap shoot. Since it began in early December, we have had a couple of clear days and a mix of unpleasantly smoky days to downright toxic days.”

Janet Lawson, a member of Ventura Yacht Club, also commented on the poor air quality, stating, “The air quality has been horrible. Some members have left the area because of the smoke.

“Anyone with a medical condition should not be here. I have an office in the harbor and we had to close for 2.5 days because the smoke was so bad,” Lawson continued. “At times we have worn out N95 masks in the office. Depending on the wind it is either tolerable or horrible. With the wind blowing it is not so bad. When the wind quits the smoke just lays here. People who are staying have or have purchased air scrubbers.”

Despite the blazing flames, which continue to devour surrounding forests each day, Ventura Harbor has become a safe haven, a real-life safe harbor where evacuees can flock to for a barbecue put on by Ventura Yacht Club and the resilience of its citizens are determined to carry on with the annual boat parade.

Harbor Master John Higgins elaborated on the scene, where blackouts and strong winds have been major issues.

“During this time the harbor, already a place of comfort within the community began to welcome the numerous evacuee’s from the neighboring hillsides. Our Harbor Patrol Officers opened all the parking lots, provided security to the evacuees, and accommodated their special needs,” Higgins told The Log. “The first night and the nights following there were [more than] 100 evacuees in various vehicles, campers, and trailers throughout the harbor.”

Higgins proudly stated the labors to help the evacuees were overall a success.

“Our harbor takes great pride in the fact that we were able to assist in small but meaningful ways during this natural disaster,” he told The Log. “As the Harbormaster I am proud to say boaters are and have always been some of the most prepared people to handle emergencies. Boaters are taught to respect Mother Nature and preparation is the best way to adapt to its challenges. This philosophy along with the strong sense of community and family makes our harbors special within California’s communities. We would also like to thank the local marinas for opening up their parking lots and assisting the evacuees during this time.”

With the rapidly blowing Santa Ana winds, the fires have been difficult to contain and began spreading to Santa Barbara.

When asked about the status of the harbor in Santa Barbara, Harbor Operations Manager Mick Kronman told The Log, “We cancelled the Dec. 10th Parade of Lights. [There is] lots of smoke and ash, some electrical interruptions, but no physical damage to speak of. Keeping Stearns Wharf wet with saltwater wet-downs.”

The Thomas Fire surpassed the record as the largest fire in history, which was previously held by the Cedar Fire. Effecting areas in San Diego County in October 2003, the Cedar Fire burned over 273,000 acres of land.

During the Thomas Fire, the state of California spent $110 million fighting the fires in what has also been a record year for firefighters dispatched. Firefighter Cory David Iverson, 32, was a victim of the fire.

In response to the disaster, United Way of Ventura County and United Way of Santa Barbara have combined to create a joint fund with 100 percent of the proceeds going to the victims of the Thomas Fires and American Red Cross in the region. If you are interested in donating or receiving updates on how you can volunteer, visit the website unitedwaythomasfirefund.org or call 805-485-6288.