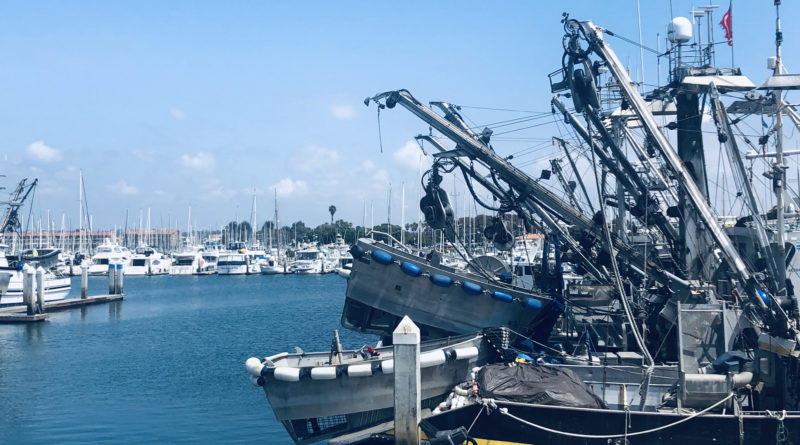 Upgrades to marina area will allow for increased commercial activity.

VENTURA—Boaters along the southern edge of California’s Central Coast should be prepared to see a few major changes during the next few weeks and months, as Ventura Port District is moving forward with a multi-million dollar upgrade of the docks at Ventura Harbor Village Marina.

Port district staff announced work on the Ventura Harbor Village Marina Dock Improvement Project would begin in mid-May, allowing the harbor to expand its commercial fishing operations. The anticipated budget is $4.5 million, with upgrades being made to utilities and infrastructure of the dock systems.

Ventura Harbor also has a large recreational boating presence, meaning boaters, anglers, commercial fishermen and other watercraft users will have to work a little harder to maintain a fluid co-existence. The harbor is also one of the largest markets for California squid.

The port district’s announcement of the dock improvement project comes on the heels of improvements made at the local Fish Pier. Ventura Port District specifically spent $500,000 on resurfacing the Fish Pier, among other improvements; the pier, according to port district staff, is an “essential offloading facility for large and small commercial fishermen.”

“Commercial fishing is vital to the local economy. In April, the Ventura Port District invested $500,000 into the resurfacing of the Fish Pier and other improvements of the essential offloading facility for large and small commercial fishermen,” port district staff stated. “Next, an extensive Ventura Harbor Village Marina Dock Improvement Project will increase the availability of larger slips.”

Completing upgrades of the Fish Pier and commercial docks, port district staff stated, are consistent with the agency’s goal of “positioning the harbor marina as a world-class commercial harbor.”

Other infrastructure improvements call for the replacement of “environmentally unfriendly” foam dock floats and upgrades of electric pedestals at each slip. The foam dock floats would be replaced with concrete docks.

Ventura Harbor, according to port district staff, is “one of the most active commercial fishing ports between San Pedro and Morro Bay.” The port district balances multiple interests: boaters, fishermen, residents, visitors and other watercraft users. The small-craft harbor occupies 274 acres and serves several commercial and recreational uses; it is also home to the Channel Islands National Park.

Fishermen have been using the harbor regularly for nearly 50 years now, offloading a variety of species such as crab, halibut, lobster, prawn, sea bass and, of course, squid. The harbor’s marinas are also home to a large liveaboard population.

The harbor is owned and operated by Ventura Port District, which the National Oceanic and Atmospheric Administration (NOAA) described as “an autonomous political subdivision of the state of California.”

A 1979 NOAA study of the harbors in Ventura and Santa Barbara counties revealed Ventura Port District intended to strike a balance between commercial and recreational interests.

“Plans are being made by the Port District to assure the accommodation of both recreational and commercial fishing vessels in the future development of this harbor,” NOAA staff stated in a 1979 analysis of Ventura Harbor.

Meetings were held in 1978 to determine whether Ventura Harbor could be a destination for commercial fishing interests, and local administrators began working on a plan to give the port district the tools it needed to compete with other ports.

“Ventura Harbor has excellent potential to serve the needs of a developing commercial fishing industry. With the recent placement of new moorings for commercial fishing boats and additional space available for transient vessels, fishermen are now using the harbor and gaining experience with the entrance,” NOAA’s 1979 study of Ventura Harbor stated. “Growth of the industry in this harbor may be slow until larger ‘market fish’ buyers or processors establish operations in the Ventura area.

“With the exception of sea urchin, anchovy and squid processed in Oxnard, large amounts of fresh fish and shellfish must be shipped to Santa Barbara, Los Angeles or San Pedro for processing,” NOAA staff continued.

Ventura Harbor is not a natural port or harbor; its entrance must regularly be dredged in order to allow boats to go in and out. The harbor’s entrance experienced a major shoaling event in early 2016, severely limiting the commercial fishing fleet. Boaters were also limited, as they were not allowed to navigate in and out of the harbor.