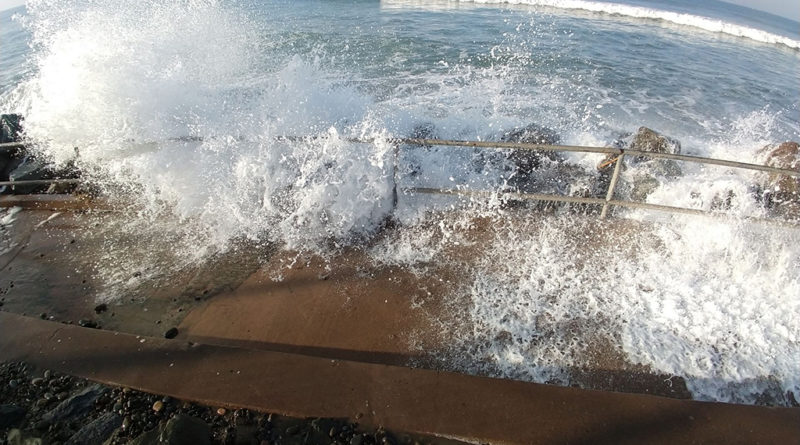 King Tides are the highest high tides of the year and the California Coastal Commission has been using them to paint a picture of what the coast could look like during major storms or if the worst of sea level rise projections become reality.

DANA POINT—The latest round of King Tides hit California Feb. 8 and 9, bringing some of the highest high tides of the year. Impacts vary up and down the coast. In Dana Point, where the Ocean Institute hosted a Capture the King Tides Nature Walk on Feb. 8, water level in the harbor inched towards spilling over and many beach faces were reduced.

The California King Tide Project was launched in 2010, collecting photographs from volunteer citizen scientists of the natural event to see how the ultra high tides impact homes, roads, harbors, beaches, wetlands, seawalls, and public access to the coast.

A King Tide is a non-scientific term used to describe exceptionally high tides. King Tides are about a foot or two higher than an area’s average high tide and typically occur during a new or full moon.

During King Tide events, volunteers interested in participating as citizen scientists photograph the coast during the highest point of the tide and upload the images to the California King Tides Project website.

“These citizen science photos help us create a record of changes to our coast that can be used by scientists, policy makers, educators, students, and the general public,” Frankel said.

The project is not just local to California, it is global. The first of King Tide Project involving the public began in 2009 in Australia. The idea has since spread to more than a dozen coastal states in the U.S., British Columbia, New Zealand and beyond.

Some cities and organizations, including Ocean Institute in Dana Point and the city of Oceanside, host organized events.

“This season there were also more than 50 local events that people could join, which is a growing element of the project,” Frankel said.

Ocean Institute held events during the most recent King Tides on Feb. 8 and 9 and Jan. 10 and 11. On Feb. 8, Kelsey Reimer, Ocean Institute Compliance Liaison, and two interns led a group of citizen scientists to Dana Point State Marine Conservation Area to see and document how tides impact the local coastline.

“Just over the years in general I think more and more people are starting to contribute to citizen science,” Reimer said. “I think part of that is people wanting to understand the things that they are told.”

Outside of occasional flooding from storm runoff, flooding is not usually a major problem for Dana Point, but there are some areas in Southern California where flooding is more common.

“You have Newport that experiences extreme flooding at times, Malibu that had its complete beach face wiped out at one point,” Reimer said.

A potentially higher water level is something many cities are taking into account when planning future coastal or harbor developments as well as policies.

“They’ll use these photos – government agencies and scientists – to say here are the flood factors and how they’re increasing over time or changing over time and how we need to combat that,” Reimer said.

As part of the Budget Act of 2016 for the state of California, $3 million was approved for the Coastal Commission to fund updates to local governments’ Local Coastal Program, with special emphasis on addressing the effects of climate change and sea level rise. Many Southern California cities were awarded funds through this to complete a Sea Level Rise Vulnerability Assessment. The assessments evaluated and modeled sea level rise scenarios in conjunction with other coastal flooding factors, including storm waves. Many cities are now using the results from those assessments to develop adaptation plans and policies.

Some of the photos collected through the California King Tides Project have been used in reports about coastal vulnerability to sea level rise, such as these.

The photos taken from this year’s King Tides, so far Jan. 10 and 11 and Feb. 8 and 9, will be uploaded onto an interactive map, a new feature of the project piloted last year.

“Last year we had 800 photo submissions and we have already surpassed that number this year,” Frankel said.

Photos collected from previous years, 2010-2018, are in an online album on Flickr. A link to the photo map and Flickr album can be found at coastal.ca.gov/kingtides/.

Correction: An updated version of this story reflects the correction that the California King Tides Project was not started by the California Coastal Commission.