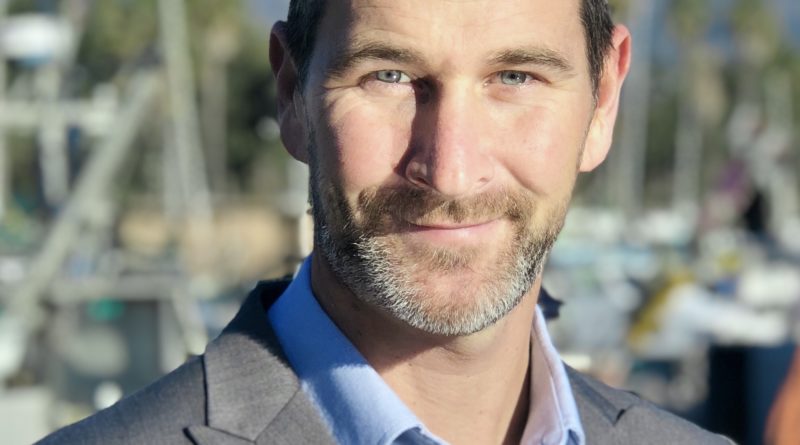 Mike Wiltshire, who was appointed the Santa Barbara Waterfront Director in January, shared his background and vision for the bustling waterfront and harbor area.

SANTA BARBARA—Santa Barbara’s new Waterfront Director Mike Wiltshire has been on the job for just a little more than two months and said the role is feeling more like home every day.

The City Council approved the appointment of Wiltshire in mid January. He replaced Scott Riedman, who retired in August 2019 after holding the position for eight years.

Wiltshire has spent his whole life by the water, fostering a love for the ocean and marine environment at a young age.

“There really is something unique that brings people to the waterfront and keeps them here and that’s sort of baked into my DNA,” Wiltshire said.

He grew up in British Columbia, Canada, on Bowen Island – a small islet off the coast of Vancouver. He took a boat to school every day and worked his first job at Union Steamship Marina. He docked boats, filled the bait tank and did whatever else was needed at the marina.

“I sailed, fished and dove with my father and just grew up on the ocean on the island there,” Wiltshire said.

He went to college in British Columbia where he earned a degree in mechanical engineering. He went on to work for 15 years in the private sector in the offshore oil and gas industry in the Santa Barbara Channel and Indian Ocean – sometimes spending months at sea. He also worked for five years with the Navy out of Port Hueneme, Point Mugu and San Nicolas Island, managing infrastructure and energy projects.

In 2007, he returned to Santa Barbara and school, earning a master’s degree in business economics from the University of California, Santa Barbara.

Most recently, he worked in the City of Santa Barbara’s Public Works Department, spending six years as the Facilities and Energy Division Manager. There he oversaw the maintenance and planned upgrades for a variety of public buildings and facilities serving the public works, police, fire, parks, recreation, and library services.

He said he saw the opening in the Waterfront Department and said it was an area he’s always been drawn.

“I think it was just a really good opportunity and a really awesome two-way fit,” Wiltshire said.

As the waterfront director, Wilshire oversees the operations, maintenance, fiscal management, and long-term capital planning for the Santa Barbara waterfront, including the harbor and Stearns Wharf with a staff of almost 50 employees and a $16 million operating budget. He said he loved the scope and scale of the operations from the capital projects and maintenance to the businesses and tenant management.

The waterfront has a prosperous fishing industry, a busy harbor, beaches, shopping, restaurants and tourist attractions. The waterfront also has a rich maritime history and is home to the oldest working wood wharf in California – Sterns Wharf.

Wiltshire said he wants to ensure the waterfront holds its culture and character from the past while continuing to be relevant and vibrant.

“My goal for the long term is to really make sure the waterfront in Santa Barbara is a premiere place to work, play, visit and conduct business,” Wiltshire said.

He said right now, he sees no glaring need for wholesale change, noting the waterfront has been really well run.

“Change for the sake of change is not my style,” Wiltshire said. “There’s a lot that’s really, really well run. The waterfront in general is an awesome operation under really great staff.”

Wiltshire said the one thing he hopes to do is evolve to stay relevant and vibrant.

“I want to ensure the waterfront operation evolves with the community and all the people and industries that we serve to make sure that we remain vibrant while hanging on to our culture,” Wiltshire said.

He also said since the waterfront does not utilize tax payer dollars – the entire operation relies on the dollars received from the services the waterfront provides – treating it like a business is important to its success.

“Being business-minded is key,” Wiltshire said.

As the waterfront director, Wiltshire will also be in charge of finding a new harbor operations manager, to replace Mick Kronman, who retired in September 2019 after holding the position for almost 20 years. Wiltshire said he plans to start recruiting for the position in the coming weeks.

Outside of work, Wiltshire enjoys the waterfront himself alongside his wife and 6 and 4-year-old sons.

“We love the beach, love the ocean, I surf, I dive, I get out on the boat as much as I can,” Wiltshire said.

Wiltshire said he does not currently own a boat, but used to co-own a sailboat with a friend and hopes to own a boat again in the near future.