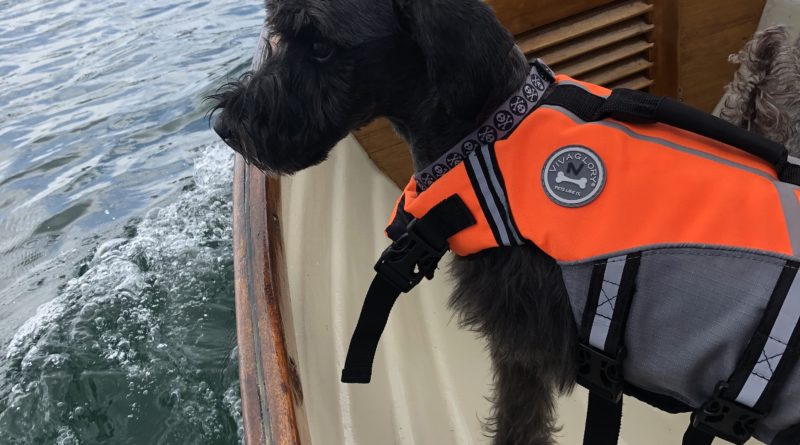 Dog Aboard might just be one of the most popular departments in our entire paper – which is why we’re giving our readers more this issue!

If you have a fellow furry sailor who would like to be featured in an upcoming issue of The Log, email photo files to editor@thelog.com. Photo submissions via postal mail can be sent to 18745 Bandilier Circle, Fountain Valley, Calif. 92708. 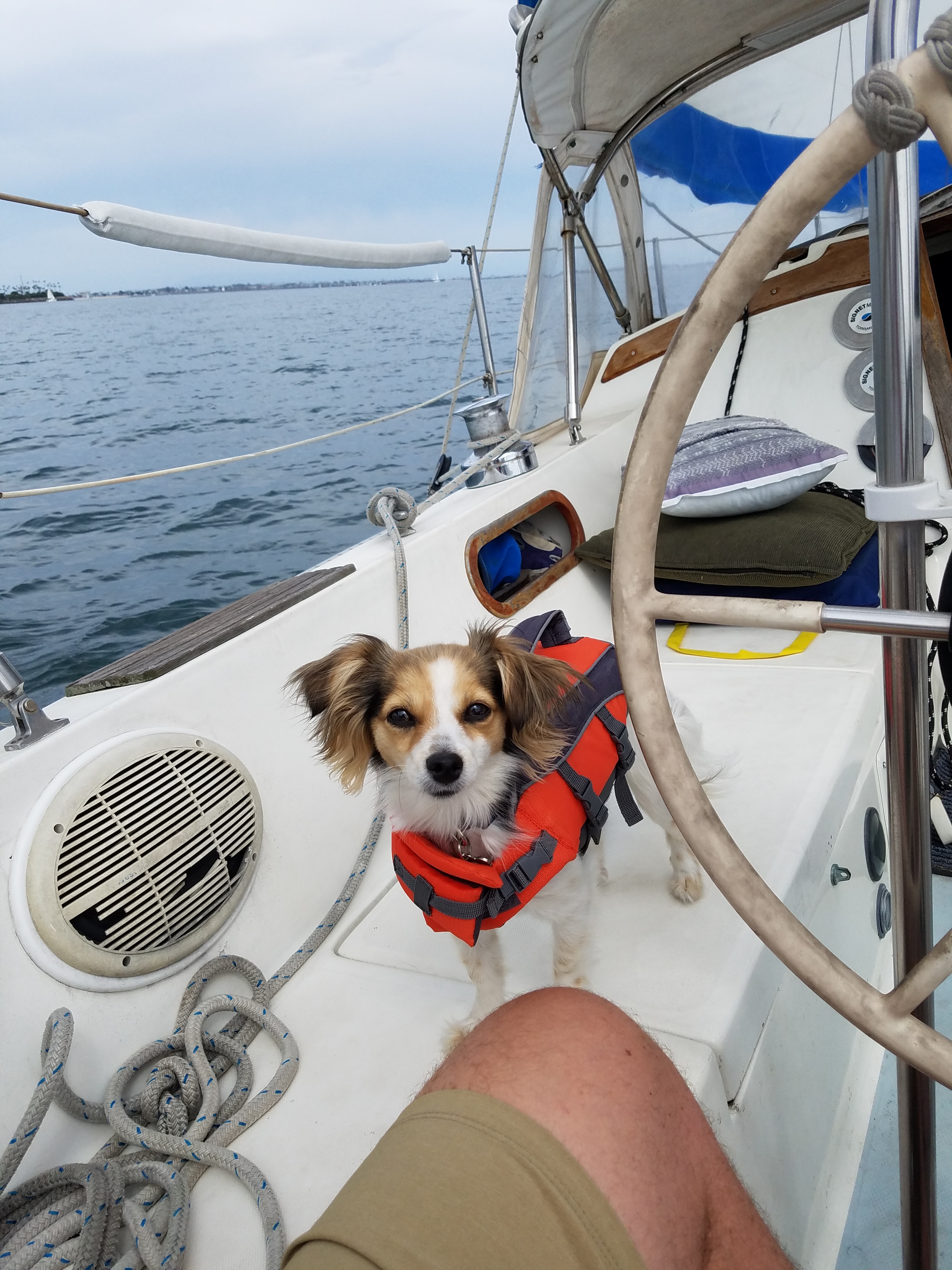 Safety First
Bella, who obviously captures a sailor’s spirit, loves to cruise the Long Beach waters. She even wears a life vest for added safety measures!

Bodhi the Sailin’ Aussie
Not much was said about Bodhi, the miniature Aussie, but it looks like he’s enjoying his time on the water! 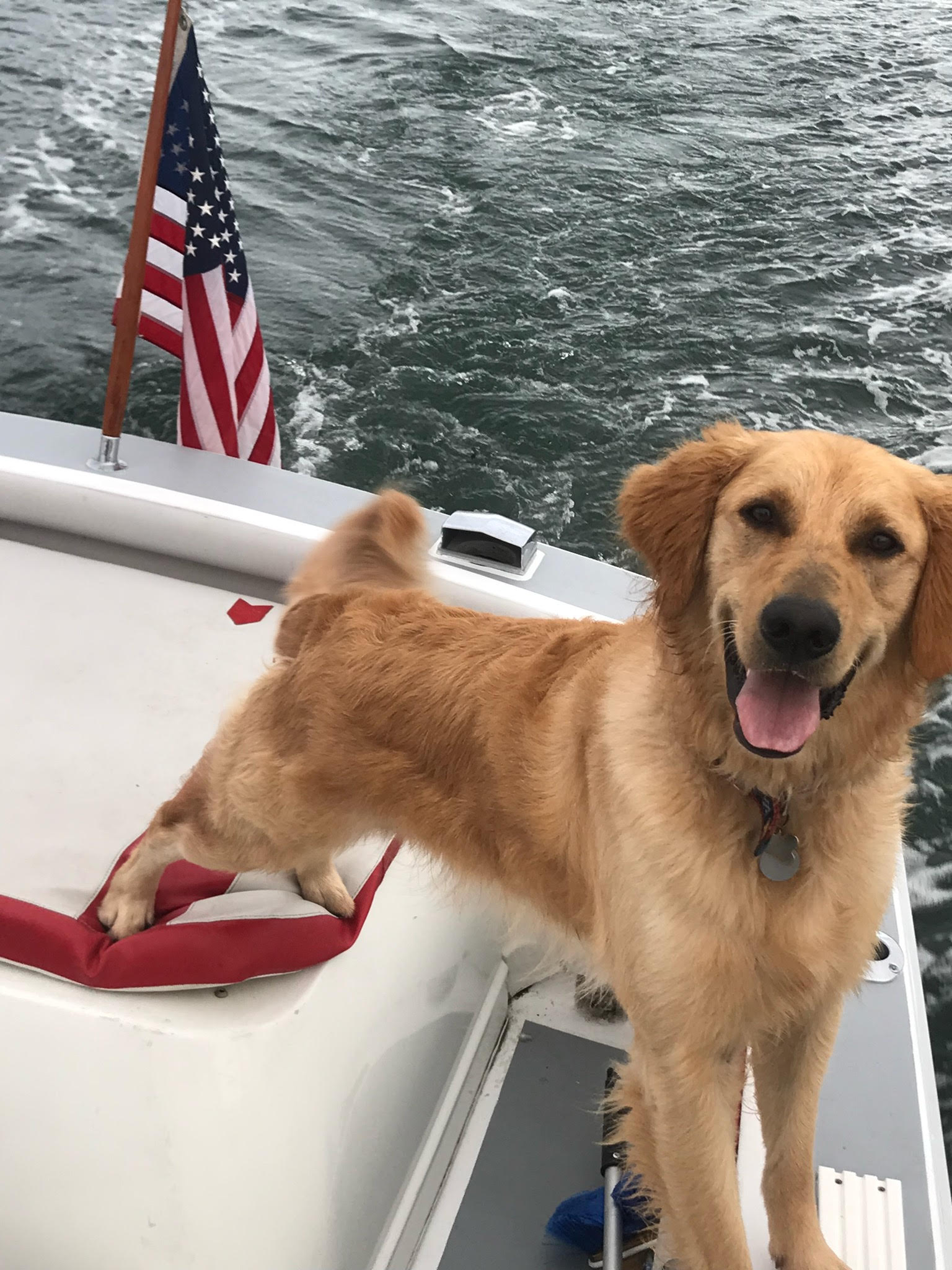 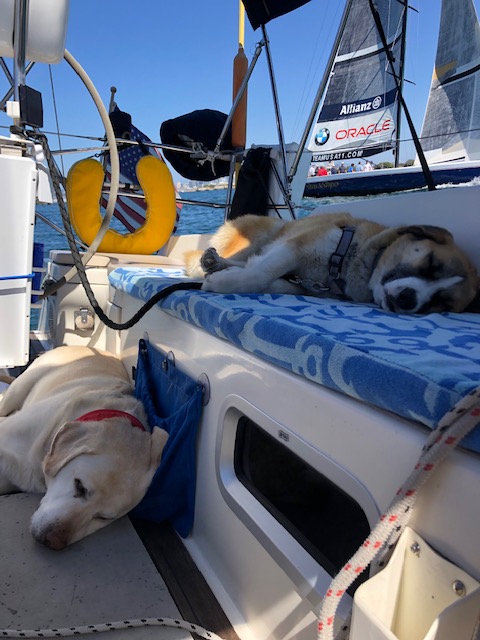 Nappin’ Aboard Shooting Star
Jeff Taylor of Silvergate YC sent in this photo of Tanner and Devan on Shooting Star, a 37-foot Hanse, in San Diego Bay. Taylor said, “This was Devan’s first time sailing and he clearly is very relaxed!” 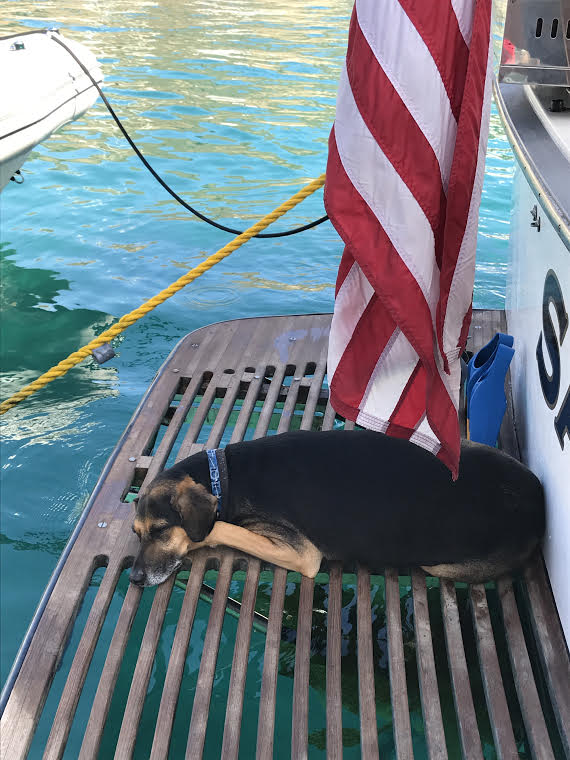 Chillin’ in Cherry Cove
Cindy Vanderspek submitted this photo of Hobie and said, “Hobie, an 8-year-old Black and Tan American Coonhound, napping on the swim-step of his owner’s Bertram 50 on a beautiful afternoon in Cherry Cove, Catalina.” 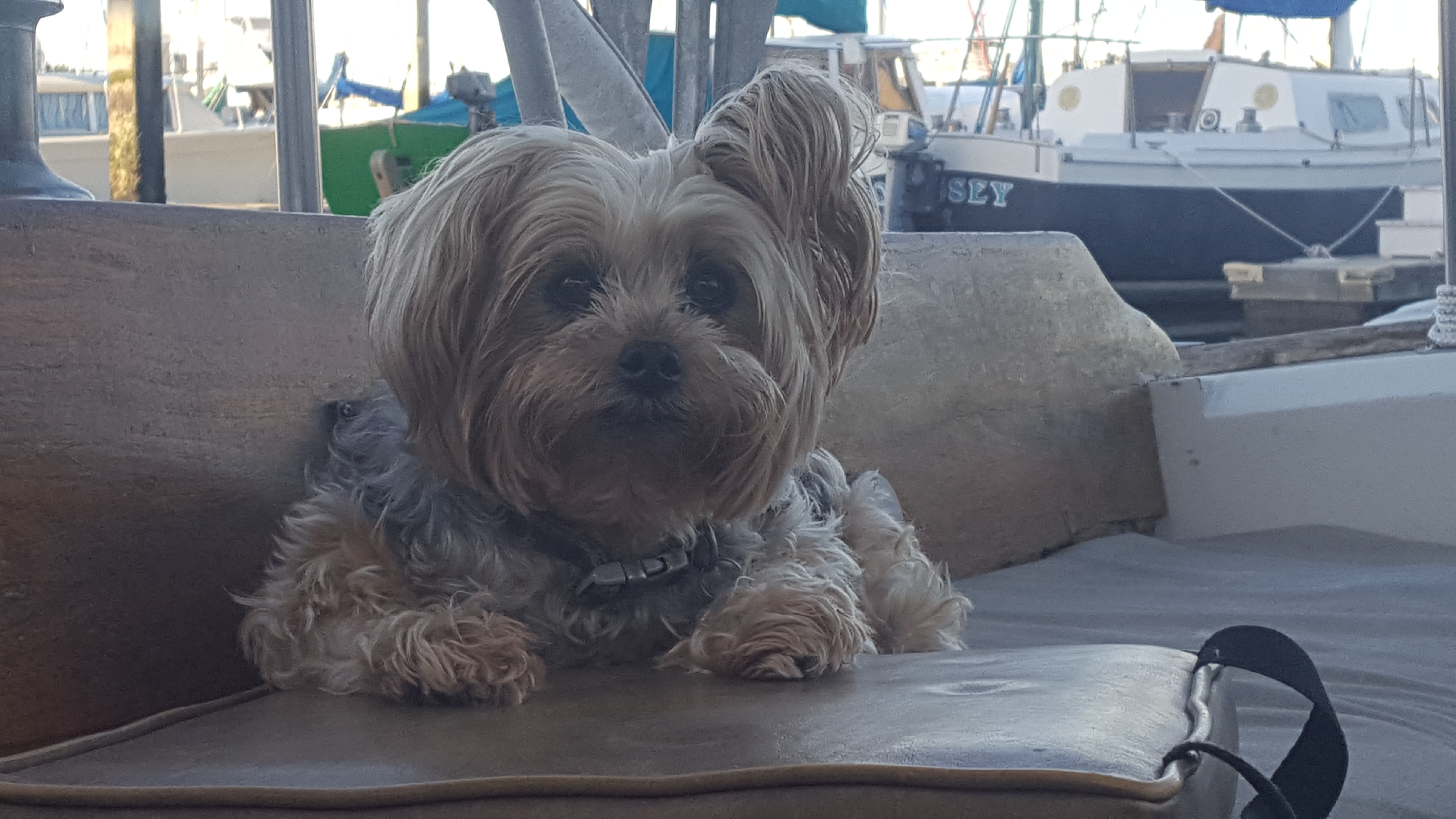 Maxine the Liveaboard
Maxine loves her liveaboard lifestyle at Ventura West Marina. Don Hendricks, her boat-mate, said, “Maxine is a 15-year-old Yorkshire terrier who has been a boat dweller for the past 10 years. She loves the boating life, her favorite thing is watching the dolphins on the way to Santa Cruz Island. She lives on a 30ft Islander Bahama, Windrose.” 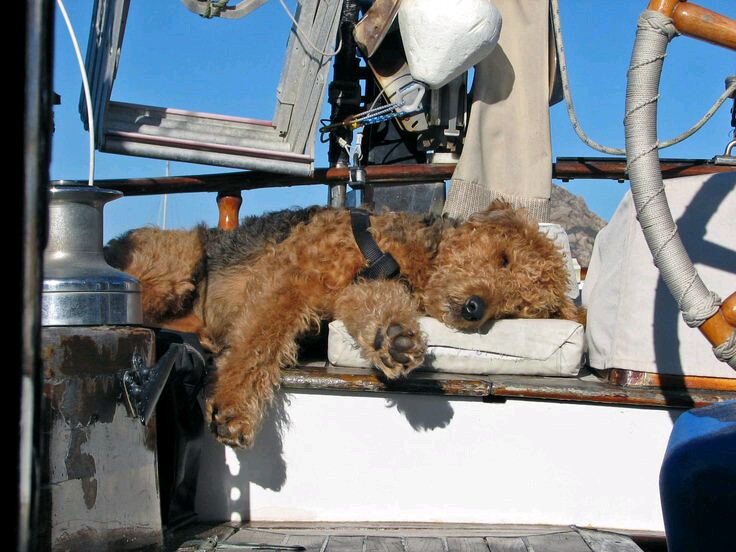 Fair winds, sweet Milo!
Drew Jacobson submitted a photo of his sea-faring companion, Milo, in Morro Bay. Jacobson said, “Although no longer with us, our Airedale, Milo, loved to lay about during trips to Catalina Island.” 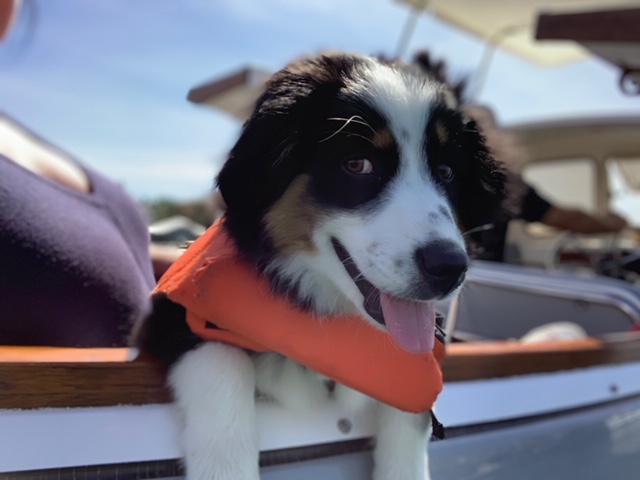 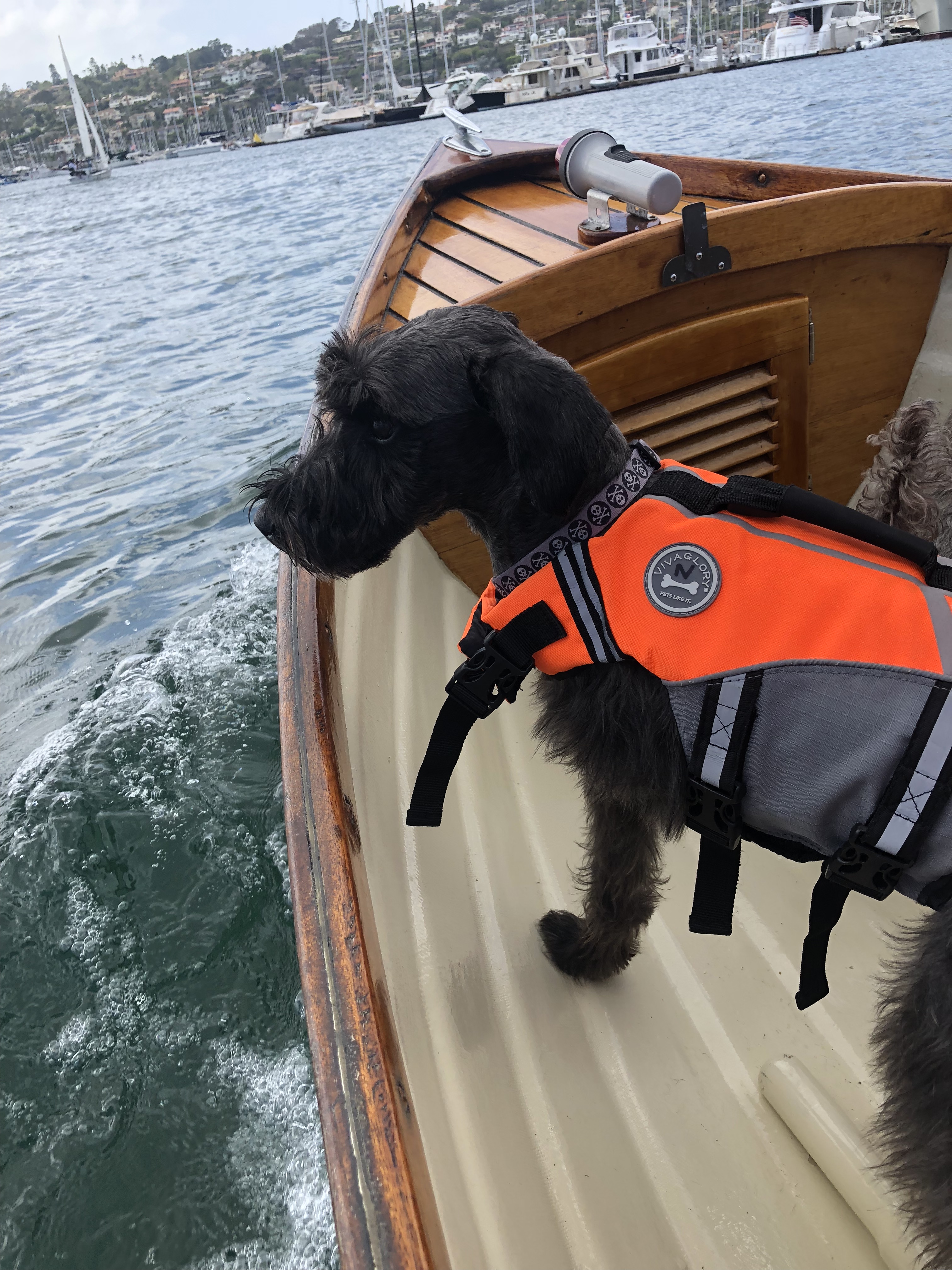 Nelson the “Tri-Pawed” Sailor
Kat Endert says, “Nelson, a “tri-pawed” rescue taking a spin in a vintage dinghy boat shopping for his next powerboat out in La Playa.” 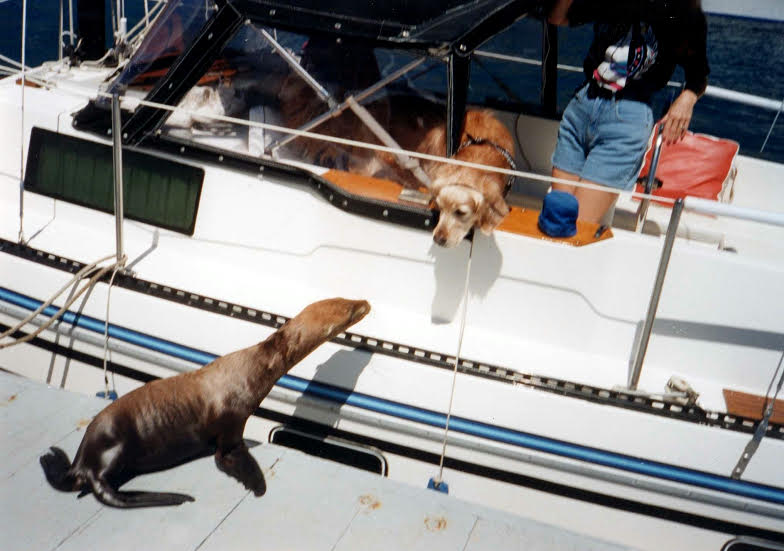 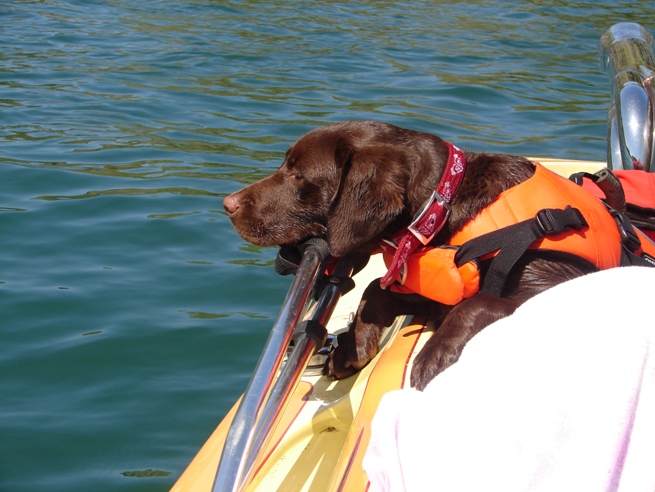 Ruger’s Good Fortune
Not much was said in this submission, but a caption stated, “Ruger loves to be at the helm of Good Fortune.” Don’t we all! 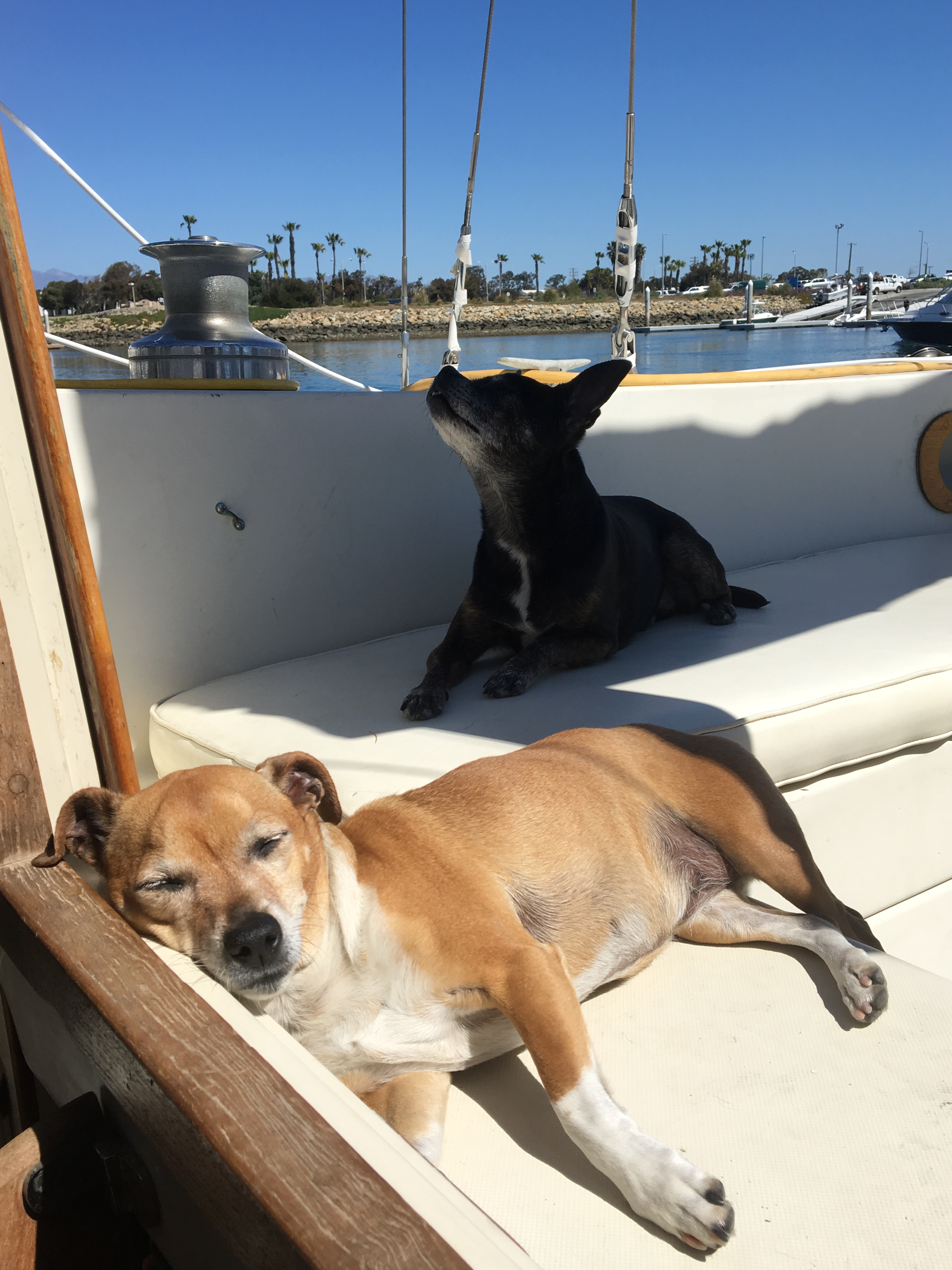 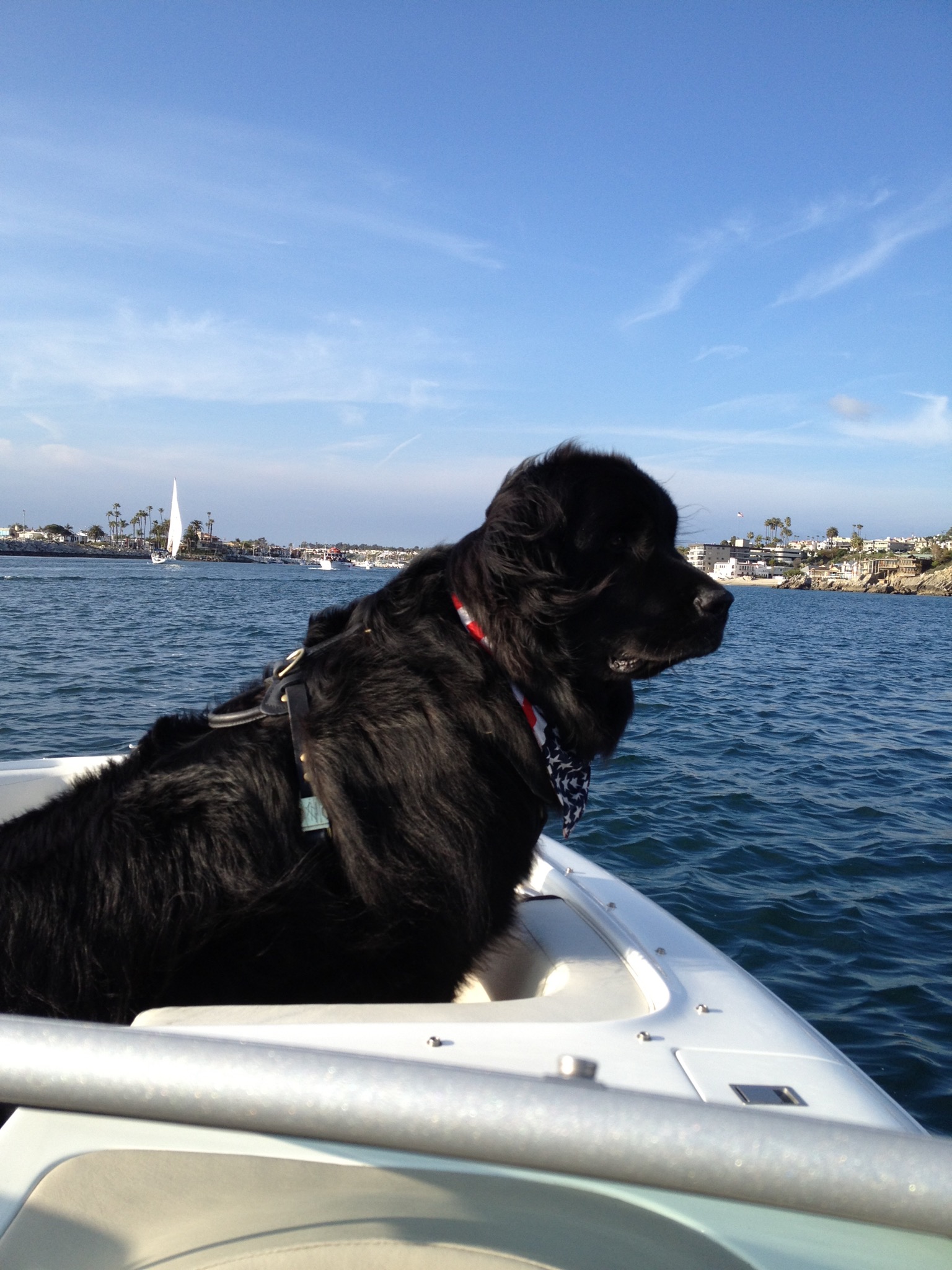 Tugboat at the Bow
Tuboat’s owner said, “Tugboat our Newfoundland on the bow in the Newport jetty in our open bow Cobalt.” 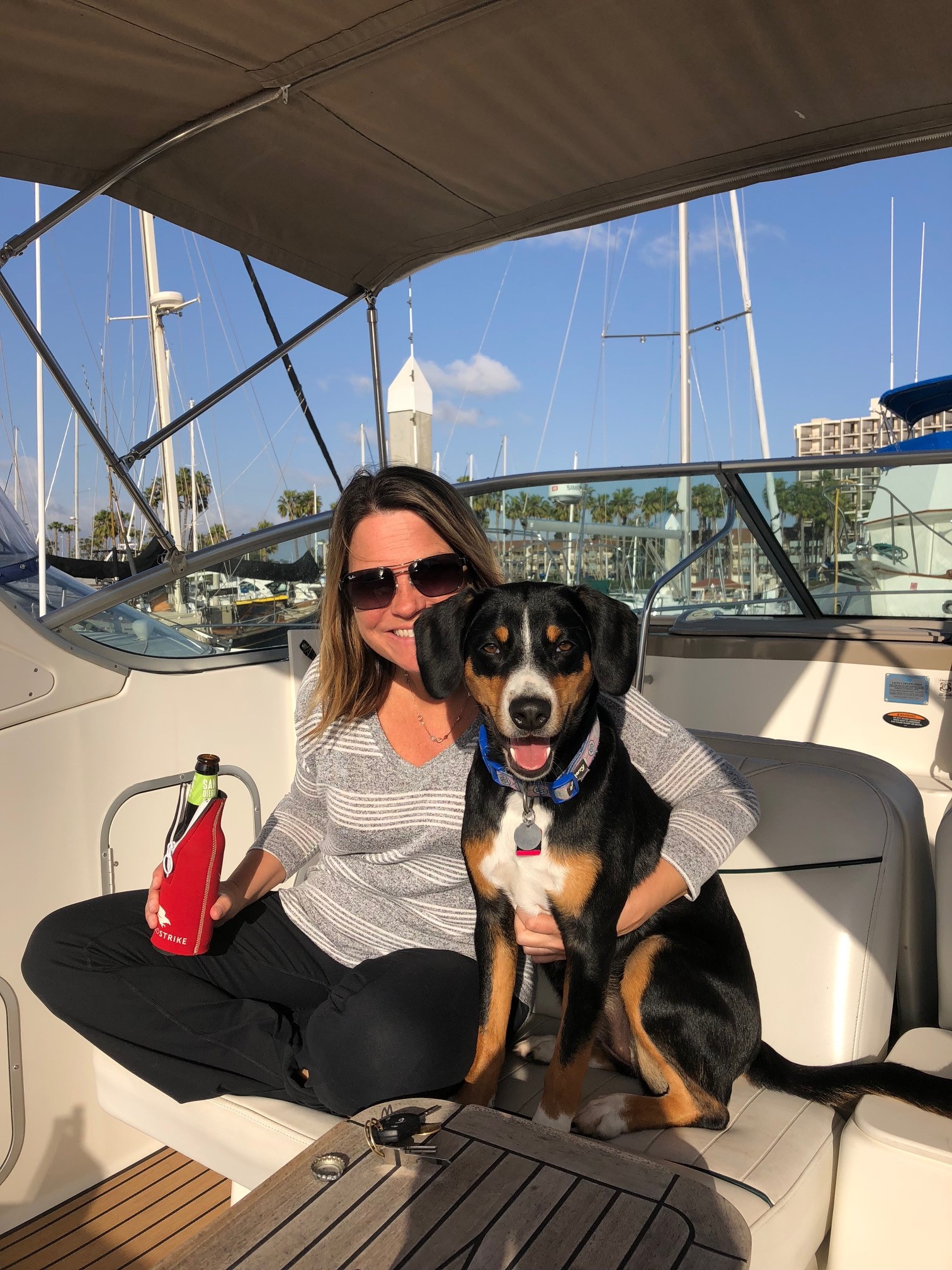 Rozzi the Outdoors-dog
Rozzi is pictured with her mama Katie. Chris Kelly, Rozzi’s dad, said, “Though she’s a mountain dog, she loves the boat!” 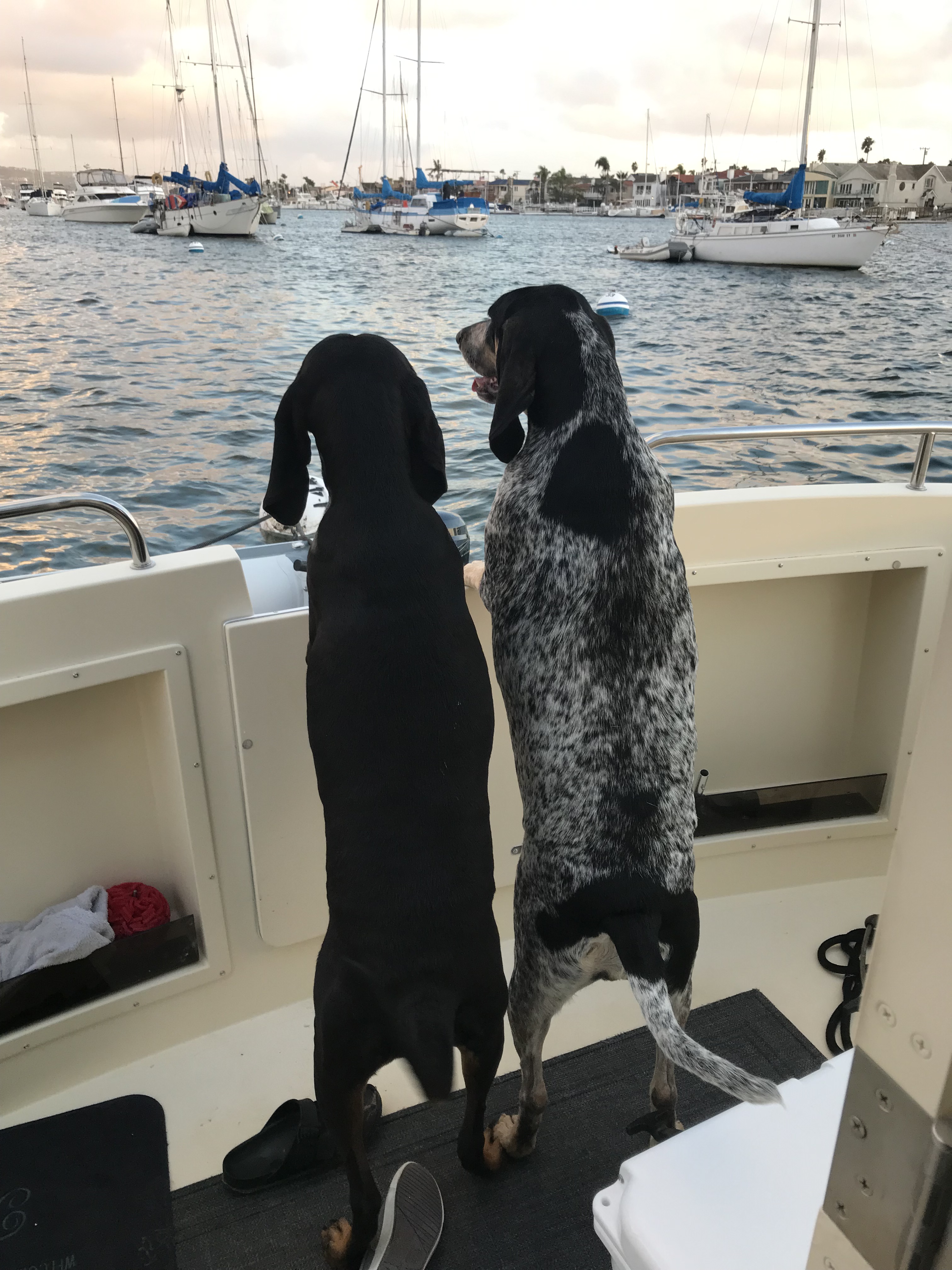