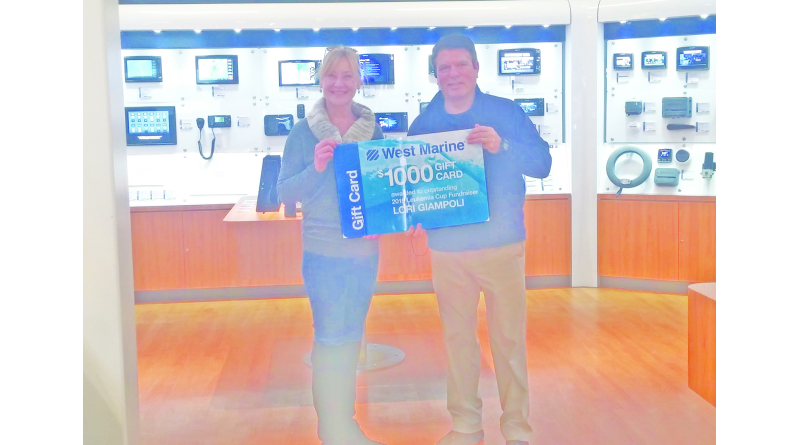 WATSONVILLE — West Marine has awarded Lori Giampoli of Geneva, Illinois, a $1,000 shopping spree in recognition of her outstanding fundraising efforts on behalf of the Leukemia & Lymphoma Society’s Leukemia Cup Regatta series in 2015.

Giampoli was selected from Leukemia Cup Regatta participants throughout North America who raised at least $500 or more last year and were entered in a drawing to win the $1,000 shopping spree donated by West Marine, a longtime supporter of the regatta series. Giampoli, together with the crew of her family’s sailboat, Jahazi, raised more than $38,000 during the 2015 Columbia Yacht Club Leukemia Cup Regatta in Chicago. Over the years, Team Jahaz  has raised nearly $425,000 through its participation in the Columbia Yacht Club Regatta series.

“Lori’s hard work benefits a worthwhile cause that West Marine has supported for years, and we’re proud to offer her this $1,000 shopping spree to say thank you for all she’s done to contribute to the Leukemia Cup Regatta further ongoing cancer research efforts,” said Deb Radcliff, West Marine senior vice president of marketing

The Leukemia Cup Regatta is a series of sailing events that combines the joy of boating with the important task of raising money to fight leukemia, lymphoma and other blood cancers. Participants have raised more than $54 million to help advance the LLS mission since the regatta series’ inception.