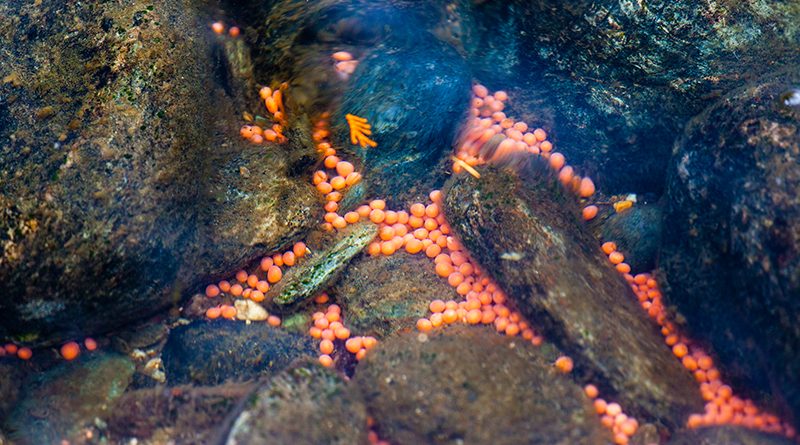 Salmon lay their eggs in multiple streams and rivers. Depending on the species, a female salmon will lay anywhere from 1,500 to 7,000 eggs in a nest or redd she has created by making a shallow depression in the stream bottom. The male fertilizes the eggs, and then both fish push gravel over them to protect them. Shutterstock image.

If you’re heavily involved in the fishing industry, you may have heard the term spawn or spawning, but do you know exactly what it means? Spawning is fish mating and producing offspring. Here is a breakdown of spawning and how it affects the fishing community.

Spawn is used to describe the process of how to mate fish and reproduce. It is very different from the usual ways of reproduction that mammals have. While fish have a spawning season, humans can also induce the process.

If you’re an avid angler and don’t know about fish spawning, that’s normal. However, if you don’t know, you should learn more. A fish’s behavior switches when they’re spawning. Knowing when your target fish is spawning and how it changes its behavior can help you modify your methods for a more successful fishing trip.

Most fish follow specific spawning patterns, although that pattern changes in each particular type of fish. Many move locations when laying their eggs or give birth in special places or by specific underwater terrain for protection. Some fish, like salmon, are almost always caught during their spawning season.

Understanding when fish spawn will make you a better angler, and you can either anticipate and avoid the spawning season or use your knowledge to catch spawning fish when they change habitat.

In addition, some fish are also known to become highly territorial before they spawn, often pushing each other out of their prime habitat. For example, fish on spawning gravel have been observed picking up sculpins, shaking them, and spitting them away from the area. Biologists believe this is to protect already existing redds from predation or to evict them from the area a fish may want to dig. A redd is the general location selected by a female for laying eggs. The interesting thing about this observation is that the fish (trout were observed in this case) do not eat the sculpins when this takes place. Instead, they do it to kill them or get them out of their territory.

Although the concept of spawning is the same for all fish, there are some differences for different types of fish. Those distinctions include the time of the year, the age of the fish participating, and their behaviors when spawning. In addition, different types of fish have different strategies when it comes time to spawn, and they have to worry about other threats.

Fish reproduce in one of three ways. They can reproduce by livebearing, spawning, or by themselves. Livebearing is similar to the way mammals reproduce. Some fish can even switch their gender, which means they can go through the entire process independently. But, the most common way for fish to produce is by spawning. Spawning happens when the female lays her eggs in the water. The male will then come and fertilize as many eggs as he can. This can also be done when a person holds the pregnant female and slowly rubs one hand down the belly of the fish, forcing all the eggs out and “squirted” into a container. Next, the person grabs the male and makes the same motion down the center of the fish’s belly, extracting the male’s “milk” and combining it with the female’s extracted eggs, causing fertilization.

Whether or not a fish lays eggs depends on the species of fish. Some fish birth live fish, while others lay eggs. Females laying their eggs for the males to fertilize is the most common form of reproduction among fish. The female fish can leave anywhere from a few hundred to thousands of eggs.

So, before your next outing to the lake, river, or ocean, research your target fish to understand their spawning season before you get out on the water. The more you know, the more fish you can catch. In addition, since spawning can drastically affect a fish’s behavior, learning when and how they spawn can improve your success while fishing.