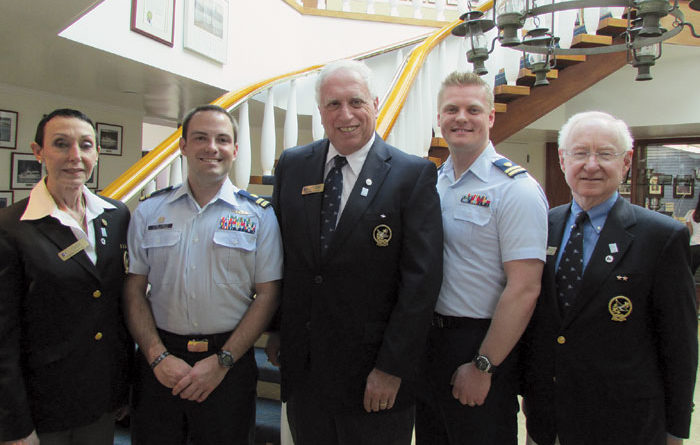 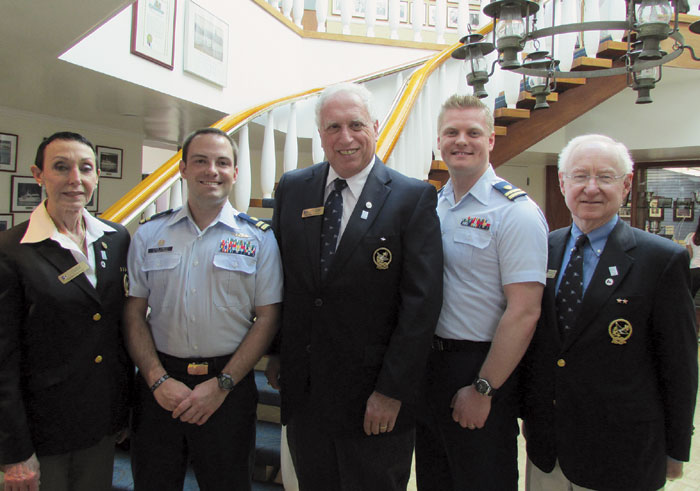 MARINA DEL REY — After boaters up and down the coast of California experienced after-effects of the earthquake and tsunami that devastated Japan’s coastline in 2011, many began asking the Coast Guard how to prepare for any possible future natural disasters of this kind. Tsunamis can happen here — and knowledge of what to do in such an emergency is empowering.

At a luncheon hosted by California Yacht Club, Lt. Steward Sibert, commanding officer of the Coast Guard cutter Halibut; and Lt. Sean Arumae, command duty officer for Coast Guard Sector Los Angeles-Long Beach; provided helpful information for boaters on how to stay safe during a tsunami — on and off the boat.

“One of the biggest mistakes people make when a tsunami hits is to head to the harbor to check their boat,” Lt. Arumae said. “It’s a natural impulse.”

But it’s important to fight the urge to run to the boat, he added. Those who go down to take photos, stay with their vessel or decide to fish off a pier are the ones who most often get hurt.

“The best thing you can do when you leave for the day is to make sure you tie your vessel’s lines securely,” he said. “Do whatever you would normally do for moderately heavy weather.”

Boaters at California YC listened intently to the presentation, jotting down important things to do, in case of a tsunami.

Lt. Arumae instructed the crowd to follow directions provided by local fire departments and check the National Oceanic and Atmospheric Administration (NOAA) website — noaa.gov — for tsunami updates and alerts. He also advised people on land to get to a location that is at least 100 feet above sea level.

For boaters who prefer to get under way and out of the harbor, having enough time to get out of the way of a tsunami is essential.

“My personal opinion is, there is absolutely nothing wrong going out to sea if you have enough notice,” Lt. Arumae said. “If you can see that you have eight hours before it hits, that’s one thing. But if you’re looking at an hour or less, we wouldn’t recommend getting your boat out.”

While it’s a good idea to be clear of the harbor before the tsunami hits, mariners need to be aware that if their cruise is not timed correctly, they could be stuck in harbor vessel traffic as other boaters also try to escape. In a worst-case scenario, if the tsunami hits, boats could be tumbling over each other.

Boat owners can track how much time they have to get out on the water safely by visiting the National Weather Service (weather.gov) and the Pacific Tsunami Warning Center (ptwc.weather.gov) websites. Both sites prepare lists of where and when a tsunami is expected to hit.

Lt. Sibert advised boat owners to consider a variety of potential scenarios, if they choose to stay on their boat rather than head inland.

“My biggest concern is ‘where are we going to tie up when we get back?’” he said. “You have to have a back-up plan if the shore structure is devastated, so that you are not stuck on your boat for a long amount of time.”

Southern California boaters have been preparing for tsunamis since experiencing the effects of tidal surges in 2011. On March 11, harbors up and down the coast prepared for the tidal surges from a tsunami triggered by a 8.9 magnitude earthquake that NOAA anticipated would hit the California coastline at approximately 8:30 a.m. Eddies, swirls and waves destroyed piers, tossed boats and ripped vessels from moorings throughout the day.

In Los Angeles County, three docks in Redondo Beach’s King Harbor experienced damage from tidal surges and water level changes between 5 and 8 feet occurring in short intervals. The harbor was shut down to all vessels entering or leaving the harbor for 48 hours, and a voluntary evacuation was administered for the area’s 250 liveaboards.

In Marina del Rey, a few boats had to be retied during the surge.

There would be little time to prepare if an earthquake were to shake the ground off California’s shoreline, Lt. Arumae said.

“I don’t mean to scare anyone here, but realistically, if we had an earthquake less than 100 miles offshore, we would be looking at 6 foot tidal surges within 10-20 minutes,” he said. In that case, “you had better head inland.”

Mariners were also warned to be prepared for debris from the 2011 Japan tsunami that is scheduled to be making its way across the ocean and down the U.S. Pacific Coast by this summer. More deadheads and logs are also expected to be seen floating in the ocean.