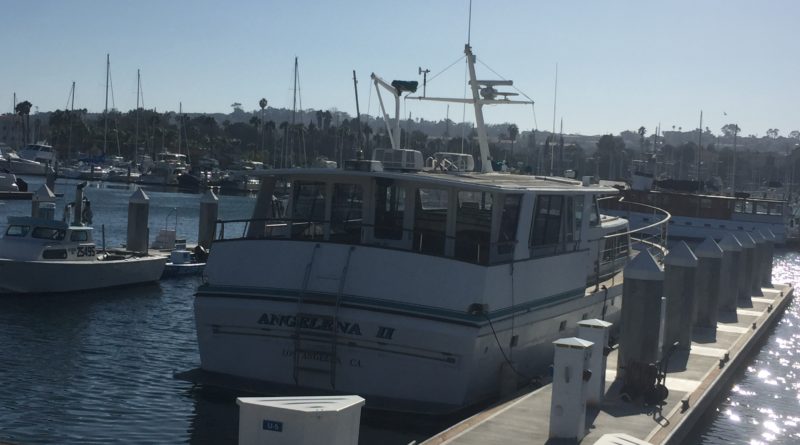 A Los Gatos firm named Pathion purchased the yacht at an auction in 2015, but what has happened since then?

LOS ANGELES — For a spell, coverage of Angelena II, the Port of Los Angeles’ pet project boat, was covered fairly extensively by The Log and other news outlets. The port district sunk $4.1 million into the yacht with plans to use it as a harbor tour vessel before ultimately selling it to a private company via auction. The yacht’s new owner had plans to showcase Angelena II as a technologically advanced vessel, potentially serving as a model of a boat of the future.

Angelena II, a 73-foot yacht, was purchased by the city of Los Angeles in 1988 for a whopping $450,000. City officials had grand plans for her. The Port of Los Angeles always imagined this vessel as becoming more environmentally friendly and, until her purchase, planned to replace the diesel engine, which no longer met California’s emission standard.

These plans never came to fruition and, in 2015, the yacht was offered for sale at an auction. The buyer was Pathion, an energy technology firm that undertook the mission to restore Angelena II as well as transform her into an energy-efficient yacht. Radio silence fell on Angelena II’s existence – until now.

Phillip Sanfield, the port district’s director of media relations, confirmed the yacht was sold via auction. He added he has no knowledge of what happened with the yachts once Pathion assumed ownership.

“I did a quick check with our Construction/Maintenance division, which was responsible for the Angelena II. It was sold through a third-party auction house. We have no knowledge of its current status, condition, etc.,” Sanfield told The Log.

The Log also reached out to Dave Hurley, Pathion’s vice president of marketing communications. He confirmed the company is making progress with its efforts to convert Angelena II into the technologically advanced vessel it hopes to build.

This is Pathion’s first-ever venture into the world of boating; trekking into the marine industry is a new endeavor for the company.

“We have the Angelena out of the water this week for hull-cleaning and repair,” Hurley told The Log. “We are heads down on some new stuff, but we won’t be ready to until [quarter four].”

In December 2015, a press release by Pathion stated they had entered the marine industry with the Marine Power Core energy system and had the intention to continue the mission of making Angelena II a clean energy vessel.

It appears Pathion, based upon Hurley’s words, will have some news about Angelena II’s progress once 2018’s fourth quarter arrives.

Angelena II has been seen docked at Cabrillo Way Marina. Port staff spent more than $4 million to convert the yacht’s original diesel engine to the hybrid-electric engine. The expenditure included nearly $3 million in labor expenses and $469,000 on materials and contractual obligations.

The hybrid engine, which was finally installed in 2012, was touted as being the first of its type, capable of reducing emissions and fuel usage by 95 percent.

The Port of Los Angeles offered harbor tours aboard Angelena II between 1988 and 2010. She was built in 1970 and operated on a pair of 350-horsepower engines. More than 4,000 people boarded Angelena II in 2011 for a harbor tour.

One thought on “Whatever happened to the Port of L.A.’s money-pit yacht, Angelena II?”