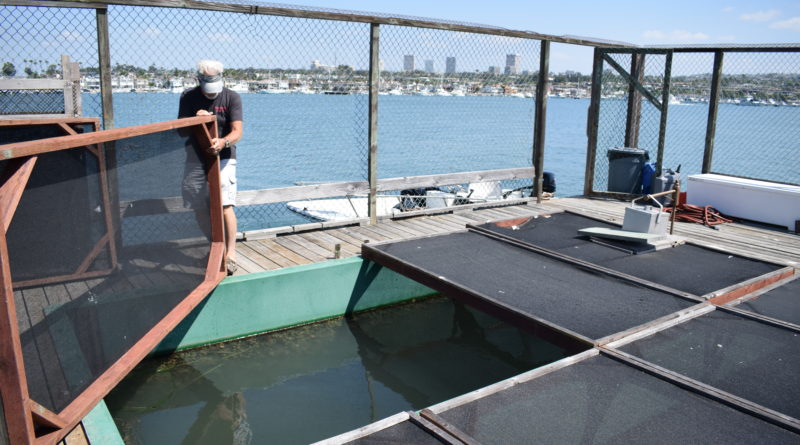 Many say white sea bass are making a comeback, but how is the success of the Ocean Resources Enhancement and Hatchery Program measured?

NEWPORT BEACH—It’s a warm Wednesday morning in September and James Updike is headed out to the Newport Beach Harbor white sea bass grow out pens. There are currently no fish to take care of, but come October or November that will change. Updike is cleaning up the pens for the next batch of juvenile white sea bass that will be raised in the harbor.

The white sea bass grow-out pens in Newport Harbor have been part of the California Department of Wildlife and Fish Ocean Resources Enhancement and Hatchery Program (OREHP) for about 30 years, according to Updike who is one of the pen managers. Updike said in a year they can raise anywhere from a couple thousand to nine thousand white sea bass that once old enough, are released into the bay.

OREHP is one of the longest-running marine fish stock enhancement pilot programs in the United States. It was created by the California Legislature in 1983 to research the feasibility of raising hatchery fish to successfully enhance wild fish populations important to California for their sport and commercial fishing value. Around that time, in 1978, fewer than 300 white sea bass were caught by recreational anglers, according to the California Department of Fish and Wildlife.

If you have a fishing license, you have contributed to the program. A special fee for a marine enhancement stamp on annual saltwater-fishing licenses serves as one of the main funding tools. Outside of the fee, most of the costs are covered by donations from local angling groups and volunteers.

Since the start of the program, more than two million juvenile white sea bass have been released into Southern California waters. Now, after a major study evaluating the program and a public comment period, there is no sign of the program ceasing.

Just how successful it has been depends on who you ask and how you measure its success. It has the support of many local anglers who fish in Southern California waters, angling groups and educators.

“We’ve proven through recaptures and stuff it has worked, to what extent we’ve contributed is really an unknown factor,” said John Whitaker, the co-director of the white sea bass grow-out program in King Harbor.

On the quantitative side of success, the latest data on the program came out in 2017. A study was assembled to evaluate the program and concluded it has made a less than a one percent contribution to enhancing the California white sea bass population due to high levels of mortality suffered by hatchery-reared white sea bass following release into the wild.

“The Department of Fish and Wildlife went out and have tried to do studies on the fish to determine how can we measure how successful this program has been?” Updike said.

The analysis went on to state that if mortality rates of released hatchery fish were reduced to equal those of wild white sea bass, then current stocking rates could result in a hatchery contribution of 18 percent.

“There’s been a lot of good research that has come out of this program,” OREHP Coordinator Valerie Taylor said.

California Sea Grant Coastal Specialist Theresa Sinicrope Talley was one of the scientists selected to evaluate the program in 2017. She said OREHP has significantly contributed to the world’s knowledge of white sea bass biology and culture, in particular the life history, ecology, physiology, basic genetics, diet in culture, common diseases and health conditions, tagging and tracking methods, and influences of enhancement on wild stocks.

“When the OREHP started, little was known about the techniques needed to successfully spawn, rear, and release saltwater fishes,” Talley told The Log in an email.

The program at its peak had 15 grow-out pens in operation along the Southern California coast. Taylor said there are now eight in operation, with several others currently not in operation due to the need for repairs and/or volunteers.

“We are currently still raising white sea bass and releasing them but there is the potential of maybe moving on to a different species, California halibut has been talked about,” Taylor said.

She said Hubbs-SeaWorld Research Institute is researching hatchery-raised halibut using private funding venues. The complete discontinuation of the program is not something that is being considered, Taylor said.

In 2018, the public was invited to participate in a survey about the future of OREHP. Of the 178 respondents, 34 percent wanted to continue OREHP with white sea bass and the addition of a second enhancement species, while 21 percent wanted to discontinue OREHP and redirect the funds to other management efforts that may help marine fisheries and ocean health, such as stock assessments.

“Every person at every one of those meetings who stood up were fisherman or educators and everyone said I don’t have any data but I’m out fishing and this is what we see,” Updike said.

“If you catch a 35-pound sea bass along the coast that’s considered small now,” Greenberg said. “The average ones are about 50 pounds.”

Of 123 public comments and post-town hall comments, 78 percent expressed distrust of the science underlying the OREHP Evaluation, while 17 percent trusted the science.

“If they can improve the collection data and all that, we’d have a better idea I think,” Whitaker said.

Other factors have played a role in the growing white sea bass population. In 1990, California voters passed Proposition 132, which banned the use in state waters of the commercial gill nets which had been taking a toll on white sea bass populations. Some, like Ocean Institute Vice President of Education Wendy Marshall, have asked the question: what was the program’s purpose?

“Was the purpose of the program strictly focused on depleted population and repopulation?” Marshall said.

Marshall is a former Director of Education at what is now Ocean Quest in Newport Beach, a hands-on science education center. During her time there, she took hundreds of kids to the white sea bass grow-out pens in Newport Beach Harbor.

“Taking kids out there to see a real-world case study,” Marshall said.

She believes from a qualitative stand point, the program has been a success, teaching and inspiring kids about ocean problems.

“There is more to measure than fish heads,” Marshall said.

She believes the program has also been successful from a community impact and research standpoint. She said one possible unintended implication from the program could be applied to the aquaculture sector.

“Can you rear this fish and do it ethically, and the answer is yes,” Marshall said.

Marshall said how to ethically and sustainably raise fish is just one of many lessons to be learned from the pens.

Just where the program goes from here is unclear. What is clear, is the support and optimism for its future. The Ocean Institute in Dana Point is among those to see a future for the program and currently has a permit pending to build and operate a grow-out pen.

“Ultimately I would like to use it as an incubator for new studies,” Marshall said.