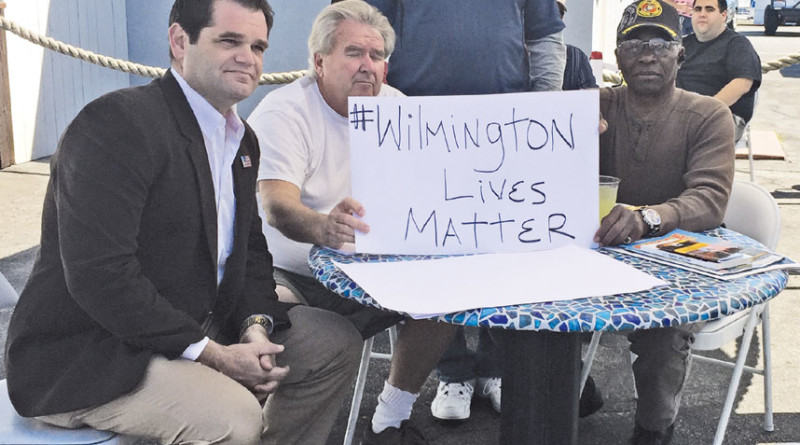 WILMINGTON — Recreational boaters at the Port of Los Angeles coined a new hashtag – #WilmingtonLivesMatter – in hopes to draw attention to damage they are allegedly suffering as a result of a recent oil spill caused by a large freighter vessel.

The ship allegedly responsible for the March 13 oil spill at a berth in Wilmington is Istra Ace, a 577-foot vehicle carrier and cargo ship. Coast Guard officials determined faulty pipes to be the cause of the incident that spilled an estimated 50 gallons of heavy fuel into the water.

Coast Guard and Los Angeles Fire Department officials responded to the spill and launched a cleanup effort, but recreational boaters claim they are still reeling from the residual damage of the disaster.

A few dozen recreational boaters met at Marina Café in Wilmington on March 25 to discuss the cleanup efforts and the potential liability of the responsible party. Two major themes surfaced: will the cleanup be handled properly and are any civic leaders paying attention to the concerns of affected boaters.

Morgan E. Griffin, who keeps his boat in Wilmington, confirmed some work is being done in the area but most boat bottoms are covered in oil.

“There is still oil in the water. Yes the port has been cleaning underneath the big docks with big pressure washers [but] there’s oil on the bottoms of three-quarters of the boats,” Griffin told The Log in an email. “We haven’t had any elected officials down here at all [but] there have been two gentlemen down here from insurance. They’re trying to reach out to the people now.”

Griffin said oil from the spill has penetrated local docks. Fumes associated with the spill have been circulating in the air, he added.

The Wilmington boater said he hopes someone would first remove oil from the docks and then clean the boats.

“We need to have somebody stand up and say, ‘We’re not going to take it,’” Griffin said.  “There are rules on the books that say we’re a working port. We’re functioning human beings with lungs. We need to head out there and nail this now. We have cancer causing stuff [such as benzine] in our water.”

Kevin Villalobos, a 20-year veteran diver, who cleans growth on the sides and bottoms of boats, said he has turned down jobs since the oil spill, worried about the potential health risks of being exposed to contaminated water.

“It’s scary,” Villalobos said. “I don’t want to get cancer but this is my bread and butter. I’ve been going hungry the past couple of days.”

Villalobos said he observed oil sheen on the water’s surface and blotches of chemicals floating around since the March 13 oil spill.

“It’s like a rainbow everywhere. You’d think it’d go away because of the wind but it keeps on coming. I think it’s stuck in the docks,” Villalobos said. “The oil spill came and [the cleaners] put a substance on top to put all that oil to the bottom. Now you just see the sheen of substance and different stuff than oil. You see the fuel and other toxin stuff that won’t go down because it’s too heavy.”

Judy Lott, a Wilmington boater who attended the March 25 meeting, said her boat is covered in oil and she could not afford to pay for the haulout and cleanup.

“Come what may my boat has to be hauled. It’s got oil on it. The bumper has oil on it. The docks have oil on them,” Lott told The Log. “[The oil spill] was the cause; we’re very meticulous about our boat. There are so many chemicals here. I want to find out who’s going to assist and help pay for the haulout of my boat.”

Lott agreed with Griffin’s idea of cleaning the water before attending to the boats.

“When you put [the boats] back into the water I want to be sure [the chemicals] are gone,” Lott said.

“[Istra Ace leaves] and they go on to make a billion dollars for the rest of the year and the residents of Wilmington, especially those here in the harbor, are left to deal with it,” Musante said. “I think that is symptomatic of the problem that goes on in the harbor.”

Musante questioned whether Wilmington’s elected representatives – such as Hahn and Los Angeles Council member Joe Buscaino, among others – are doing enough to address boater’s issues in light of the oil spill.

“Not one single elected official, on any level, contacts the constituents, and says here’s what happened, here’s what we’re doing about it, and here’s how we’re going to make you whole,” Musante said. “What I’d like to see is the Congresswoman do something with the Coast Guard and let us know how this harbor isn’t going to become the most toxic, disgusting harbor in America. You have residents here who won’t let their children dip their feet into the water.

“These elected officials care more about the oil companies than they do the residents,” Musante continued.

Hahn, whose congressional district includes Wilmington, coincidentally reintroduced pipeline safety legislation three weeks before the March 13 oil spill. The bill aimed to require pipeline inspections and third party verifications to prevent accidents similar to what happened in March 2014, when 1,200 gallons of oil reportedly leaked out of a pipeline owned by Phillips 66 and into the Wilmington area.

The Log reached out to Hahn’s and Los Angeles Mayor Eric Garcetti; neither returned requests for comment at press time.

The Port of Los Angeles is redirecting all inquires about the March 13 oil spill to the Coast Guard.

“Oftentimes, initial estimates can be inaccurate and should not be reported as the actual amount spilled,” the Coast Guard stated. “Typically, when calculating the amount of oil released, a variety of information is considered which may include amount of fuel oil transferred, fuel oil remaining onboard, areas of slicks or sheens observed, and the amount recovered.”

A persisting question is how does a local port work with vessels owned by an entity outside the United States or flying under a foreign flag? The Port of Los Angeles, for example, boasts being a green harbor, requiring companies based in San Pedro or Wilmington to abide by strict environmental laws. Istra Ace, however, sails out of the Bahamas and is owned by a Japanese shipping firm. Is the carrier required to abide by any environmental regulations? Could following regulations have prevented what the Coast Guard determined to be the ultimate cause of the spill?

“The lesson to be learned is you have to be very careful who you vote for,” Mosante said. “If you don’t pay attention and you believe the spin you don’t realize that the oil companies have the politicians. We need the oil here … [but] this is an industrial wasteland, the harbor. City Hall wants it the way it is because they make profits off boats like [Istra Ace]. Someone needs to fight for the people of this area.”

Anyone who believes they are affected by the oil spill and wants to file a claim can contact the responsible party at 888-850-8486.

At least three birds were injured by the oil spill, according to news reports.