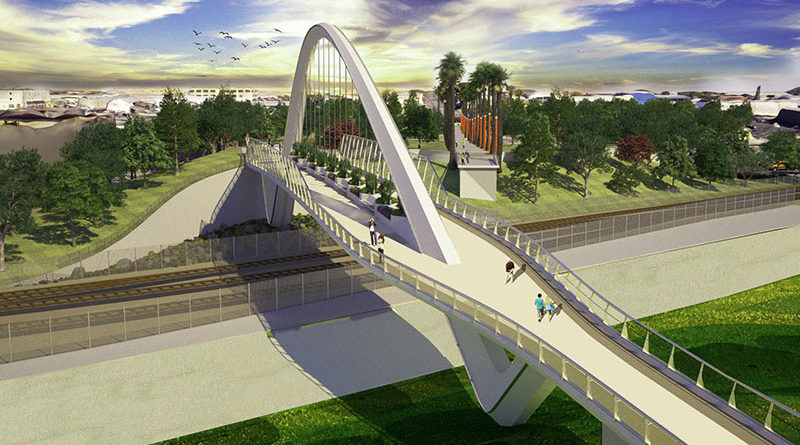 Design and timelines were discussed in the latest update on the $77 million Wilmington Waterfront Promenade and Avalon Promenade and Gateway projects.

SAN PEDRO―Design appears to be the latest sticking point for the Wilmington Waterfront project as the timeline is pushed back for one component and more public feedback will be taken on another.

Mike Galvin, the director of waterfront and commercial real estate at the Port of Los Angeles, gave a project update at the Oct. 3 L.A. Board of Port Commissioners meeting. He said the Wilmington Waterfront Promenade, which is the next project the port will start, has had some slippage on the schedule due to some design modifications to improve safety and access, specifically the stairway to the water’s edge.

“Looking at some different issues there to make sure everything is accessible and also that it is safe to access at the edge where the stairway goes into the water,” Galvin said at the Oct. 3 meeting.

Advertising for the construction of the Wilmington Waterfront Promenade was expected to start in the summer of this year. Galvin gave an updated project timeline, pushing the construction advertising to early 2020, with a 28-month construction period beginning in mid 2020 and still wrapping up as planned in 2022. Design plans for the about nine-acre Wilmington Waterfront Promenade include a 1,300-foot linear promenade, public restrooms, public pier, open space and play areas.

The Avalon Promenade and Gateway has had one significant advancement: Galvin said Valero will vacate the Los Angeles Department and Water and Power-owned eastern tank on the site by the end of the year and it will be demolished within the first three months of 2020, which is necessary for the development of the project.

However, the design appears to be a sticking point. Galvin said they are relooking at some of the design elements. Highlights currently include a sundial entry plaza, pedestrian bridge, open space and parking.

“We are relooking at some of the issues as a result of some of the input we received from some community groups,” Galvin said.

The Port of Los Angeles has held several design workshops since 2017, including a public meeting this summer. A second meeting was scheduled but postponed; Galvin said that was because they didn’t receive a large amount of unique responses at the first meeting. The port district said they reengaged the public for input in October, this time through online outreach. The port again sought input on design elements of the Avalon Promenade and Gateway and names for the projects and some of the streets in the area through an online survey.

The Wilmington Neighborhood Council has also provided design recommendations through a 2017 resolution, which among other things includes incorporating historic elements of Banning’s Landing, a Port Exploratorium and gathering spaces. That resolution can be found online at bit.ly/32HGnBP.

Representatives from the Wilmington Neighborhood Council and Wilmington Historical Society spoke at the Oct. 3 meeting, supporting that resolution and encouraging community members to read it. Commissioner Diane Middleton questioned if recommendations in that proposal were being considered. Galvin said they have been engaged with the Wilmington Neighborhood Council since receiving the resolution and they have responded on a point-by-point basis to everything in it. He said they are trying to balance that input with other community input.

“We’re waiting for the next piece of input to come in online and then we’ll see where we’re at,” Galvin said.

More updates are expected this month. Galvin said staff will be coming to the board in November with initial recommendations on projects going forward.

“We are continuing to move these projects forward and we really expect to be in the advertising mode in 2020 with the promenade project and are looking forward to breaking ground sometime next year,” Galvin said.