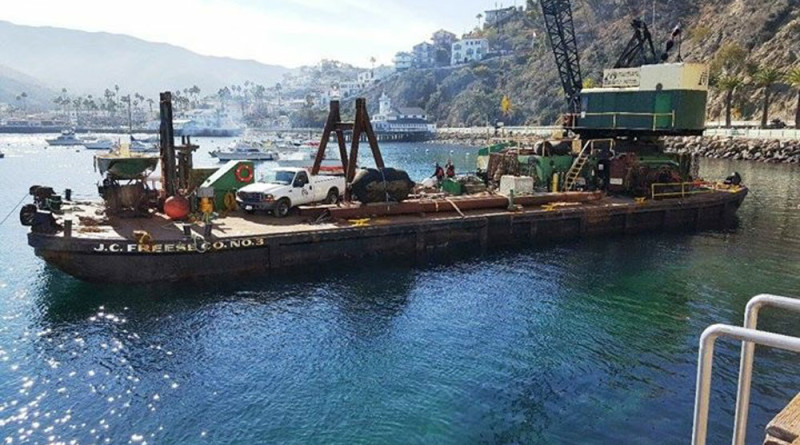 AVALON — Almost a decade of planning is finally becoming reality, as the aging fuel dock at Avalon Harbor is being torn down and replaced.

The Avalon City Manager’s office informed residents in a weekly update on Jan. 22 work on the fuel dock, which was originally built in the 1920s, is finally underway.

“The asbestos contractor finished abating the fuel dock building on [Jan. 18] and crews were tearing the building down the following morning,” the weekly report stated. “The contractor Associated Pacific conducted dive inspections on [Jan. 20] and their barge will arrive by Thursday Jan. 21 around noon. Exciting times in the harbor!”

Avalon city staff member Jennifer Monroe confirmed the barge, which serves as the base of construction operations, arrived. The barge included the new pier pilings and a crane, according to Monroe.

“The project is slated for completion May 18, 2016 and barring any significant weather delays will be in service prior to the summer season,” Monroe said.

She added boaters would have access to a temporary fuel dock during construction.

“A temporary fuel dock has been established at the Rescue Float, which is located between the Pump-A-Head Float and the Fuel Dock under construction. The temporary fuel dock has two 500-gallon tanks – one diesel and one gas; visiting boaters are encouraged to anticipate their fuel needs prior to departing the mainland for the island but are not expected to encounter delays when needing to fuel their vessels in Avalon,” Monroe said. “Marine fuel is still available at the Isthmus for boaters visiting the west end.”

Avalon has sought a new fuel dock since 2007. The California Coastal Commission granted the city $1 million in 2009 to help fund the fuel dock rebuild. Momentum picked up in 2011 when the city developed plans for a new concrete dock. The plans stalled, however, when the price tag for the concrete dock reached $3.2 million.

City staff and leaders revisited the fuel dock in 2014 and conjured up plans to update the marine infrastructure for about $2 million.

The new fuel dock is expected to be 108-feet-by-36-feet and take up the same footprint as the old venue. Plans also call for workers to remove 74 decaying timber piles and replace them with 55 bearing piles and 19 fender piles.

Recreational boaters and tour boat operators regularly use the fuel dock pier, which is located adjacent to the Casino building.

A temporary fuel dock was set up near the construction site for boaters to fill up will the new structure is being built.

There are four existing fuel storage tanks located on land and next to the pier, according to a Coastal Commission staff report. The report added the storage tanks would not be in service during construction.

Work is expected to be complete in the next few months and ahead of Catalina’s peak visiting season. Eelgrass will not be impacted by the construction work.