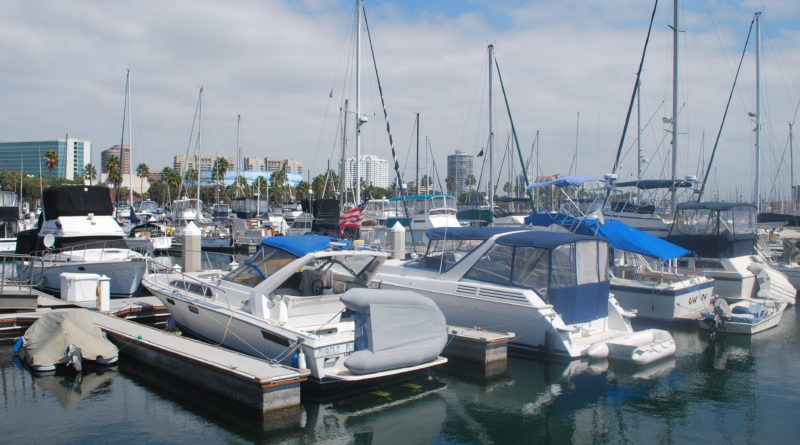 Being a liveaboard has its perks – and challenges. What’s it like living among other boats, especially when you don’t always see the people you live next to?

LONG BEACH—The second edition of The Log’s Nautical Banter column is here. Our editor, Parimal M. Rohit, sits with OC Weekly’s Sales Director, Kevin Davis, to talk about being a good neighbor while living aboard a boat.

Kevin, if you recall from our first column, is a liveaboard at Long Beach’s Shoreline Marina. Parimal and Kevin continue to have explorative discussions about key boating topics. Do you have a topic you’d like to have them discuss and deliberate? If so please email your suggestions to parimal@thelog.com.

Parimal M. Rohit: We’re aboard your boat, which is named …

PMR: And that’s named after …

KD: My wife being from Indianapolis.

PMR: How long have you been living here in Long Beach?

PMR: And on the boat?

PMR: So in 7 years you’ve clearly had a chance to get to know the people around you. You’re here in a pretty big marina. Explain the relationship you have with your immediate neighbors. How often do you talk with them, see them, are they liveaboards, too?

KD: Well, liveaboards are supposed to be separate by so many boats, things like that, but it doesn’t always work that way. Folks like the folks next door to us, they come down every once in a while and take their little boat out. Folks (on the other side of us), we’ve known them for a while, but you just get to know everybody at some point.

PMR: You mentioned liveaboards are spread apart. Clearly there are people who are close to you who aren’t liveaboards. Is there a certain responsibility that falls on you to keep an eye out for boats to your left, to your right?

PMR: What expectations do boat owners have of you as a liveaboard?

KD: We all kind of respect each other, but you’re always on the lookout for any kind of issues that might come up, whether it be strangers that are down on the dock that shouldn’t be down here, or people that you’ve never seen on other people’s boat, you’re always watching out.

Then you also got weather, especially when you have high winds and things. You see a lot of people, especially the jibs that come undone. When those start to break up, you can lose a jib sail real quick in the wind. It’ll tear and just destroy the sail. And they’re not cheap [to replace].

We’ve seen boats, they’re taking on water, and you call the marina. You want to try to salvage somebody’s boat, but also you want to make sure that a lot of the chemicals in the boat – the oil and the diesel fuel and stuff like that – don’t also spill out.

PMR: Are there times when you’ve had a conflict with your neighbors? How are those conflicts resolved?

KD: Every once in a while maybe a little bit more of a noise, sometimes, especially during the work week and other people aren’t working but they might be down for vacation, they’re having a party and having a good time. Living on a boat, you got your regular Monday through Friday routine, and you get people who are partying and being a little loud and obnoxious, it’s just part of the territory, you just kind of suck it up a little.

Now if you have certain people around you who aren’t being respectful, it’s okay to raise your head up and say, “hey, do you mind toning it down a bit? I have work in the morning.”

PMR: Let’s go to the other end of the spectrum. Has there ever been a time where there has been a strong sense of community, in terms of coming to the aid of someone on the docks or at a slip? You know, where there’s no one around to act and you have to step up?

KD: A few years ago there was a lady, on the next dock over. [My wife] and I were coming back from walking our dogs and we heard this lady yelling, a dock over. She had a big dog, and the dog had fallen in the water. It was an older dog, and the lady wasn’t strong enough to pull the dog up. The dog had been under the water for at least a good minute. She was in the water trying to get the dog out. She’s screaming for help. Me and one other younger guy that was on her dock, we ran over and we pulled the dog out. At the time the dog was lifeless. Between me and this young kid, we basically performed CPR and brought the dog around. She took it to the vet and we never heard anything else about it, but it was just one of those things, you see people in need, you’re gonna help people.

You just kind of keep an eye out on people, all the time, because you are living over the water, and it’s dangerous.

PMR: So let’s talk about etiquette. What is the etiquette about having pets as a liveaboard? Are there any unwritten rules?

KD: Absolutely. You always want to keep your animals quiet. You don’t want them to be a pest to anyone. It just goes to being respectful to anybody and everybody.

PMR: If I’m a novice boater or if I want to give this liveaboard thing a try, what suggestions would you have for me, to be a better neighbor?

KD: If you’re going to be living on a boat, and you plan to take the boat out, regardless if it’s a powerboat or sailboat, I recommend, go get some classes. Learn how to take your boat in and out of the slip. People that don’t think about the difficulty of bringing a boat in or out of the slip don’t realize that it’s not just your boat that you have to be concerned about, it’s all the other boats you may run into, and if you don’t know what you’re doing, you can really mess up your boat and you can mess up someone else’s boat.

PMR: Is there a general rule of how often you should take your boat in and out of your slip or the marina?

KD: There are certain things you always want to do. You want to make sure that you’re running your engine ever so often, especially if it’s a diesel engine. Diesel fuel has a tendency to get old after awhile. For us, we probably get out once a month, or at least try to. We might go out for only a couple hours, and other days we might just go out for the whole day and stay out.