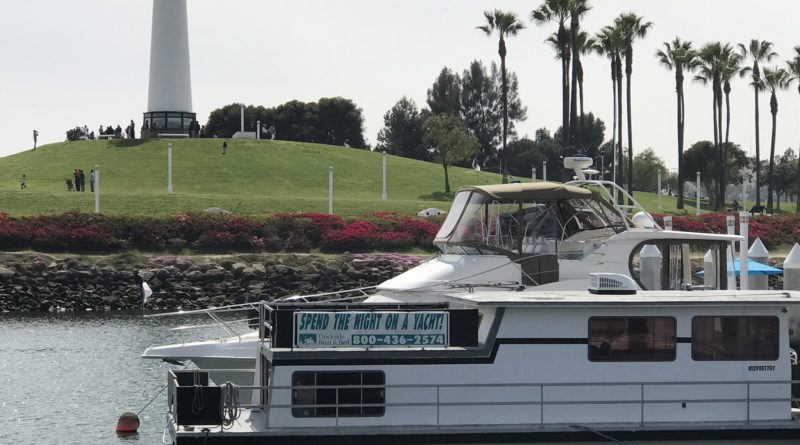 Calling your boat a full-time home might seem romantic, but the lifestyle comes with many sacrifices.

EDITOR’S NOTE: We’re introducing a new column in The Log – Nautical Banter. The column will feature a once-a-month conversation with The Log’s editor, Parimal M. Rohit, and OC Weekly’s sales director, Kevin Davis. Kevin is a full-time liveaboard in Long Beach. Parimal and Kevin will have conversations every other issue, exploring some of the practical topics affecting everyday boaters.

FOUNTAIN VALLEY–The romanticism of living aboard a boat could be rooted to the long-running 1980s television show, “Miami Vice,” where one of the program’s two main characters – Sonny Crockett – lived aboard his sailboat in Miamarina. Crockett, who was portrayed by Don Johnson, even had a pet alligator aboard his sailboat home. Johnson might have made living aboard a boat seem cool and easy, but he only played a liveaboard on television. The reality is being a liveaboard is a full-time commitment. It’s a lifestyle enjoyed by those who do it every day, but there are choices and sacrifices to be made. Kevin Davis, OC Weekly’s sales director, sits down with me to discuss the decision he and his wife made a few years ago to leave his 1,000-some-square-foot condominium and live aboard his 34-foot sailboat in Long Beach. (They brought their three pets on board, as well.)

Parimal M. Rohit (PMR): Let’s talk about being a liveaboard and downsizing. First give us some context of where you were before you moved onto your sailboat.

Kevin Davis (KD): We were in a thousand-square-foot condominium and had all the normal things you could possibly imagine: couch, loveseat, bed, TV, entertainment center dining table – all the things you would normally see in a regular house. Plus, you have a ton of closet space, too, that you have a lot of clothes. You just have all the things you want to keep as an individual, including all kinds of memories. You don’t realize how much stuff you have until it’s time to truly downsize.

To go in from a thousand-square-foot condominium to a 34-foot boat with 11-and-a-half feet at the beam, there are a lot of things you get rid of. Number one, you don’t bring furniture onto a boat. Everything’s built in.

PMR: So, all your furniture is gone.

KD: All your furniture is gone. You don’t need your decorations anymore, either. You certainly don’t need an 80-inch big screen TV. The number of clothes, too. You only have so much closet space. There’s a lot of stuff that you fold. You don’t need that much clothing anymore. Furniture, clothing, you gotta pull it way down. You can’t carry a lot of boxes with you.

PMR: Sounds like being a liveaboard is one way to reduce the amount of clutter you have around you!

PMR: And it’s not just clothing or furniture or boxes – you also reduce the items you’d otherwise have in your kitchen.

KD: Dishes, coffee cups, glassware – don’t really want to carry glassware too much on a boat. Cooking utensils [and] utensils in general, you gotta get rid of a lot of stuff, because you don’t need a setting of eight and tableware. Your oven – small. You only need so many pots and pans. Your refrigerator, you’ll only be able to buy so much food. And it’s not a true refrigerator. It’s called a cold box. Ice is a commodity.

PMR: If you had to put a number on it, what would you say is the percentage decrease of what you had in the condo to what you have now on your sailboat?

PMR: So, 90 percent has been eliminated.

PMR: What was the hardest part of the adjustment, detaching yourself from 90 percent of what you once owned?

KD: Getting rid of the stuff and letting go of things you may think are important to you or you might need, that’s the hardest part. But kind of set yourself a rule of thumb, “have I really used this or am I going to use this?” – and it’s tough sometimes, you have to make some tough decisions. I may want it, but is it really functional on a boat? You start having less and rely upon less – it’s invigorating. It makes you feel good. If you bring something aboard your boat, you’re taking something out.

PMR: Obviously you can sell the things you’ll get rid of, but when you’re downsizing, what else can you do with all that you won’t be bringing aboard your boat?

KD: There are a lot of people out there who have friends. Lots of friends need things. There are lot of charities that need things, too. Donating your stuff to charity is also good.

PMR: A little dose of reality. Obviously, there is a romanticism about being a liveaboard. But give us a real dose of what it’s like to be a liveaboard. It’s not a lifestyle for everyone, right?

KD: You gotta be social when you live on a boat. You never know who you’re going to slip next to, who’s going to be down for the weekend or throughout the week. You gotta be able to be social with people. And you never know who you might need to count on, and vice versa. You don’t want to be a stranger with people around you. You’re always watching other people’s boats … and hopefully someone is watching out for yours. It’s tiny living.

You gotta live a life less complicated. You gotta enjoy being outside.

PMR: So, for you and your wife and your pets, is this the life for you?

KD: We love it. We decided to make it our life, our lifestyle, and plan to eventually retire and sail the boat down to the Sea of Cortez and see where things may take us. It’s a commitment for us.

3 thoughts on “Nautical Banter: Less is More as a Liveaboard”