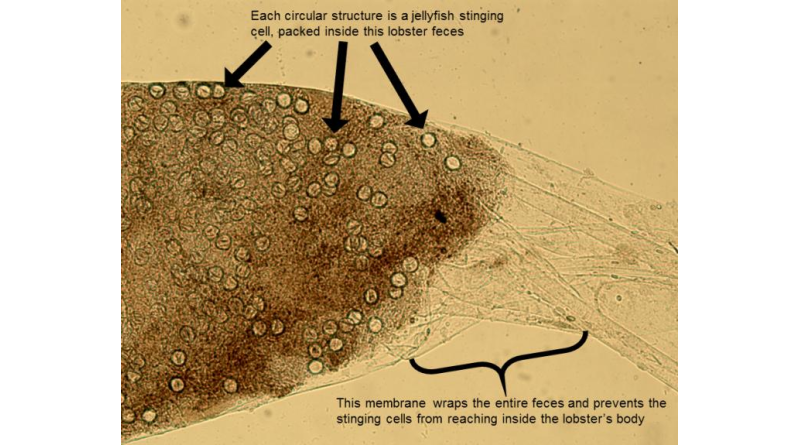 Empty circles are the nematocysts, or stinging cells, of jellyfish that have been packed together and wrapped tightly into packages of feces in the beginning of the lobster's digestive tract. The membrane, which can be seen extending off to the right side of the image, is a mechanical adaptation to prevent lobsters from being killed by their venomous food.Image by Kaori Wakabayashi of Hiroshima University, originally published in Plankton and Benthos Research

Researchers at Hiroshima University may have uncovered the reason why lobsters can dine on jellyfish without getting stung: Well-wrapped feces.

A research group led by Kaori Wakabayashi raised lobster larvae and jellyfish in the laboratory feeding the lobsters only meals of Japanese sea nettle tentacles. They then suctioned up the lobster feces and examined it under a microscope. What they found were layers of a peritrophic membrane wrapped around the feces.

It’s the membranes that are preventing the stingers from reaching the lobster and being injected by venom.

According to the report originally published in Plankton and Benthos Research, in the early stages of a lobster’s life – before they form those recognizable red shells – the larvae of slipper and spiny lobsters are almost transparent and are the size of an adult’s thumbnail. Lobster larvae spend its formative years riding on the bodies of jellyfish and eating them alive, including the venomous portions of the tentacles.

Although a lobster’s intestines are lined with the same plates of chitin that cover its body, the armor does not cover the midgut; leaving this area open to stingers.

Wakabayashi’s findings builds on his study of lobster development with a goal of creating a food source for farmed lobsters as their nutritional needs remain unknown.

“Based on the contents of their feces, we think that the lobster larvae only digest fluid-type foods, which is vital to know as we develop an artificial food for farmed lobsters to grow efficiently and healthily,” said Wakabayashi in a report published in ScienceDaily.