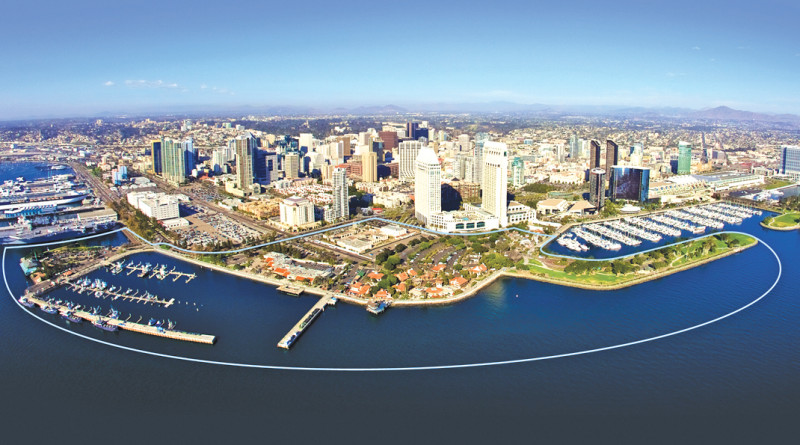 10-month selection process ends with Gafcon being selected to develop about 70 acres of land along harbor.

SAN DIEGO — Attempts to create a world-class destination along the downtown San Diego waterfront inched closer to reality Nov. 8, when the Port of San Diego’s Board of Port Commissioners selected Gafcon, through its 1HWY1 proposal, to redevelop 70 acres of land and water at Seaport Village into a visitor-serving gathering place.

The 1HWY1 proposal would bringseveral entities together to build a boater-, tourist- and visitor-serving project at Seaport Village. Plans call for marina dockage for 24 mega-yachts, 51 commercial vessels and 82 recreational boats at Tuna Harbor, office spaces and a charter school offering marine education.

The project, according to reports, would take about 10 years to complete and cost $1.2 billion. Construction could start as early as 2020.

Commissioners acknowledged while changes to Gafcon’s proposal would occur, they hope the developer’s overall vision will be realized.

“Is this a $1.2 billion deal today, and a year from now, and two years from now and five years from now? [What if] it becomes an $800 million deal because we can’t raise the funds or something happens,” Board of Port Commissioners Chair Marshall Merrifield asked. “What I’d hate to see is, in this process and the changes that go on, whatever they may be, for us to have something less [than what Gafcon is promising to deliver].”

“The reason that this particular proposal received such strong support is because … those of us who had been working on this for years … saw it, I knew it best reflected the work we had been doing for a long time,” Castellanos said.

Gafcon’s proposal was attractive to port commissioners due to its detailed financial analysis and proposal.

“The project components were bold, creative, compelling, iconic, dynamic and well-thought out. I particularly liked the well-designed expansions of the public realm area,” Malcolm told his colleagues. “This project spoke to me as truly a world-class project.”

The 70-acre stretch of waterfront primed for redevelopment includes prime Downtown San Diego properties such as Seaport Village, Chesapeake Fish and surrounding areas between the Hyatt and the USS Midway Museum.

“There are a lot of expectations now,” Merrifield said. “We need to gather to make this a big, beautiful, wonderful place for San Diego, but not a half-beautiful space for San Diego.”

1HWY1 is the latest in a series of revitalization or redevelopment projects the port district is either in the process of executing or considering for approval. The to-be-created 1HWY1 entity would include Gafcon, waterfront developer RCI Marine Group, aquarium operator OdySea and observation attraction developer and operator ThrillCorp.

Port district staff has expended quite a bit of effort in trying to get the Chula Vista Bayfront redevelopment project rolling.

Other projects are in the works at Harbor Island and Marriott Marquis Marina.