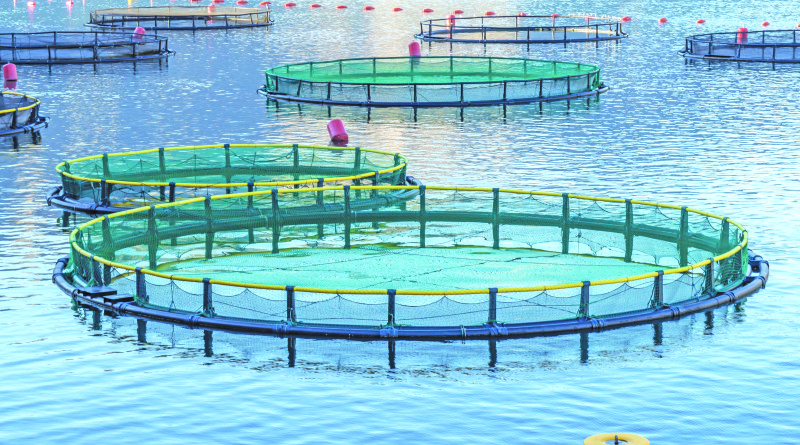 Fish farms could come to ports in San Diego and Los Angeles, but industry growth and regulation is still a work in progress.

SOUTHERN CALIFORNIA — The future of seafood consumption in the United States, dependent upon who you ask, will either be enhanced or inhibited by domestic offshore fish farming, or open ocean aquaculture. Is aquaculture here to stay? Or are there too many problems associated with aquaculture production for the industry to become a viable and long-term option?

Commissioners and staff members at the San Diego Unified Port District have actively sought out aquaculture business opportunities in recent months. Open ocean aquaculture projects could also be realized at the Port of Los Angeles and near Catalina Island, according to USC Dornsife.

Port of San Diego staff and other agencies/organizations studying the future of aquaculture in California and the U.S. say about 91 percent of our consumable seafood is imported. Aquaculture production accounts for about half our imported seafood, according to port officials.

Aquaculture and the Port of San Diego

A few months ago the Port of San Diego’s Board of Port Commissioners received an update from district staff members of potential business opportunities in the aquaculture space. Pursuing aquaculture – or blue economy – opportunities would help reduce the nation’s seafood trade deficit while increasing domestic production of fish and similar items, port district staff consistently maintained.

“This opportunity is primarily being driven by the growing global demand for seafood and the lack of a domestic supply,” port district staff stated. “While there is a clear food production component to this demand, aquaculture offers multiple co-benefits, such as fisheries enhancement [and] ecosystem restoration, [among others].”

“Aquaculture is the wave of the future,” Commissioner Dan Malcolm said after a presentation on the issue at the commission’s August board meeting. “We talk a lot about sustainability, we talk a lot about carbon footprint, environmental matters. What’s the carbon footprint of the seafood on your plate? [An estimated] 91 percent [of our consumed seafood] is grown on foreign shores.”

The future of aquaculture in Southern California is the subject of two workshops studying the industry’s potential growth.

California Sea Grant, a partnership connecting federal and state officials with academics, was awarded funding in October to study emerging issues in aquaculture. One workshop will focus on permitting and monitoring, while the other would facilitate a discussion resource managers and aquaculture professionals in hopes of spurring coastal economic revitalization.

Aquaculture could help reduce the nation’s seafood deficit and provide us with a sustainable food source, California Sea Grant’s members have consistently maintained.

A 2015 Aquarium of the Pacific report shared by California Sea Grant identified seafood as a major source of protein for about 3 billion people worldwide. Food production must be increased to keep up with Earth’s growing population, the report stated. The capture of wild-caught fish, at current rates, would not be able to keep up with increasing demand for seafood, the report forecast.

“A desire for seafood, coupled with growing and more affluent global populations … has created a dramatic increase in seafood demand. Wild-capture fishery harvests have remained essentially flat since the late 1980s and have been unable to satisfy growing demand,” the Aquarium of the Pacific report stated. “Since then, seafood consumption has roughly doubled and this was made possible in part through increasing production of farmed fish, shellfish, and aquatic plants.

“As it has for the past 25 years, aquaculture will play a substantial role of meeting society’s need for increasing food supplies into the future,” the Aquarium of the Pacific report continued.

Paul Olin, an extension specialist with California Sea Grant, said the United States seafood trade deficit is $14 billion, with about 90 percent of our seafood supply imported.

He added the expansion of aquaculture opportunities in U.S. waters would bring higher quality seafood to our markets and benefit local businesses.

“Right now, our ability to meet America’s demand for seafood falls far short of demand. When our seafood comes from American waters, it’s fresher, it helps local economies, and our businesses follow some of the highest environmental standards in the world,” Olin said in a released statement.

While some see aquaculture as a means to maintain a sustainable food source others argue the fish farm industry is unhealthy for humans and the environment.

Food and Water Watch, an advocacy and lobby group founded in 2005, published a blog post in 2013 outlining aquaculture’s potential pitfalls.

“Factory fish farming — also known as aquaculture — is generally big, dirty, and dangerous, just like factory farming on land,” the Food and Water Watch blog stated. “Massive amounts of antibiotics, hormones, and pesticides are required to keep disease at bay just to keep fish and shrimp alive in overcrowded conditions (typically in nets, cages, or ponds). The risk of contamination is high, both to the surrounding water and within the enclosures themselves.”

“Uneaten fish feed, fish waste, and any antibiotics or chemicals used in fish farm operations flow through the cages directly into the ocean. This can significantly harm the ocean environment,” Food and Water Watch staff stated in the 2013 blog post. “Caged fish can escape and compete for resources or interbreed with wild fish and weaken important genetic traits. Farmed fish can spread disease to wild fish.

“It can take several pounds of wild fish to grow one pound of farmed fish. This undermines the wild marine food chain,” the blog continued.

Eric Hallerman of Virginia Tech’s Department of Fisheries and Wildlife, in a 2008 report published by the United Nation’s FAO, said aquaculture can be beneficial to our future food supply. Determining the likelihood of harm from aquaculture products, however, was difficult to quantify, according to Hallerman.

He added the risks associated with seafood consumed from fish farms are still being studied and not yet fully understood.

“Recognition that aquaculture poses genetic harms to natural populations is relatively recent and has not received a high level of attention by governmental and intergovernmental agencies,” Hallerman said.

He continued exposure to harm could be minimized by restricting the physical and reproductive confinement of farmed fish while also following best management practices.

The one-time senior advisor on food policy for former Los Angeles Mayor Antonio Villaraigosa stated aquaculture does have value in improving our seafood supply but consumers should be vigilant in tracking how fish ends up on their plate.

Paula Daniels, who published a report on aquaculture with Durfee Foundation’s Stanton Fellowship after her tenure at L.A. City Hall, acknowledged there are several environmental hazards associated with aquaculture production, including coastal modification associated with cage finfish culture, genetic modification of species caused intermingling of wild and farmed fish, spread of disease and parasites to wild stocks, and possible algae bloom events caused by improper management of waste.

However best management practices and production improvements are being realized thanks to a growing body of university research, Daniels stated.

“There seems to be agreement among environmentalists that organic standards could be developed for closed systems, ‘where inputs, outputs, health and animal welfare can be monitored and controlled,’” Daniels wrote in her report.

“Industrial aquaculture remains a subject of great controversy in the United States and abroad. This is because it carries with it a plethora of well-known adverse environmental and intertwined socioeconomic consequences,” the federal lawsuit claimed.

The lawsuit alleged several harmful effects of aquaculture, including the risk of farmed fish escaping from their containment and “the spread of potentially deadly diseases and parasites from aquaculture facilities to wild fish and other marine wildlife.”

The dust has yet to settle and the future of aquaculture is still taking shape, especially in developing oversight policies and funding opportunities.

Nonetheless Daniels believes aquaculture is a viable solution for our future food supply.

“Aquaculture, like any form of agriculture, can be done sustainably,” Daniels wrote in her 2014 report. “It is a matter of how the farmer chooses to farm, and it is as valuable with farmed fish as it is with other food, to know your farmer.”

2 thoughts on “Aquaculture: Option for Sustainability or Unhealthy Model?”