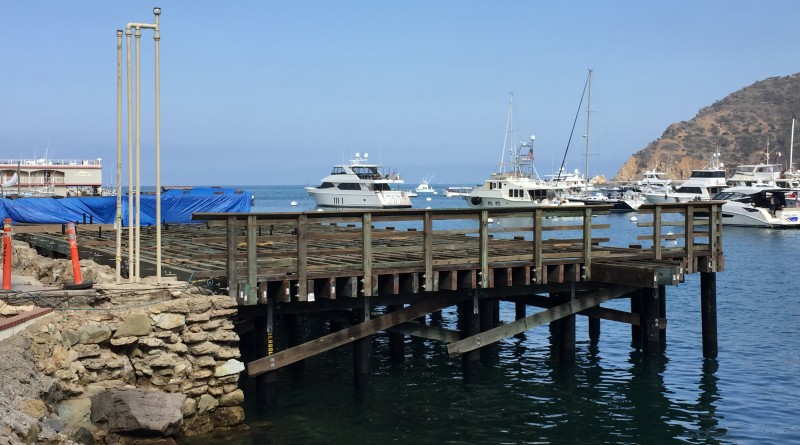 Owners of eatery near fuel dock and the Casino will be able to continue doing business on waterfront.

AVALON — Negotiations between the city of Avalon and owners of Casino Dock Café have finally reached common ground as council members approved a lease agreement between City Hall and the waterfront eatery on Oct. 4.

The café by the city’s boat fuel dock, operated by Russell and Jenny Armstrong, was closed temporarily as part of a larger renovation project to upgrade the eatery and boating gas station. It was torn down as part of the project to rebuild the boat fuel dock.

Terms of the agreement call for the Armstrongs to pay the city of Avalon a rent $4,000 per month or 8 percent of gross receipts, whichever is higher. The lease, which attached a consumer price index (CPI) increase to the base rent, is for 15 years with two five-year options. Casino Dock Café must stay open for nine months out of the year, weather permitting.

The new terms were based upon the assumption the Armstrongs would build the café’s structure.

Avalon city staff originally proposed a 15-year lease with two five-year options, with a monthly rent of $6,399 or eight percent of gross receipts, whichever was higher.

“This 15-year lease with two five-year options and us building the building, it just does not pencil out,” Russell Armstrong, with his wife by his side, told council members. “We’ve had numerous discussions; we’ve done the research on it.”

The Armstrongs estimated it would cost them $250,000 to build the shell of the new café and another quarter-million to fill out the restaurant.

City Attorney Scott Campbell said construction of the new café would cost about 30 percent more, due to prevailing wages, if Avalon City Hall fronted the money to construct the building.

Russell Armstrong told the council he would have to increase his business 52 percent within the first year alone in order to meet Avalon’s proposed terms.

“I just don’t see how we could do that,” he said, adding profit margins in the restaurant business are small, making it difficult to both construct a building and make payments on the city’s lease terms.

The council also heard from Jenny Armstrong, who explained there is no way the city’s proposal would work for any business.

“Our best year out there, after 20 years … would make the rent you want to charge on the square footage at about 12 percent [of the gross]. We couldn’t sustain it,” she told council members. “There is no way a restaurant could sustain a 12 percent rent.”

“You folks just really don’t understand the restaurant business and how marginal the profits are,” Russell Armstrong continued, stating profitable restaurant ventures rarely yield margins more than 7 or 8 percent. “Last year, my wife and I, working full-time, tremendous amount of hours, we did five-and-a-half percent. That was our profit, pre-tax.”

City Manager David Jinkens said businesses such as Casino Dock Café should be promoted in Avalon.

“Retaining family-owned businesses in Avalon helps keep a healthy diversity of businesses and business interests,” Jinkens said in his report to council members. “Public policy should be based on providing the maximum benefit and opportunity to the most people in the community, not just powerful interests. City government does not have to operate like a large corporation that seeks only the maximum dollar for everything it does irrespective of its impact on the community.”

Complicating matters is the weather. Casino Dock Café generally goes dark a few months each year due to rainy weather.

“It’s a very seasonable venue. There’s [very little] interior space,” Russell Armstrong pointed out, indicating the café would not be able to operate during cold or wet climates in winter and early spring.

The fact the Armstrongs would spend $250,000 to build their own building should be something the city factors into the lease negotiations, said Mayor Ann Marshall.

“This place is different from the others because they’re actually building the building,” Marshall told her colleagues.

The Armstrongs, throughout the meeting, stated they were willing to find some sort of middle ground with city leaders. Conversely there were moments when council members wondered if the city should solicit proposals from others who would be interested in operating a business by the Casino.

“The better we do, the better you do,” Jenny Armstrong told council members.